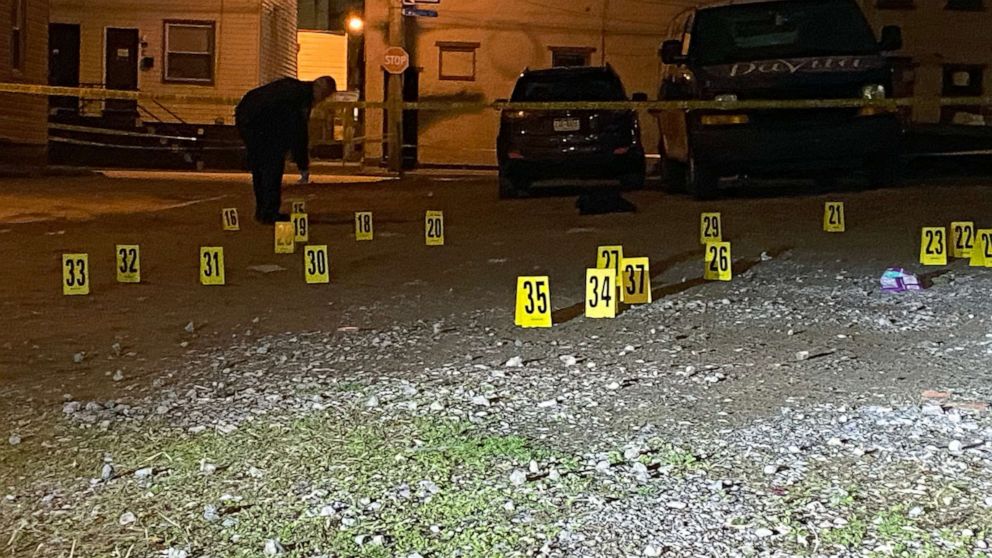 Two teenagers were killed and at least eight people were injured when a barrage of 50 gunshots rang out early Sunday at a Pittsburgh Airbnb rental home, where police said about 200 people were having a party. Some escaped the gunfire by jumping out of windows.

The shooting marked third time in nine days that gunfire erupted at parties held at Airbnb rentals, including one near Sacramento, Calif., that left a teenage boy dead, and another that rocked a residential neighborhood in suburban Houston.

The Pittsburgh shooting unfolded around 12:30 a.m. Sunday when police were notified of multiple ShotSpotter gunshot detection alerts in the East Allegheny neighborhood on the city’s North Side, according to the Pittsburgh Police Department.

Cellphone video taken from inside the packed house and obtained by ABC News captured the screams and panic of revelers rushing out of the residence, some tripping and falling down a flight of stairs.

In the footage, someone is heard shouting, “He’s got a gun!” and “We have to go!” As apparent gunshots rang out, someone shouted, “They’re shooting!” The screams were followed by howls.

Victims with gunshot wounds were found near the house and taken to hospital by ambulance, police said. Other gunshot victims were taken to area hospitals in private cars, including two minors who were pronounced dead on arrival at the emergency room, authorities said.

A total of 10 people were shot, including the two teenage boys who were killed, police said. The Allegheny County Medical Examiner’s Office identified the deceased as Mathew Steffy-Ross and Jaiden Brown, both 17 years old.

Several other victims suffered broken bones and cuts as they fled the chaotic scene, police said.

Police said a preliminary investigation revealed the shooting occurred at a large party at the short-term rental property, “with up to 200 people in attendance, many of whom were underage.”

“As many as 50 bullets were fired inside, prompting some revelers to jump out of windows, sustaining injuries such as broken bones and lacerations,” police said in a statement on Sunday. “Several shots were fired outside the house.”

No arrests have been made and detectives are examining evidence found at eight different crime scenes within a several-block radius of the Airbnb home. Detectives are also reviewing security video in an effort to identify suspects.

At a news conference on Sunday, Pittsburgh Police Chief Scott Schubert said the gunfire started after an “altercation” and confirmed that multiple shooters engaged in a shootout. He said that in addition to the gunshot victims, five other people were injured by jumping out of windows or falling down stairs as they took cover.

“It’s our top priority to find out who did this and get them off the streets,” Schubert told reporters.

He noted that the “vast majority” of those at the party were minors.

“This is something that shouldn’t have happened. It comes down to the fact that there are too many guns — too many illegal guns — on the streets. Too many people who have access to these illegal guns “, he added. “Innocent people have been beaten… We are sick of it, and we will do everything we can to hold those responsible accountable.”

“We share the Pittsburgh community’s outrage at this tragic gun violence. Our hearts go out to all those affected, including loved ones of those who lost their lives, injured victims and neighbors,” said Airbnb told ABC News in a statement Sunday. “Airbnb strictly prohibits parties, and we condemn the behavior that allegedly caused this criminal gun violence.”

Airbnb said the person who booked the house was banned for life from Airbnb. The company confirmed that an “unauthorized party” was held without the knowledge or consent of the house host, who specifically stated in the listing page that no parties were allowed and that any evidence of a party would incur a $500 fee.

“We will review all legal options to hold this individual accountable,” Airbnb’s statement said, adding that the company is cooperating with the Pittsburgh Police Department’s investigation.

Responding to allegations that many of the party attendees were underage, the company said, “We can confirm that users must be 18 or older to create an Airbnb account.”

The company also noted that its CEO, Brian Chesky, has joined a nationwide coalition of CEOs calling for tougher gun control measures to get illegal guns off the streets.

Pittsburgh Mayor Ed Gainey said in a statement Sunday that police are using all available resources to track down those responsible for the shooting and added that members of the community have contacted investigators with information about the episode.

“Now is the time for us to act with a sense of urgency to bring justice to the victims and peace to our city,” Gainey said. “It is essential that we come together now to help reduce the violence that is happening now as we begin to do the long-term work to end the culture of violence that enables the senseless loss of lives that we are experiencing today. ‘today. We must say no more and never again.”

Anyone with information about the shooting can call the Pittsburgh Police Department Major Crimes Unit at 412-323-7161.