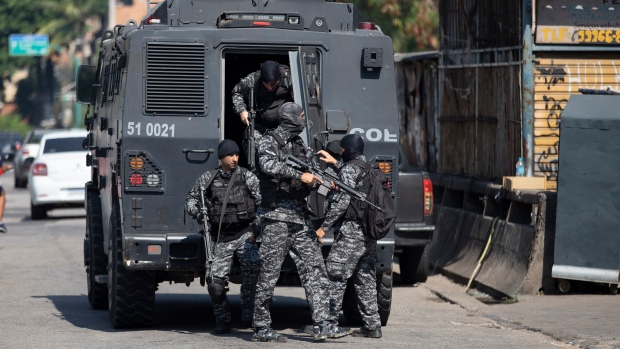 RIO DE JANEIRO – At least 25 people, including a policeman, were killed Thursday in a shootout during an operation against drug traffickers in the Jacarezinho slum in Rio de Janeiro, police said.

Suspects attempted to escape through rooftops as police entered the slum in armored vehicles and helicopters flew overhead, TV footage showed. The intense firefight kept residents in their homes.

Three policemen were shot and one died of a head injury in hospital, police said.

Bullets fired in the shooting hit a light rail coach and two passengers were injured by shards of glass from the shattered window, firefighters said.

It is the deadliest police operation in the state of Rio de Janeiro, which has suffered for decades from drug-related violence in its slums known as the favelas.

“This is the highest death toll in a police operation in Rio, surpassing 19 in the Complexo do Alemão slum in 2007, except that we did not lose any of our own in this action,” told Reuters Police Chief Ronaldo Oliveira.

Police said among the dead in Jacarezinho were gang leaders of drug traffickers who dominated life in the slum. At least 10 suspects have been arrested, they said.

Besides drug trafficking, the gang stole trucks of their cargo and hijacked commuter trains earlier this year to steal passengers.