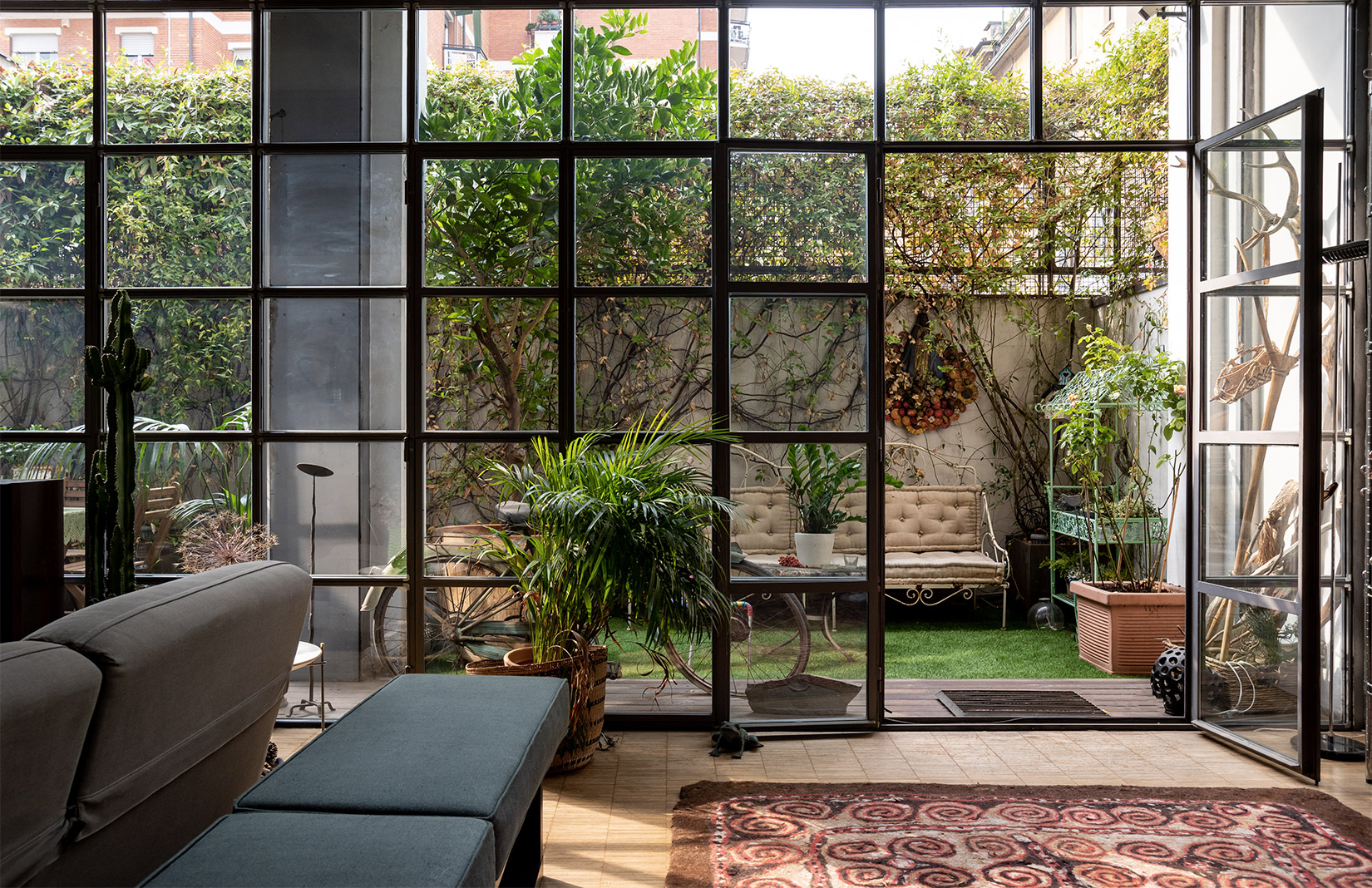 Milan has a wide range of homes worthy of the city’s status as the fashion and design capital of Italy. As an industrial and cultural powerhouse, it boasts architecture through the ages, from palaces of yesteryear to rugged industrial lofts and mid-century pads. Here are nine of the best apartments for rent in Milan right now.

An apartment with a courtyard in Chinatown

Floor-to-ceiling windows flood the living room of this Milanese holiday home with light. Its double-height living space is decorated with pops of color and the owner’s art collection, while a mezzanine master bedroom space is located above. The two-bedroom bolt-hole is on Via Lomazzo, between Chinatown and the Bullona district which is full of cafes and restaurants. It also has its own private courtyard to sit and enjoy a morning coffee.
Price on request via onefinestay

Sitting on Milan’s historic canal, this converted warehouse studio exploits every last inch of space through clever design tricks. A suspended bed descends from the beamed ceiling, while the shelves have been kept at ground level so as not to give the impression that the pied-à-terre is cluttered. A small balcony overlooks the canal, and the industrial tables can be set up as a ping-pong table.
£ 58 per night via Airbnb

An apartment in a converted marble workshop

Milan is full of innovative adaptive reuse projects and this marble workshop is a prime example, now reborn as a bright house. The old workshop is near the Saint-Christophe church and features high double-height ceilings and double glazed doors that lead to a courtyard covered with vines. A wrought-iron spiral staircase leads to the sun-drenched bedroom.
From 135 € per night via Airbnb

With its coffered ceilings, modernist furnishings and color palette, this Milan apartment is a throwback to mid-century Italian design. It is located on the site where the great Italian literary Alessandro Manzoni was born, a short walk from the city’s shopping district.
From £ 170 per night via Airbnb.

Warehouse by the canal on Via Pestalozzi

The rough walls and concrete surfaces pay homage to the industrial roots of this warehouse. The monochrome house has been slightly transformed for its new role, with ghost partitions and skylights intact. It is located next to the Ripa di Porta Ticinese canal and has a completely open lower level. Meanwhile, the bedroom is nestled under wooden beams on the mezzanine level overlooking the double height living room. Take a closer look.
Price on request via onefinestay

This apartment is inside a former 16th century convent designed by Renaissance architect Bramante and hidden away in the Magenta district of Milan. Recently renovated, the space still retains original details such as its stone arches and doors – complemented by more recent additions like its coffered ceilings.
From £ 376 via Airbnb

London-based designer Ilse Crawford oversaw the adaptive reuse of this former garage and laundry room into a contemporary ‘greenhouse’ space capped with rustic wooden beams. Milan’s Porta Venezia holiday home takes its name from the green accents that run through the whole place. His owner, Costanza cecchini, constantly refreshes the space, but guests can expect a rotating flow of artwork and a handful of plants.
From £ 86 per night via Airbnb

This 200 m² Milan apartment is located on the second floor of a Napoleonic-era palace. Giorla Trautmann Architects restored the 19th-century space in the heart of the city’s fashion district in 2015. Historic elements are mixed with modern design elements, such as the Nemo armchair by designer Favio Novembre and contrasted by an austere white color palette .
From 280 € per night via Urlaubsarchitektur

Another property of Constanza Cecchini, the Artists Loft is part of an 1800 building again in Porta Venezia. As with the Greenhouse Loft, the interiors of the holiday apartment contrast with the old architecture, including its exposed beams. “My goal is to create inspiring places where you can relax after an intense day in Milan,” explains Cecchini.
From £ 85 per night.

Discover the best apartments to rent in London, New York and Lisbon.