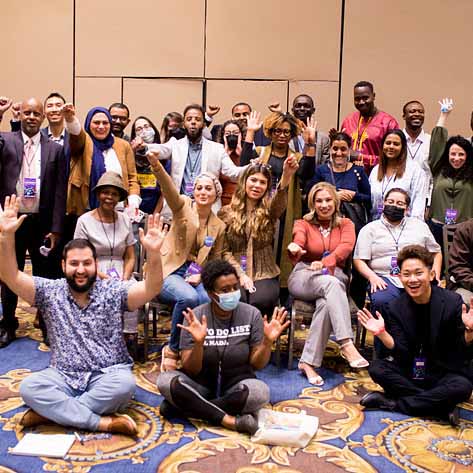 A movement for refugee leadership

Opportunity for All Leaders from across the country meet in October 2021. They each participated in a leadership development training program for refugees and led national and state advocacy and organization to welcome and protect those seeking freedom, security, and refuge in the United States. (Photo by Caroline Kroon)

As tens of thousands of Afghans have been forced to flee their countries in recent months, I have listened to Afghans in the United States, concerned both for their families in Afghanistan and for the new arrivals facing an uncertain future. . Their stories are often similar to mine, when, due to my husband’s work as an interpreter for the US military, I fled Iraq in 2010, in the middle of the night with my husband and daughter. ‘a year. Fortunately, there has been a surge of support for the resettlement of Afghan refugees, faith communities and veterans groups at companies like Airbnb and others. As the previous administration worked to dismantle the U.S. refugee resettlement system – admitting fewer than 12,000 refugees in 2020, up from nearly 85,000 in 2016 – local programs that provide medical care, support for trauma, housing and other services for the refugees who settle here need to be rebuilt. But we also have to look at the long term.

During my relocation to the United States and the years since, as a national campaign manager for We Are All America and as a refugee advocate, I have learned that civically engaging in communities where refugees will live is essential for their long-term success. When we provide refugees with opportunities to engage civically and realize their potential as leaders, it not only cultivates a sense of belonging and agency in their lives, but it contributes to positive changes that benefit us. all. For those who are committed to creating a more just and vibrant society, we must involve refugees and invest in their leadership and civic engagement.

Our new campaign at We Are All America, “Opportunity for All,” will deliver a one-year leadership development training program to a cohort of refugee leaders, including former Afghan refugees. We Are All America is one of a growing number of organizations that have developed similar programs to help refugees gain a sense of belonging, naturalize and vote, and become active participants and agents of change. in their communities. While leadership and civic participation programs vary widely in their scale and approaches, they all share essential elements: storytelling, civic engagement, racial justice, and advocacy. By engaging with the U.S. system of government, refugee leaders not only learn how they can influence local and national policymaking, but they become advocates for themselves and for one another.

Some leadership programs have been developed by resettlement agencies, like Church World Service, whose exemplary model works in collaboration with refugee-led networks, like the Refugee Congress. Church World Service has trained over 1,500 refugee leaders to organize their communities; tell their stories in a powerful way; develop campaign ideas; defend the refugee program; and engage in education, registration and voter mobilization for eligible former refugees who are now US citizens. As a result of Church World Service and other similar programs, refugees write their own editorials and present their own stories to the media, with the aim of helping to shape the public narrative about refugees.

Leaders like Mustafa Nuur, a former Somali refugee, credit his training with Church World Service as the catalyst for his role. as a community leader. “It was the start for me to discover the potential of what I can do,” says Mustafa. He began to share his story publicly, writing opinion pieces, and by organizing meetings with local representatives. Since training, he has become outspoken about issues affecting his community, including testifying at a congressional hearing about the importance of the refugee resettlement program. Mustafa not only founded Bridge—An organization that facilitates better understanding between refugee families and other residents of Lancaster, Pa. —But he became the first refugee to serve on the Lancaster Human Relations Board.

State advocacy organizations, such as the Tennessee Immigrant and Refugee Rights Coalition and the Florida Immigrant Coalition, have also developed similar leadership training programs that bring together refugee leaders with other immigrant communities. Other programs, such as Partnership for the Advancement of New Americans in Southern California, Haitian Women for Haitian Refugees in Brooklyn, and Unite Oregon, were founded and run by refugees (in all three cases by black refugees).

Unite Oregon was founded by State Senator Kayse Jama, who arrived in the United States in 1999 as a Somali refugee. “I have been fortunate to work with people who have supported my leadership and allowed me to realize my potential,” said Senator Jama. Early in his career, he worked with young African refugees as a case manager, and he founded Unite Oregon while a member of New Voices at the Western States Center. While there, he also initiated the Pan Immigrant Leadership and Organizing Project (PILOT), to address an urgent need: “[R]refugees did not have the opportunity to interact with each other, especially those who were civic minded, ”he said; “They felt lonely, culturally isolated … No one was providing training in the organization.” PILOT centers the knowledge and lived experiences of refugees in its leadership program, which annually trains 25-30 refugees representing more than 15 countries and sometimes a dozen different languages.

Senator Jama is living proof of what is possible when those affected have the opportunity – as well as the training and support – necessary to prepare them for success. And supporting the leadership of refugees must be part of philanthropy’s growing commitment to invest in the leadership of people with lived experience of the systems they strive to transform. Unbound Philanthropy, for example, was one of the first investors to help undocumented youth tell their own stories to the media, lawmakers and other stakeholders, as we believe that the lived experience of the systems of undocumented he immigration, asylum and refugee resettlement is essential to analyze how these systems need to change and to hold decision-makers accountable. We have seen undocumented youth gain broad and sustained public support, win (and advocate for) the Deferred Action for Childhood Arrivals (DACA) program, persuade local and national policymakers to support policies that advance the integration of immigrants, and right now campaigning to win the protection of millions of undocumented Americans through budget reconciliation.

These are remarkable achievements, and we are now seeing something similar emerge in the refugee field itself. Refugees organize and speak directly with policymakers, arguing that, as has been the case with other immigrants, supporting refugees benefits all Americans and makes this country stronger. For example, in 2019, Church World Service invited refugee leader Nga Vương-Sandoval to share her story with Representative Ken Buck, a ranking member of the House Judiciary Subcommittee on Immigration and Citizenship. Nga described her family’s experience when she fled Việt Nam when she was three years old, the welcome she received upon arriving in the United States, and the contribution of the refugees. Nga’s story had a major impact. The meeting convinced Rep. Buck to write a letter with 17 other Republicans to the Trump administration about accepting more refugees. And earlier this year, Nga was invited to meet with the first lady, Dr Jill Biden, where she took the opportunity to advocate for increased presidential resolve for refugees.

Today, Nga and other refugees and immigrants from Việt Nam spoke out to welcome Afghans to this country. “As a member of the Vietnamese diaspora who fled our homeland as refugees, we in turn should welcome others seeking safety,” Nga said.

Refugee civic engagement increasingly addresses issues beyond immigration, improving the quality of life for all members of the community. For example, in 2020, refugee leaders, trained by FLIC, advocated passage of Amendment 4, which restores the right to vote for those convicted of felony in Florida after their term ends.

Following the murder of George Floyd in the summer of 2020 and the global uprising around racial justice, many refugee-serving organizations deepened their commitment to racial justice and the fight against anti-black racism in their work. For example, the Tennessee Immigrant and Refugee Rights Coalition is creating a Black Immigrant and Refugee Caucus, to create a space for black immigrants and refugees to talk about the intersecting experiences of being black and being black. an immigrant or a refugee.

Church World Service has also sought to ensure that immigrants and refugees can help address the shortage of medical professionals during the COVID-19 pandemic. With the participation of refugee leaders involved in Church World Service’s community organizing efforts, relevant leaders have been able to mobilize and advocate for a number of state-level decrees and laws that increase access to healthcare. emergency licenses for internationally trained health professionals, which should improve access to medical services for those in need of care.

We’re also starting to see more refugee resettlement and advocacy organizations run by refugees. Some of these leaders work full time in the field, and others actively support refugees while simultaneously working in other sectors, in business, social entrepreneurship, as elected officials and as philanthropists. Refugee leadership comes from many sources, not only from their lived experience as refugees, but also from their multiple intersecting identities. In this way, refugees are diversifying what it means to be an advocate for justice for immigrants, as well as what it means to be black, or Muslim, or female, in America.