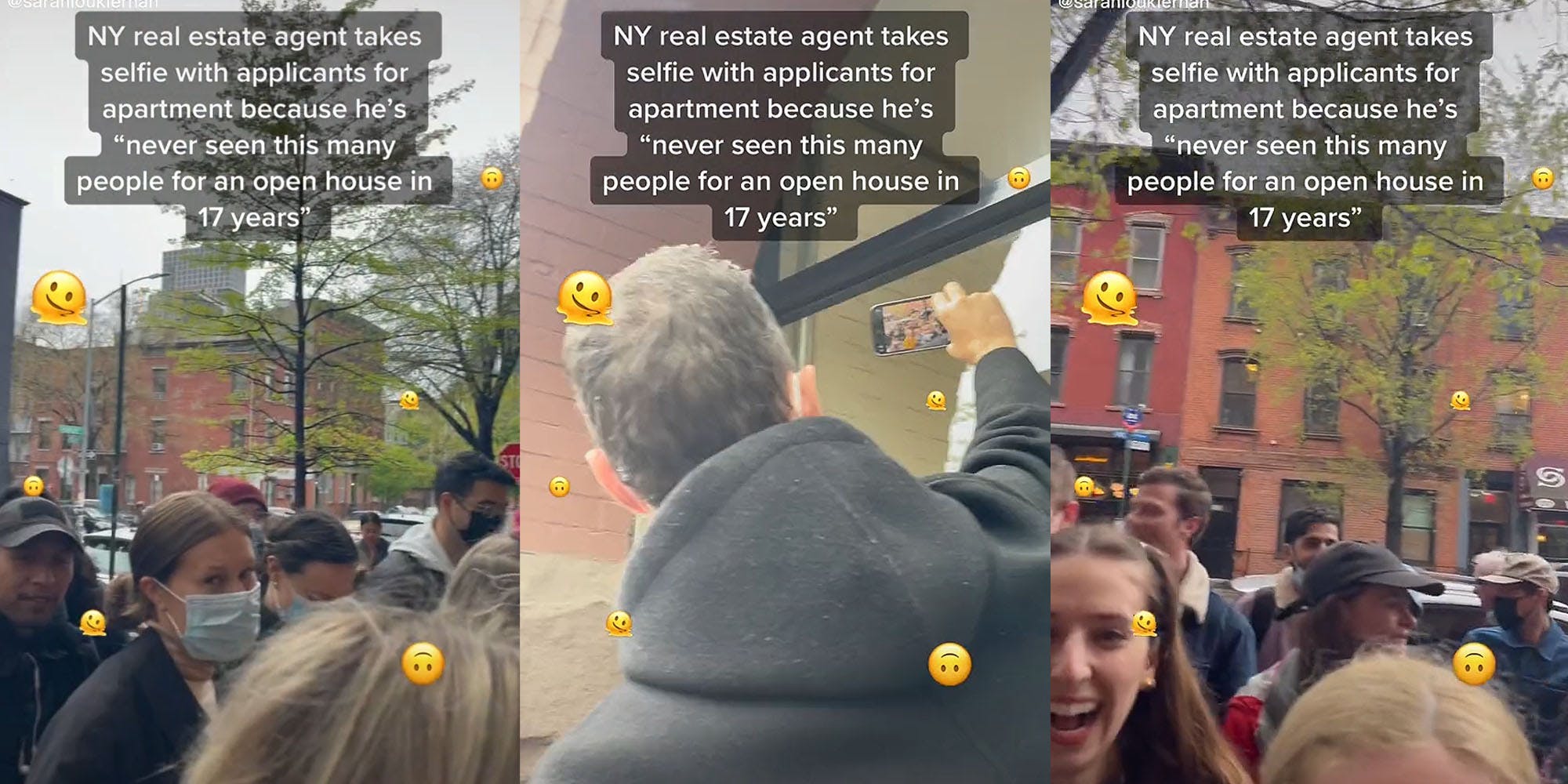 A debate has been sparked on TikTok after user Sarah (@sarahloukiernan) posted a video showing a real estate agent taking photos of the massive crowd viewing an apartment in New York.

“A New York real estate agent takes a selfie with apartment applicants because he’s never seen so many people for an open house in 17 years,” Sarah wrote in the text that covers the video.

The apartment is in the Greenpoint neighborhood of Brooklyn, an area that has an average rental price of over $3,000 for a studio. Rental prices in the area are skyrocketing, with average rents rising more than 40% last year, according to MNS Real Estate NYC.

The building itself is the Astral Building. Many claims have been made about the quality of the building and the super Thomas Tamborski, 57.

In 2021, green pointers reported that “law enforcement found three years of footage capturing [a tenant], as well as a former tenant, showering, changing and doing other personal activities” that could be attributed to Tamborski. He pleaded not guilty to 36 counts of unlawful surveillance.

Sarah notes this in a follow-up video.

While the people of New York decreases in the first year of the pandemic, there were more people move into the city by the end of 2021 than he moved there in 2019.

Many have claimed this is causing “rent compression”, where rental prices rise due to higher demand and an insufficient number of empty apartments to meet needs.

However, there are several problems with this idea.

First, some of the price increases can be attributed to the expiry of the COVID agreements. As many have moved out of town, some landlords have temporarily lowered prices to entice people to stay in their apartments. On average, owners have not lost money despite these deals, with a JPMorgan Chase report noting that “as income declined, landlords reduced their expenses by an amount greater than the decline in their rental income, resulting in an overall increase in cash balances”. In fact, “the median homeowner ended 2020 with a slight 3% decline in rental income compared to 2019.”

Although continuing to make substantial profits, the owners have now recognized the renewed interest in New York and have raised prices for their own benefit.

Returning to the TikTok, Sarah speculates in comments that the apartment was popular because it was both in a trendy area and “stabilized rent”, a term which applies to around 50% of New York apartments and means that the rent can only be increased by a certain percentage each year.

Regardless of the specifics, TikTokers had thoughts about tenants and this situation in general.

“This is……very sad and infuriating,” wrote one user.

“The Midwest and other rural areas need to have bigger cities with more career opportunities,” added another. “NYC and CA shouldn’t be the biggest options.”

Many other commentators have called potential tenants “gentrifiers.”

Above all, TikTokers were shocked at the prospect of having to compete with so many other people just to get housing.

As one user wrote, “I never leave my mom’s house…it’s infuriating.”

We reached out to Sarah via a TikTok comment.

Braden Bjella is a cultural writer. His work can be found in Mixmag, Electronic Beats, Schön! magazines, and more.