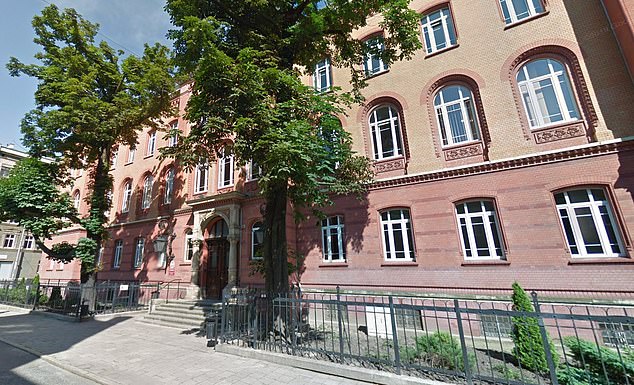 A Pole is sentenced to 25 years in prison for murdering and eating pieces of an unidentified man in 2002, whose body has never been found – according to the words of one “mentally ill alcoholic witness”

Ap and Ross Ibbetson and Ed Wight for Mailonline

The Pole was sentenced to 25 years in prison for murder and cannibalism in 2002, although the victim was never identified and his body was never found.

The court ruled that the defendant, named Robert M., had acted along with four other people to kidnap an unidentified man after a dispute at a bar in the village of Lasko.

At the urging of Robert M., one of the men killed the imprisoned man, and then all five sealed the pact of silence, cannibalizing the body.

A court in Szczecin, in north-western Poland, decided to authenticate the testimony of co-accused Robert M., Rafał O. after the police overheard his phones and apartment to hear him tell his friends and neighbors about the crime.

A court in Szczecin (pictured), in north-west Poland, decided to authenticate the testimony of co-accused Robert M. Rafał O. after the police overheard his phones and apartment to hear him tell his friends and neighbors about the crime.

Four men were arrested in 2017, but the murder suspect, Zbigniew B., died of natural causes a few months before the arrests.

According to Rafał O., it was Zbigniew B. who cut the man’s throat at the request of Robert M.

Then the victim’s body was taken to the lake and parts of his body were cut off.

Robert then lit a fire, boiled the victim’s body, and ordered the others to eat it as part of a “pact” to ensure his silence.

The crime remained secret until 2017, when the police received anonymous information that Zbigniew had confessed to committing the crime before his death.

The police received a secret letter signed by the late Zbigniew B., in which he described murder and cannibalism.

Although there was no evidence, the prosecution found the letter authentic and opened an investigation.

Then the police intercepted the telephones of people mentioned in the letter in which they overheard Rafał O.’s conversation about the murder.

However, at the trial, lawyers argued that he was mentally ill and an alcoholic, and his testimony could not be trusted.

Judge Tomasz Banaś ruled, however, that despite “some inaccuracies” as to the events from 20 years ago, his testimony was credible.

The judge also stated that the accused had been “overheard by the police” and decided to convict Robert M.

The remaining three men, Sylwester B., Rafał O. and Janusz S. were acquitted due to the statute of limitations.

Only chief mocker Robert M. was convicted on Monday.

Before entering the court, Robert M. was optimistic, telling journalists as he entered: “I am waiting for this case to be dismissed, it should never have been allowed to.”

However, he was surprised to discover that the judges had accepted the account of one of his co-defendants.

His lawyers said they would appeal the sentence, arguing that Robert M. had been convicted under the word “mentally ill alcoholic.”