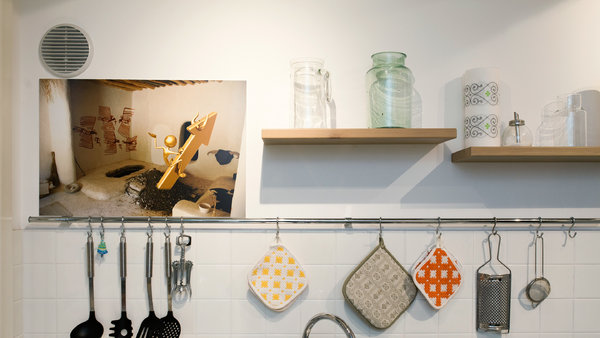 A large part of the films selected by Rem Koolhaas this year Architecture Biennale in Venice, which opens this weekend, explores the 20th century. But the Airbnb paviliona three-day satellite pop-up exhibition opening tonight and curated by Fabrizio Ballabio, Alessandro Bava, Luis Ortega Govela and Octave Perrault, a group of students and recent graduates from the Architectural Association School of Architecture in London, investigate on a 21st century phenomenon: the way people lend their apartments in the new “sharing economy”.

Most of the Biennale’s unofficial pavilions are housed in palaces or other large structures around Venice, but the Airbnb pavilion occupies a modest vacation rental, which will also serve as the Biennale’s accommodation for its organizers. “We saw the space for the first time yesterday when we arrived in Venice, carrying all the works in our hand luggage,” Bava explained via email. “Actually, I’m writing from the jacuzzi.” While many architects, including Florian Beigel, Raphaël Zuber and Pascal Flammer, provided renderings of proposed interventions in the space, the organizers ultimately chose not to touch the rental. Instead, those shots are displayed alongside works by more than a dozen artists, including Stewart Uoo, whose video, “Confessions,” plays on a loop on a laptop left on the bed; Charles Broskoski, who replaced framed photos with CGI orchid images; and Jon Rafman, whose animation of a house endlessly wallpapered with a painting by Juan Gris echoes the playful collision of art, design and architecture that takes place throughout the apartment. .

“It started as a pragmatic thing,” Bava noted. “We realized that we could rent an apartment in Venice using Airbnb to do an exhibition during the Biennale, and that Airbnb was actually the most interesting thing for us to explore. Architects always talk about the internet in an abstract way Airbnb is an incredible paradigm that connects real spaces and online spaces and shows that architecture is not dead.
location of the apartment has been kept semi-secret because it’s a private residence, but canalside (and virtual) chatter has caused talk of this once-under-the-radar project.

The Airbnb pavilion opens tonight and is visible to the public on June 5 and 6, from 12 p.m. to 6 p.m., airbnbpavilion.com.

NYC fights Airbnb, but roommate got green light in Amsterdam