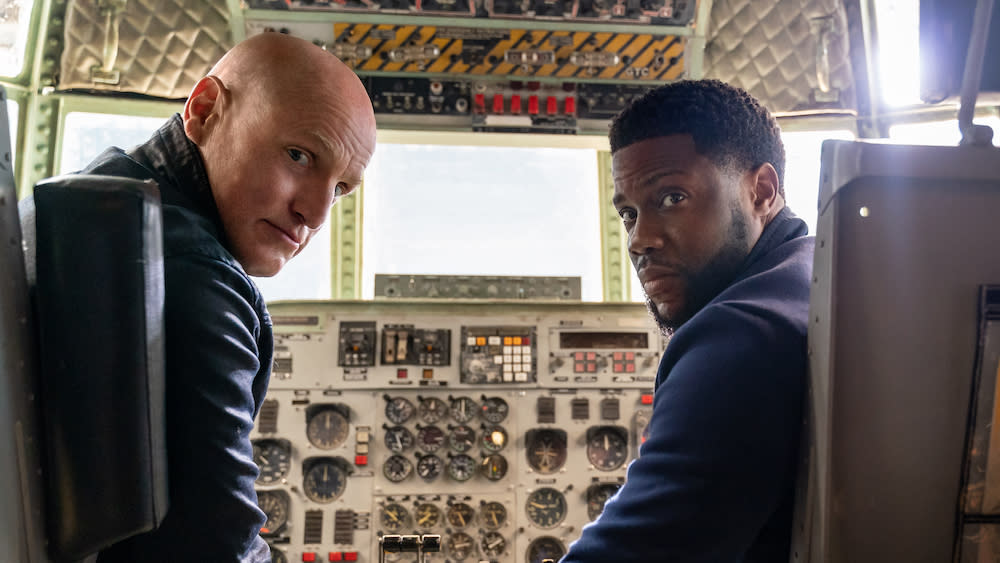 In Patrick Hughes‘ “The man from Toronto“, a throwback buddy action-comedy that makes up for its banal sense of humor with a pair of engaging tracks, all about the loveable Teddy Jackson (Kevin Hart) screams shit right off the bat.

A soon-to-be-jobless salesman at a modest Virginia gym, Teddy is introduced via a series of hysterically cringe-worthy online videos in which he doggedly tries to launch the next big workout sensation. But his elastic resistance belt TeddyBand — one of his painfully insane inventions – does nothing but slap him. The dubious pull-up bar he designed? He immediately collapses. In fact, this budding internet sensation is such a famous failure in his pursuits that colleagues at the law firm of his holy wife Lori (Jasmine Matthews) coined the saying “Teddy’ed it” after him, a phrase used every time someone makes a mistake at work. .

What do you get when someone so incompetent is mistaken for a notoriously competent assassin – namely, straight face Woody Harrelson‘s self-titled “MFT” – and unwittingly teams up with him on a risky mission? Naturally, a big fun mess that involves globetrotting acts, snarling hitmen, lots of bitter bickering, and the FBI. To their credit, screenwriters Robbie Fox and Chris Bremner whip up an appealing dish from this recognizable recipe, even as “The Hitman’s Bodyguard” director Hughes gradually overloads their simple plot towards the finale.

Overall, though, the team still delivers something compulsively watchable, with playful nods to countless opposites – attracting, good cop/bad cop buddy movies, a la “48 Hours,” Trading Places” and “Lethal Weapon”. In that regard, “The Man From Toronto” – originally slated for theaters by Sony before the pandemic and now released by Netflix after lengthy Covid-related delays – should find a healthy audience in the streaming world thanks to its familiar nostalgic aura. and always- charismatic stars.

So how exactly does confusion arise? It all starts with an AirBnB address made unreadable by Teddy’s printer. (He’s not particularly good at maintaining household electronics.) It seems like a contrived way to start things, but you accept it anyway when Teddy surprises his profusely tolerant wife Lori with the romantic arrangements before his anniversary. And in due course, he inevitably shows up at a very bad address where the infamous MFT must torture top secret information about an international criminal, using his brutally medieval methods that involve a massive number of blades. Making a deal with the FBI after the mix-up, Teddy agrees to continue impersonating the MFT to help them bring down a global network of dangerous con artists.

The film spares us the sight of the real Torontonian spinning his subjects with his sharp tools, though it’s clear he takes great pride in the process. Through a playful introduction, we get the impression that this poetry-loving foodie would rather use his knife skills for culinary pursuits than pursue well-paying jobs orchestrated by his master, a Charlie figure played by an enigmatic Ellen Barkins.

It’s all too predictable from now on once the MFT, who never seem as tough as their reputation suggests, put the pieces together and exploit a clueless Teddy as their professional wingman. But we slip into the laid-back predictability of it all so easily, “The Man From Toronto” survives its flaws. Another plus is the well-defined bromance chemistry between a delightfully motorized Hart and a quietly sarcastic Harrelson, as their distinctly dissimilar personas course-correct for each other through escapades both air and land.

Working from a script far better than the rambling “The Hitman’s Bodyguard” and the stifling “The Expendables 3”, Hughes vividly choreographs plenty of high-octane fight and chase sequences around them, cohesively edited by Craig Alpert and captured by “Mission: Impossible – The nimble lens of Fallout cinematographer Rob Hardy. While the resulting package is far less sleek than an “MI” movie, it still exudes an old-school cinematic vibe – assuming you can skip a dazzling green screen or two, that is.

That’s why it’s a disappointment when “The Man From Toronto” goes to an unnecessarily loud and bloated finale, a common misstep that pollutes many blockbusters these days. Indeed, you wish the time spent introducing various other “Men” – from Tacoma, Tokyo, Moscow, etc. – in the final act was dedicated to digging deeper into the film’s two main female characters, instead of haphazardly cooking up potential spin-off sequels. One such woman is the inexplicably serene Lori, whose extreme patience we never buy with Teddy. The other is MFT’s eventual love interest, Anne, played by seductive Kaley Cuoco from “The Flight Attendant,” with proven chops to give any male spy a run for his money. Unfortunately, these two women feel a little too masculine. Still, there’s enough verve and charm here to keep us glued to the screen for a dose of light action on its feet, however forgettable it may be in the long run.