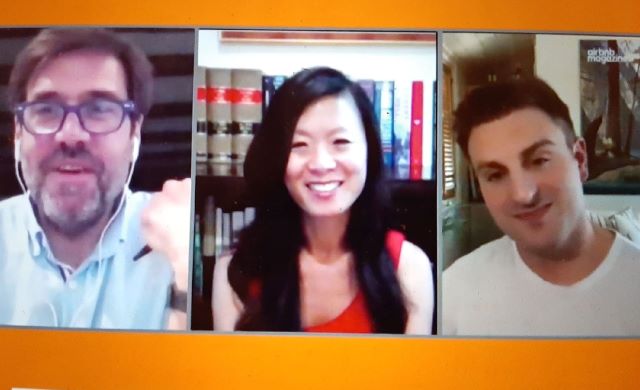 United States: Airbnb CEO Brian Chesky revealed the company was recently approached to go public through a merger with a blank check acquisition firm during a Reuters Newsmaker webinar on Wednesday.

Mergers with so-called ad hoc acquisition companies [SPACs] are considered a relatively new but increasingly popular way to get listed on the stock exchange. SPACs are shell companies that use proceeds from IPOs and debt to acquire another company, and have gained traction as a fast track to the stock market in about two years for companies worried about the duration of the IPO process.

Chesky said, “We were approached by people who presented us with opportunities. We’re looking at everything, so I probably shouldn’t speculate too much on that.

In a conversation with Reuters Breakingviews columnist Gina Chon and Reuters global editor and columnist Rob Cox, Chesky declined to comment further on the IPO process as the market was still in the midst of its recovery, although he admitted that his co-founders had yet to make a “final determination on whether to raise additional capital”. He also cited Slack and Spotify as two companies that had set precedents for going public with a direct listing, but there were none in the travel space for Airbnb to replicate.

The CEO revealed that Airbnb was ready to file for an IPO around March 31, but that decision had to be pushed back as the company had to ‘fight fire’ after losing 80% of the company. business within six weeks. or so in the early stages of the pandemic. As the company sought to weather the crisis, Airbnb raised $2 billion in debt capital, with investments from Silver Lake and Sixth Street Partners.

During the hour-long webinar, Chesky, Chon and Cox discussed a number of topics related to Airbnb’s handling of the fallout from the coronavirus outbreak, including its support for guests and hosts and the “very difficult” to lay off 25% of the company’s global workforce.

How has Airbnb been affected by the pandemic and what did it promise hosts and guests?

According to Chesky, Airbnb’s European business was one of the biggest to “collapse”, and the day the World Health Organization [WHO] officially declared Covid-19 a pandemic, the company got more than $1 billion in cancellations from customers who needed money to pay rent and mortgages.

“When business drops 80%, it’s like slamming the brakes on a car at 100 mph,” he said. “It was a bigger time for travel than 9/11 and the crash of 2008 combined, and more disruptive to American travel companies like Marriott than even World War II.”

Moving forward, the co-founders sat down to draft specific “principle” rather than business decisions, to “do what it takes to serve stakeholders and help customers who are unable to travel but who feel compelled to do so because of refunds”.

With “hemorrhagic” money from Airbnb, he made the decision to refocus his business plan back to his original roots of connection and bonding, which Chesky called a “big wake-up call” for him.

However, as business continued to decline, he acknowledged that Airbnb would not be able to afford to keep everyone in the business with the uncertainty hanging over when travel would resume and what. they would like to come out of the pandemic. In May, it announced a major layoff of 1,900 employees, or about 25% of its global workforce.

How do you plan to continue connecting people?

Moving from year-to-year to day-to-day planning, Chesky said his immediate priorities after the outbreak are to preserve Airbnb’s guests, hosts and reputation, take them on trips and protect shareholder value. In doing so, he admitted that while it was impossible to make everyone happy with every decision, it was important to make “a lot” of decisions that could be aggregated to balance everyone out.

It’s likely Chesky was referring to Airbnb’s U-turn introducing a cancellation policy that would force refunds on guests, but left hosts angry at the late notice they were notified with and the threat of being left behind. next to.

Following that, Airbnb’s co-founders said they’ve taken $250 million of their own money to send to hosts as part of a new “Superhost Fund,” where hosts can apply for grants of up to up to $5,000 to compensate for their losses due to cancellations. Employees have also come forward to pledge $1 million of their travel credit to give to their hosts, and hosts and investors have added additional funds to bring the figure to $17 million.

Chesky said Airbnb would continue to attract and connect guests with hosts as long as it provided a unique product they couldn’t get anywhere else.

Could you [Chesky] saved more jobs while raising money?

Chesky said, “For a company rooted in belonging, that was a very difficult thing to deal with.”

After business fell 80% in the space of six weeks, Chesky said Airbnb was facing a situation between a “recession and a depression”, where the best scenario would be to make 50% of the revenue generated l ‘last year. .

The company has cut costs almost at every level, including stopping transportation [flights] for the foreseeable future, suspending all travel content and reducing investment in Hotels, its mid-tier Airbnb Plus product, and its Luxury tier. Everything that was not part of its basic offer has been removed.

In order to get through this crisis, Chesky revealed that the company made layoffs in the spirit of cutting “not too deep but deep enough to make us think we wouldn’t have to do another one.” The laid-off employees received support such as personal phone calls, letters, supplemental health insurance and access to a directory of former talent.

When will the trip return and what will have changed?

Despite the challenges posed by the aftermath of the pandemic, Chesky said he was “incredibly optimistic about the future” given that bookings had far exceeded his expectations, in that they “almost defied logic”. The increase was such that one million nights were booked in a single day on July 8, according to the CEO.

Whether it’s pent-up demand from people just wanting to get out of their homes or rather spurts of a sustained resumption of travel, travelers are showing a growing desire to travel, especially to destinations by car if they are cautious about walking back into an airplane.

How would that change if you became a public company?

While Chesky conceded that Airbnb “could have done it sooner,” he believed the company wanted Airbnb to exist and continue to connect guests with hosts around the world. However, to succeed in this latest crisis, the company should be “more than a platform” and be responsible for all the activities that take place there.