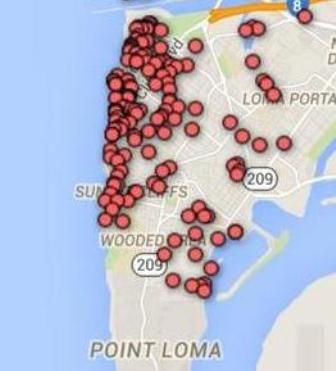 Airbnb said Monday, June 28, that its crackdown on unauthorized parties in the San Diego area has blocked thousands of potentially risky bookings.

The vacation rental booking company said that since its campaign began last year, 6,000 people have been blocked or redirected in potentially risky booking attempts. That’s compared to 15,000 in Los Angeles and 4,500 in Las Vegas, according to Ben Breit, head of trust and security communications for Airbnb.

“Probably a lot of them are great people who were trying to book for legitimate reasons but haven’t earned that trust on Airbnb yet,” Breit explained.

Breit said the attempt to prevent more unauthorized parties from happening has been working so far.

“We have gradually stepped up our measures to try to stop the unauthorized parts to the best of our ability,” Breit said. “Everyone deserves the right to have peace and quiet in their neighborhood. “

The new numbers were announced ahead of the July 4 bank holiday weekend, when bookings and gatherings are expected for many San Diego tourism hot spots. Airbnb added that in preparation for the vacation, it prohibits guests who do not have a history of positive reviews from booking entire homes overnight across the country.

For the rest of this article, go here

This nation was ready for COVID. Now he’s looking at the next threat | app