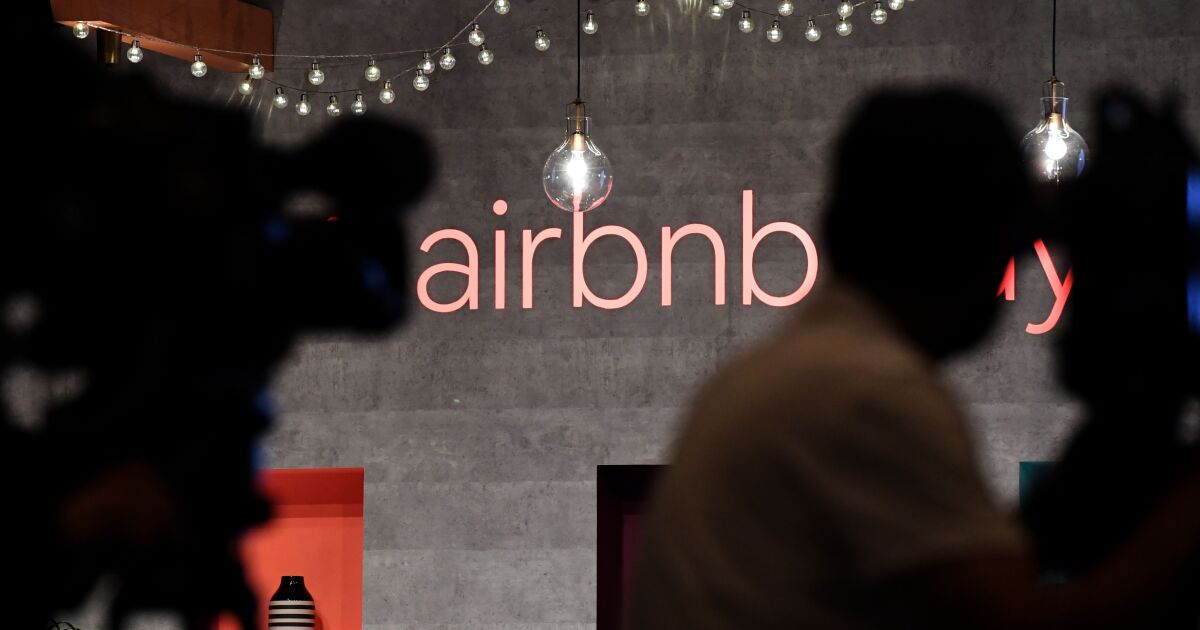 Airbnb expects bookings to drop due to increase in COVID cases

Shares of Airbnb Inc. fell 4.5% in extended trading after the company forecast quarterly bookings to decline from pre-pandemic levels, citing the spread of the Delta variant of the coronavirus.

The house rental company said the number of nights and experiences booked in the third quarter will be lower than the total over the same period in 2019. The disclosure on Thursday amplified investor fears that the latest outbreak is weighing heavily on the travel industry.

Booking Holdings Inc. and Expedia Group Inc. issued similar warnings about the effect of the Delta variant in their financial reports this month.

All three reported otherwise outstanding quarters. Airbnb has exceeded previous expectations for second quarter bookings and gave a surprisingly positive revenue outlook for the current period, indicating that the expected decline in total bookings will not hamper sales.

The San Francisco-based company reported a gross bookings value of $ 13.4 billion in the second quarter, a 37% increase from pre-2019 pandemic levels. Analysts had predicted $ 11.2 billion dollars on average, according to data compiled by Bloomberg.

While Airbnb has benefited from a boom in domestic travel in the United States linked to rising vaccination rates and easing of restrictions, international sales remain stifled and the Delta variant has raised further doubts for the company. ‘to come up.

“We predict that the impact of Covid-19 and the introduction and spread of new variants of the virus, including the delta variant, will continue to affect overall travel behavior,” the company said. However, he added a positive outlook for the current period, predicting the “highest quarterly income on record”.

Managing Director Brian Chesky said the pandemic had forced the home-sharing company to become “much more disciplined and much more efficient.” COVID-19 will leave “indelible marks” on Airbnb, Chesky said on a conference call. “When we started Airbnb, stays longer than a month weren’t a big part of the business,” he said. Long-term stays of 28 days or more were now the fastest growing category by length of trip. It’s “not even traveling, it’s living,” Chesky said.

The travel industry has been ravaged by the pandemic, which caused most tourism hot spots around the world to shut down last year. Airbnb has benefited from the remote working movement, in which city dwellers have abandoned their apartments for extended stays in rental accommodation near seaside towns and mountain villages. The house rental company saw bookings drop 80% last March, but they rebounded quickly by the summer.

Short-term rentals were the fastest growing part of the online travel industry even before COVID-19. Over the past 18 months, they have largely kept the industry afloat. Almost 30 cents of every dollar spent in the hospitality industry today goes towards short-term rentals, according to an analysis of data compiled by researchers AirDNA and STR Inc.

The increase in demand has resulted in heightened rivalry between the world’s largest online travel agencies. Booking and Expedia are aggressively wooing homeowners in the United States, especially those who register with Airbnb.

“There have been recent concerns about whether Airbnb is reaching a maturity point and whether they can continue the supply growth they have seen,” Dan Wasiolek, analyst at Morningstar Investment Service, said before the publication of results.

Airbnb reported that the number of active listings increased in the second quarter. “We are seeing the greatest increases in supply in areas where customer demand is greatest,” the company said in the statement. Earlier this year, Airbnb launched a digital campaign focused on recruiting new hosts, and the company said traffic to its host landing page has more than doubled in countries where the campaign is underway.

Despite the doubts raised by Delta, Airbnb saw an increase of nearly 200% in nights and experiences booked, which includes all stays and tourism activities sold on the platform. The company recorded 83.1 million total bookings for the quarter, beating the average analyst estimate of 77.5 million.

Airbnb reported adjusted earnings before interest, taxes and other expenses of $ 217 million, well above analysts’ forecast of $ 50.4 million. The company reported a loss of 11 cents per share. Analysts were expecting a wider loss of 41 cents.