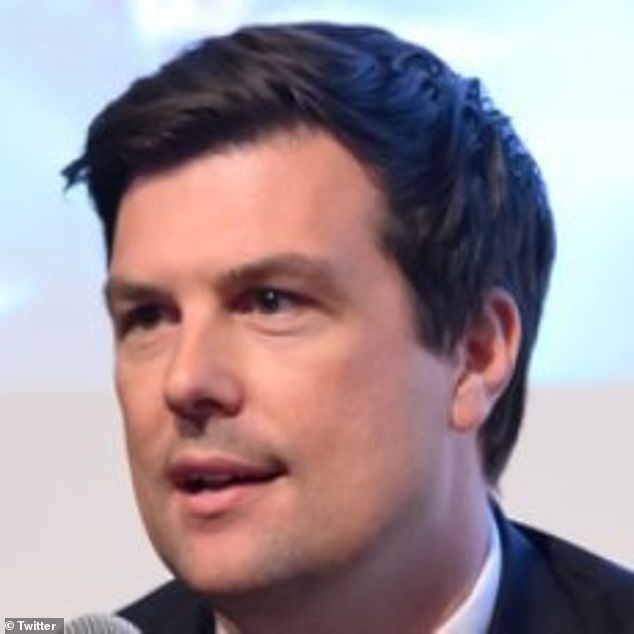 An Airbnb host in Glasgow was banned from taking reservations at the COP26 climate change conference after trying to squeeze an additional £ 1,449 from a US delegate.

Tan Copsey, of Brooklyn, New York, reported the owner to the business after receiving a message trying to justify the additional charges.

The owner, who has not been identified, admitted he did not realize the reservation was for the climate conference and feared he would “run out of money”.

In the wake of the report, Airbnb has now banned the owner from accepting guests during COP26, which is due to start on October 31.

Mr Copsey, senior director of climate communications company Climate Nexus, tweeted a photo of his correspondence with the host in which they cited a “400%” increase in the average room price in the region.

Tan Copsey, senior director of Climate Nexus, tweeted that the owner was trying to add an additional $ 2,000 to the price of his reservation. 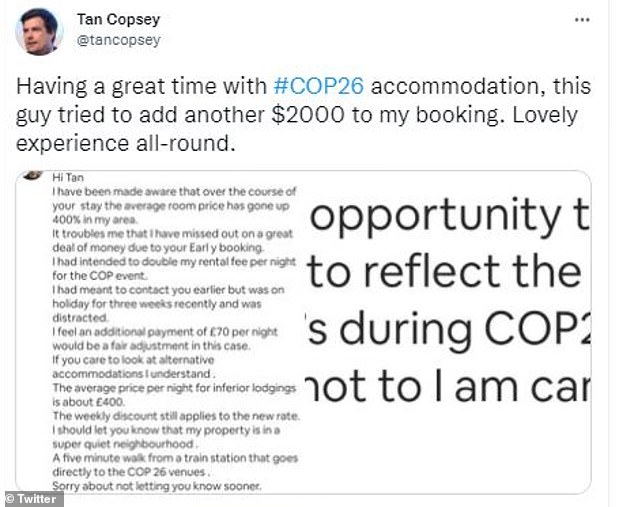 His tweet read, “Having a great time with the COP26 accommodation, this guy tried to add an extra $ 2,000 to my reservation. Great experience all around.”

“It bothers me that I ran out of a lot of money because of your early booking.

“I had planned to contact you earlier, but I had been on vacation for three weeks and was distracted.

“I think an extra $ 70 per night would be a fair adjustment in this case. If you care about looking at alternative housing, I understand.

“The average price per night for lower quality accommodation is around £ 400. The weekly discount still applies to the new rate.

“I have to let you know that my property is in a very quiet area. Five minutes walk from a train station that goes directly to the COP26 sites.

After Mr Copsey informed the owner that he would no longer hold the reservation, the owner replied, “I have given you the option of agreeing to pay an additional charge to reflect the market price for short term rentals. during COP26 in Glasgow. 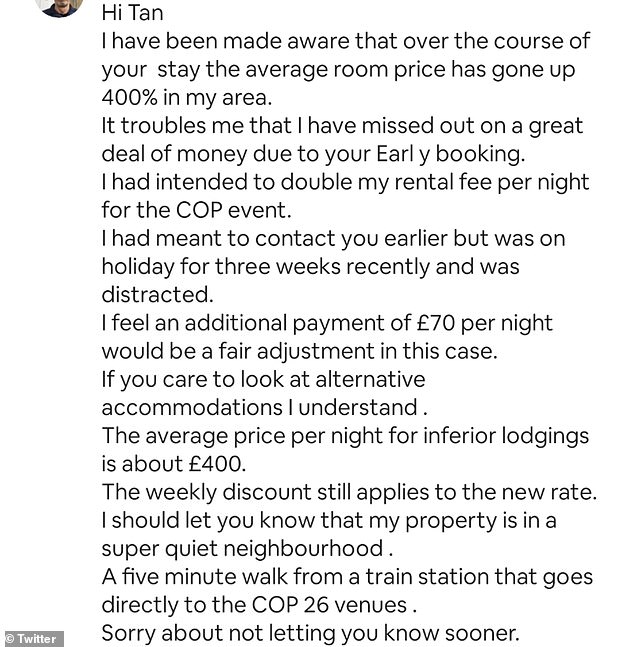 The message Mr Copsey received from the owner of Glasgow, citing that he was “going to run out of money”

“As you have chosen not to do so, I am canceling your reservation. “

In a statement, Airbnb said it penalized the host by prohibiting them from taking other reservations during the conference.

A spokesperson added: “We have no tolerance for this behavior and have taken action against the host and prevented them from accepting further bookings during this time.

“The client was fully reimbursed and we offered support to help them find alternative accommodation.

“Airbnb is donating all of its service charges for stays in Glasgow during COP26 to Zero Waste Scotland. “

About 30,000 people, including leaders from 120 countries, are expected to attend the SEC climate change summit in Glasgow between October 31 and November 12.

However, concerns have already been raised about the cost and availability of housing in and around the city.

The Scottish government has urged people to open their doors to visitors as part of the COP26 Homestay Network – a program set up to encourage families to provide a place to stay for free or at low cost.

Hundreds of households have reportedly joined the initiative.

A government spokesperson said: “By offering free or low-cost accommodation, hosts can help ensure that those who are unable to meet the costs themselves, especially those in the Global South, can attend the summit and make their voices heard. “

Yesterday, however, MPs were told of a “housing crisis” with around 3,000 people planning to attend and still unable to find accommodation.

It follows that 20 properties on the Airbnb site and 30 on Booking.com were advertised at over £ 20,000 for the two-week event.

A two-bedroom apartment in the Kelvingrove area of ​​Glasgow was reportedly listed at £ 8,583 per night.

A COP26 official said: “As hosts it is of utmost importance to the UK there are plenty of accommodation options at reasonable prices.

Airbnb host in Glasgow bans bookings at COP26 after raising delegate fee by $ 2,000