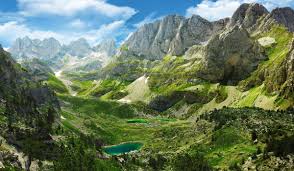 The Albanian government is betting that a new national park will not only preserve a pristine, flowing river, but will also boost tourism in the country.

It’s both a victory and a concern for NGOs, which have campaigned to block the construction of dams but now fear that projects aimed at attracting tourists could undermine fragile ecosystems.

At a ceremony on Monday, Environment and Tourism Minister Mirela Kumbaro Furxhi signed a memorandum of understanding with US outdoor apparel company Patagonia, pledging to build a national park that will protect the 300 kilometer course of the Vjosa River and its tributaries.

If it goes ahead, the park would be the first of its kind in Europe.

The concept of a wild river national park that not only protects the main waterway, but also its tributaries, is unique, said Ulrich Eichelmann, CEO of the NGO Riverwatch.

At the Vjosa, we are witnessing a new model of protection for other rivers in Europe, threatened by dam projects and other forms of pressure.

At Monday’s event, Rama presented the project as part of a government target to bring 30% of the country’s territory under protected status by 2030; this is in line with the objectives of the EU, a bloc that Albania hopes to join.

But he warned that protecting the river should not come at the expense of economic development in the valley.

Unlike the southern coast of Albania, the Vjosa River Valley did not suffer from uncontrolled urban development after the fall of the communist dictatorship in 1991, meaning the area remains relatively unspoilt.

About two hours south of Tirana, where the crystal clear waters of the river flow into the Adriatic Sea, is a nesting ground for endangered birds and a home for rare plant species.

It is an ecosystem that scientists have been eager to study. Franziska Walther, a researcher at Humboldt University in Berlin, said the wilderness of the Vjosa means it is one of the few places where she can conduct her research into natural river systems.

The surprising thing about the Vjosa River is that always when I’m here the river looks a little different, she said on a recent afternoon spent kayaking on the river for collect samples to study water chemistry.

Because it’s fluid…it’s always in a different form.

Protecting this unique ecosystem means granting the river “the highest level of protection”, which rules out the construction of dams and requires the regulation of other economic activities like gravel extraction, Sovinc said.

Many locals welcome the idea of ​​a national park.

Sitting in the shade outside a cafe on the main road, Qemal Malaj, the mayor of the small town of Brataj, said he joined a group of a dozen other mayors in calling on the government to reinforce river protections and block the planned construction of four dams along the Shushicë River, a tributary of the Vjosa.

For NGOs that have spent years at loggerheads with the government, Monday’s pledge is not the end of the road.

Artan Zeqaj, a 50-year-old businessman who runs a restaurant in the town of Qesarat, protested against hydroelectric projects which he said would have flooded his village and the farmland on the banks.

Sitting in his restaurant, he said he was skeptical that the national park would see the light of day.

Government plans to boost tourism are also creating new tensions, including over the construction of an international airport near the Narta Lagoon protected area on the Adriatic Sea, which is home to flamingos.

The airport is an unavoidable compromise, according to Albanian Minister of Environment and Tourism Mirela Kumbaro Furxhi.

Nika predicted that EcoAlbania would be very likely to sit on the plaintiffs’ bench again in court in response to these plans.

[The lagoon] is one of the best parts of the national park in terms of conservation, so the concession will certainly be contested.

Every time Johnson has a problem, he calls Zelenskiy – and the bill quickly mounts | Simon Jenkins