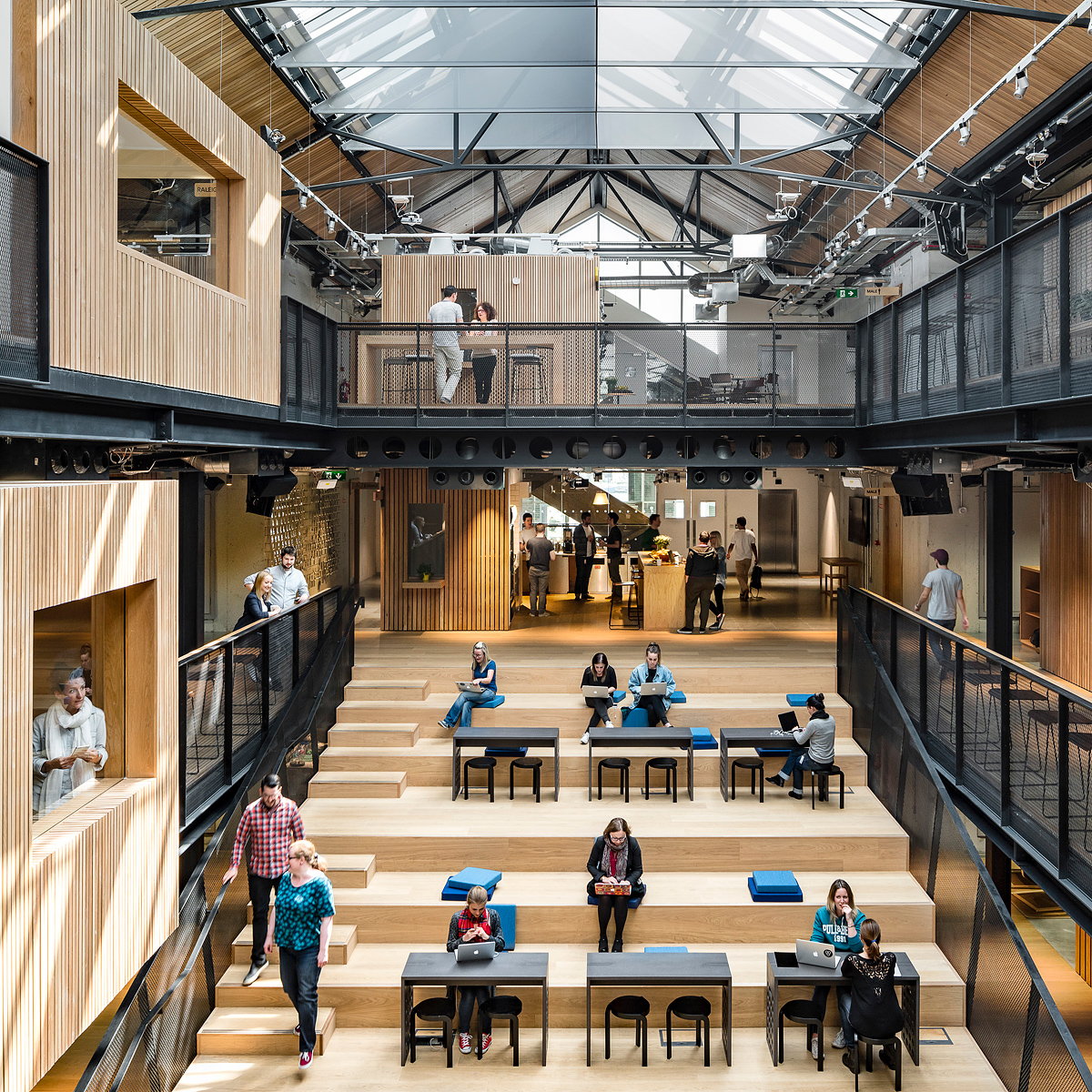 Airbnb’s internal environments team has partnered with Dublin-based architects Heneghan Peng to design a space that cultivates collaboration, interaction and a sense of community. The focal point of the office is a spectacular cascading staircase that serves multiple purposes, from a large conference space and community event space for up to 400 people, to a ‘lounge style working environment. “.

The Warehouse incorporates a distinctive “neighborhood” concept that reflects Airbnb’s “Belong Anywhere” ethos with a choice of work configurations, but allows teams to come together in a dedicated base to encourage collaboration. The Warehouse is also Airbnb’s first urban campus model that will become more prevalent in the brand’s offices in the future.

Employee feedback on the Airbnb Portland office design highlighted that employee visibility is a challenge for management teams, in part because of the varied spaces in the office that are not all in the same line of sight. In response to this, Airbnb’s Environments team incorporated a “neighborhood” concept that still reflected Airbnb’s “Belong Anywhere” ethos with a choice of workspaces and layouts, but allowed teams to meet in a dedicated base to encourage collaboration.

The warehouse is divided into primary and secondary workspaces. The main workspaces consist of 29 quarters with identical components, accommodating up to 14 people each. Each quarter includes a large table, personal storage space, one or two seated seats, and a seating area.

Individual desks have been replaced with a large central communal table that facilitates sharing in a way that individual desks cannot. The quarters also include custom-made furniture from local manufacturers, including tables by Burke Joinery.

Secondary workspaces include the “Agora”, the kitchen area and the meeting rooms. The central staircase is the focal point of the office. Entitled “Agora”, it connects the first floor to the basement, unifying the different floors. The staircase serves multiple purposes, from a large conference space and community event space for up to 400 people to a ‘lounge style’ working environment.

The interior design of each meeting room is inspired by existing Airbnb listings around the world to allow employees to travel throughout their day. Design influences come from Portugal, Greece, Romania, Japan, Sweden, Morocco and France.

As part of Airbnb’s overall office design strategy, the Environments team engaged with local employees in an Employee Design Experience (EDX) program to help add the finishing touches to the rooms. meeting. This included a bespoke replica of a dining table from a Romanian listing and authentic decor from a listing in Montpellier, France. The EDX program allowed employees to reinterpret the design elements of Airbnb listings in meeting rooms as well as exemplify elements of Dublin’s local identity.

The variety of work setups in neighborhoods and secondary workspaces encourages healthy ergonomic movement, increased socialization and engagement. The Environments team, led by Aaron Taylor Harvey and Rachael Yu, worked in conjunction with Heneghan Peng to implement the concept and components of the neighborhood into the space.

Airbnb’s ethics support local entrepreneurship and foster relationships with local businesses and businesses. This is evidenced in Airbnb’s choice to collaborate for the second time with Dublin-based architects heneghan peng, who partnered with Airbnb in 2014 to design Dublin’s first office in the Watermarque building.

“The Warehouse has been a rare opportunity for our team to start from scratch and evolve the ‘Belong Anywhere’ workplace philosophy that makes Airbnb unique,” ​​said Rebecca Ruggles of the Environments team. “The combination of neighborhoods with the visual and physical connection through the atrium strikes the right balance between intimacy and socialization.

“The local Airbnb employees were very proud to have put the finishing touches on the design of the meeting rooms. Together, we thought about ways to really transport people when they walk through the door. For example, if you are having a stressful day, walking in Mykonos and sitting under the pergola with bougainvillea hanging around you, can really feel like a trip to the island and help calm your mind. “

The Warehouse, the new 4000m² office at Hanover Quay in Dublin, will house more than 400 employees, covering a range of teams from customer service to legal services. The former The Watermarque Building office will continue to operate.