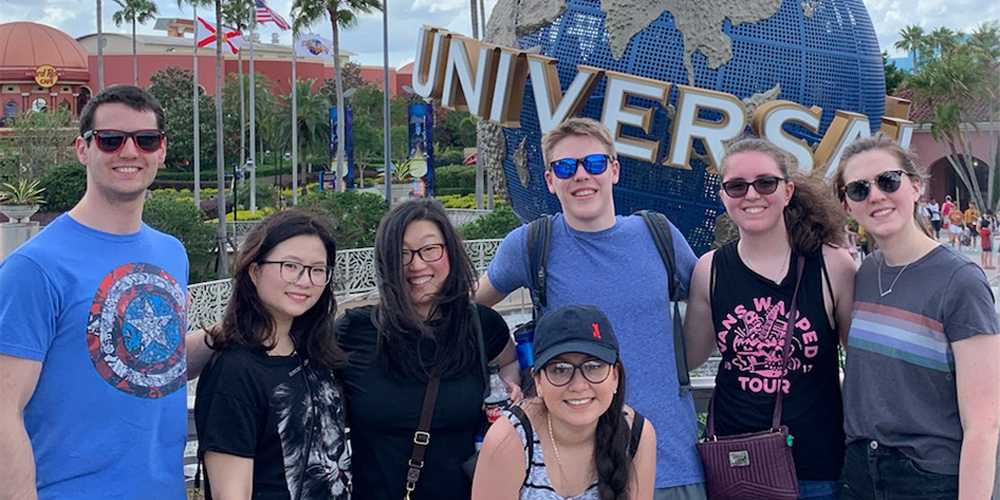 All alone in a crowd

I thought I had anticipated everything. I had booked a nice Airbnb within walking distance of the conference center. I had a list of phone numbers and flight information for all my students. I had spent hours helping my students prepare their research posters. I had gone through the list of presentations and created a schedule of interesting lectures for my students to choose from. And through a collaborative effort with conference staff, sign language interpreters have been confirmed for all of these sessions. We were ready.

When I go to national meetings with my students, I usually give them an afternoon of free time so they can explore the area, visit a museum, or visit any local place of their choosing. This time we were going to Orlando, so the choices were endless (and expensive). But I was determined to make one thing happen: we were going to a theme park.

It would be all or nothing – we all went there or none of us went there. I created a poll for my students to vote on which park they would most like to visit. The results were unanimous: Universal Studios. I worked with a friend and travel agent to book the tickets so we could get a group rate. I prepaid for the tickets and told each student that I would top up their payment so they could all afford it: “Whatever you can afford, let me know.”

Despite a few hiccups, we arrived at Universal around 2:30 p.m., and were determined to stay until the park closed. It was really hot, quite a change from the 30 degrees we had just left in upstate New York. There were eight of us, so sometimes it was a challenge to keep track of everyone, but for the most part we stayed together. We took rides, saw shows, ate junk food and explored the magical Harry Potter Village. By the end of the night, my feet and my brain were also exhausted.

All in all, the trip to the park seemed like a resounding success. But it really wasn’t, and here’s why.

Before most rides, two of my students had to have their cochlear implants removed. The movement, the water, the chaos – for all of these reasons, they didn’t want to risk damaging their $35,000 implants. I’m sure I would have made the same wise decision. However, when these students removed their implants, they were thrown into a world of silence – isolated from the group and alone in the crowded park.

It was not until the next day that one of these students bravely explained what had happened. How a seemingly joyful adventure turned into a frightening ordeal. Even a trip to the bathroom, separated from the rest of the group, was traumatic. I was heartbroken. How could I let this happen? What should I have done differently?

The truth is that I could not have foreseen this. I don’t live in a world that’s not made for me, so I guess it’ll be fine. And that was for most of us but not for these two students. I realized I was asking the wrong question. Instead, I needed to ask, “What can I do to make sure this doesn’t happen again?”

I met with colleagues and one of the students, and we thought of ways to prevent this ordeal from happening again. But the task was difficult. There were so many scenarios, so many things that could go wrong. The best I could do was sit and think – going over and over again what had happened.

As I thought, I realized that this situation was not unique to my two deaf/hard of hearing students. Social activities intended to promote feelings of inclusion, improve group dynamics, and create a sense of camaraderie and belonging are often well-intentioned, but sometimes misguided. I had been hosting social gatherings with my research group since I started at Rochester Institute of Technology in 2009. Most were very busy and very fun, but there was one pattern that I hadn’t wanted to acknowledge until now – At the time, most students who missed these events were people from non-traditional backgrounds and/or underrepresented groups.

Do not mistake yourself. I don’t think we should cancel all group social events. I think they have a lot of merit. They can help build teams, strengthen relationships, and improve a student’s sense of belonging. But because they can also do the opposite, it is important to think carefully about our events and ask yourself a few questions before planning them:

Do we have a lot to consider? Yes, especially for large groups, like my research group of about 20 students. Are we going to be able to accommodate every student all the time? Maybe not, but isn’t it worth trying? Isn’t it good to push students out of their comfort zone? Sure, but there’s a difference between stepping out of a comfort zone and stepping into an impossible zone. Do not force students to do things that make them physically or emotionally very uncomfortable.

So what did I learn from all of this? I learned that even though I consider myself an inclusive person, I still have a lot to learn. I’ve learned that good intentions don’t make up for bad planning. And I learned that in certain situations people can feel very lonely, even in a crowd of friendly faces.