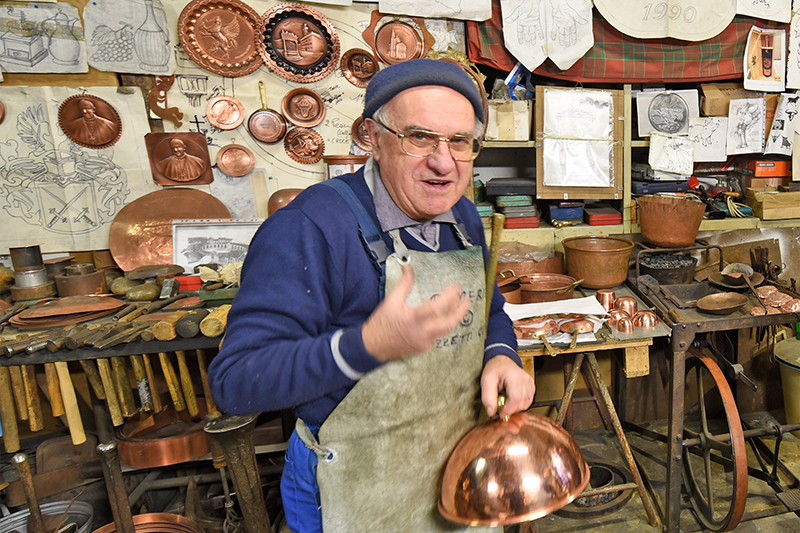 While we wait for travel to Europe to become fully open to Americans, here’s a reminder of the fun that awaits us in Europe.

When you have traveled in Europe, you see how traditional and local businesses are making way for cookie-cutter chains and synthetic compliance. In historic city centers, as rents rise, longtime residents, families and artisans are being evicted. Small hotels, unique boutiques and individual artisans just don’t have the size to compete with the big ones.

In Florence, the end of rent controls immediately drove up costs, pushing artisans and stores intended for locals out of business – to be replaced by upscale boutiques and trendy restaurants. The same thing happened in Barcelona‘s Gothic Trimester. While landlords evicted long term tenants to earn more money in the short term Airbnb rentals, mom-and-pop stores have lost their traditional clientele and have closed their doors. In Istanbul, the city wishes to relocate the emblematic gold and silver workshops of the Grand Bazaar at a location outside the city center, while the “Made in Taiwan” gift shops are able to pay higher rents and take their place, changing the character of the market.

Craftsmen lament that the next generation, drawn by the energy of big cities and lured by the opportunities of big business, is not here to carry on traditions. Artists who make guitars by hand in Madrid, the family winegrowers of Burgundy, the fishermen who sell shrimp on the Oslo Harbourfront… they’re all in danger. What will become of these rich facets of local culture if the younger generation retires? Of course, I cannot fault the children of craftsmen for embarking on the modern mad rush; I’m not an old school piano technician like my dad. But it’s worth considering what the future will look like when economic scale and efficiency trump artisanal values.

It’s a real joy when I come across real artisans who are committed to doing things the traditional way, by hand – and communities who understand the importance of keeping them in business. I urge travelers to seek out and support craft experiences before it’s too late.

In Rothenburg, Germany, I visited with Pierre Leyrer, an engraver who proudly showed me his etchings. He makes his prints using the copper plate technique, just like Albrecht Last made 500 years ago. Peter prints the etchings in black and white, paints them in watercolors and sells them in his shop. Peter is aging and will be retiring soon. He told me that without someone to replace him, his 3,000 copper plates would probably end up in a museum. One of his prints hangs in my office.

In the Tuscan hill town of Montepulciano, my friend Caesar is a proud coppersmith with a mind as strong as the oak root upon which his grandfather’s anvil rests. For Cesare, every day is a spectacle, as constant streams of travelers pass by to see him at work, fashioning special adornments for the city’s cathedral and hammering out fine kitchen utensils.

Near Orvieto, Federico Badia is a young shoemaker passionate about preserving the art of traditional shoemaking. After completing his apprenticeship in a leather goods store in Rome, he created his own workshop, where he patiently makes beautiful leather shoes for an admiring clientele. Federico says “Made in Italy” doesn’t apply to mass-produced factory shoes – it’s a label that rightfully belongs only to beautiful, handcrafted products by artisans like himself.

Back in Istanbul’s Grand Bazaar, Dikran is a silversmith who uses hand tools to create unique and finely crafted pieces. For a decade he worked as an unpaid apprentice, studying under a master until he became one himself. In the old days, a volunteer apprentice had to work hard to convince a master to accept it. Today, it is difficult to bring young people into a field where training takes years and incomes are limited.

While guiding a group of tourists in eastern Turkey, I once met a craftsman famous for his wood carving. We gathered around his table to watch him work, appreciating the pride he took in his art. Suddenly he stopped, raised his chisel high in the sky and said, “A man and his chisel, the biggest factory on Earth!”

I don’t have the answers on how to maintain Europe’s centuries-old traditions, but I am inspired every time I meet the artisans who lovingly carry precious and threatened crafts into the future. And it always feels right to buy a piece of their work.

This article was adapted from Rick’s new book, For the love of Europe.