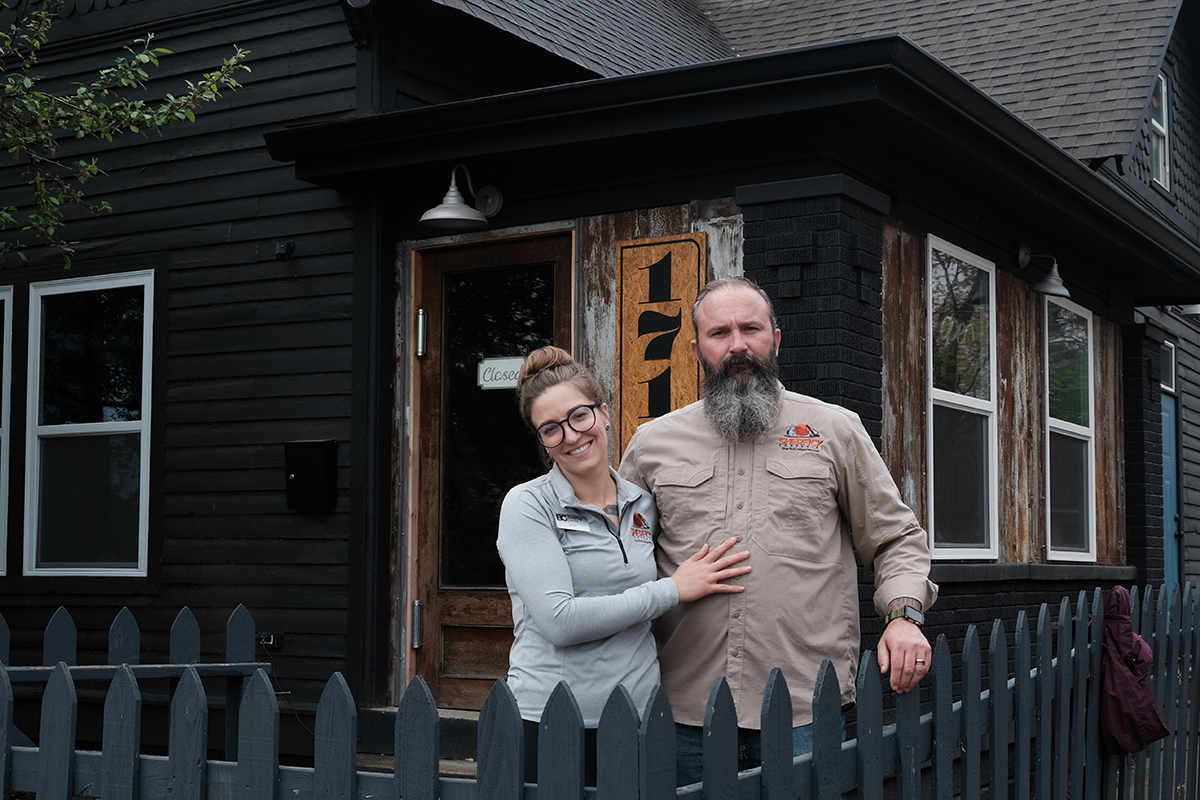 Gabby and Mike Sherfick of Noblesville have invested over $ 2 million in the development of Bates-Hendricks since 2016. (IBJ Photo / Eric Learned)

The Bates-Hendricks neighborhood, just south of the city center, has been one of the city’s emerging residential hotspots in recent years, and business developers are taking note.

In a three-block stretch of East Street, a key thoroughfare in the neighborhood, six different properties are being rehabilitated for a mix of uses, including restaurants, lounges, business offices and Airbnb rentals. Two other businesses, a hair salon and a coworking space, have also opened along East Street since the start of the year.

The projects promise to transform a stretch where, until recently, vacant and neglected buildings dominated. They will also add to the commercial offer in a district that does not yet have many businesses, even if the district is dotted with rehabilitated houses, some priced at $ 400,000 and more.

As an example: there are only four restaurants in the entire neighborhood, with a footprint stretching from Madison Avenue in the west, Interstate 65 in the east, Interstate 70 in the north, and almost to Raymond Street to the south.

“It’s amazing the amount of turnaround that’s happened with the homes in the neighborhood,” said Kris Bashenow, who, along with her husband, Greg, is redeveloping two East Street properties. “There is just a huge demand for [development] the.”

The Bashenows, who live in the Butler-Tarkington neighborhood north of West 38th Street and Michigan Road, already knew Bates-Hendricks through other properties they own there.

So, of course, Indianapolis real estate developer Two Chicks and a Hammer Inc., which is building a new headquarters on once vacant land at 1628 S. East St.

Mina Starsiak, owner of Two Chicks, who founded the company with her mother, Karen Laine, said the company hopes to be in the new building by October. Its offices are currently located at the Stutz Business Center, 1060 N. Capitol Ave.

The growth of the district has also attracted new investors.

The story continues below the map.

Local developer Keith Wiggins, of Indianapolis-based property management company Reid Properties LLC, said he got interested in the neighborhood after some of his residential tenants moved out of his properties to buy homes in Bates-Hendricks.

“We’re pretty optimistic that this area is growing and should be a nice little area,” Wiggins said.

Last summer he and his wife, Myrian, purchased the old Moore Market building at 1710 S. East St. from Southeast Neighborhood Development. Wiggins said he is working to secure permits for the renovations, which will turn the vacant 7,400-square-foot old building into mixed-use space. Once construction begins, work is expected to take six to nine months, Wiggins said.

Current plans call for two retail spaces on the ground floor, with two high-end lofts upstairs. Wiggins said a grocery store-style restaurant would be a good choice for one of the spaces, although he has yet to start recruiting tenants.

Other newcomers to the neighborhood are real estate investors Roger Lee and Steve Flanagan, who bought 1540 S. East St. in January 2020 for $ 105,000. The commercial property is located on the northwest corner of East and Lincoln Streets, a commercial corner in the heart of Bates-Hendricks.

“It was too appealing to pass up,” said Lee, who has completed a number of residential projects with Flanagan elsewhere in Indianapolis. This is the couple’s first business venture.

The two then added Mike and Gabby Sherfick of Noblesville as co-owners. Now Lee, Flanagans, and the Sherficks all own the building equally. A chiropractor and salon are expected to open in the space shortly, and the building’s third tenant space is being marketed for a restaurant.

Through their real estate and development company, Sherfick Cos., The Sherficks have been active in Bates-Hendricks since 2016. Mike is a developer and Gabby is a real estate agent. The two bought, rehabilitated and sold several houses in the neighborhood. In addition to the 1540 S. East St. project, they are also working on another commercial project one block south at 1632/1634 S. East St. This project will house a hair salon called Bang (A Salon) and a pizza place that has yet to be named, said Mike Sherfick.

In total, the Sherficks have invested just over $ 2 million in development projects around Bates-Hendricks and currently own several properties there.

“We have a pretty big investment here, when you add it all up,” said Mike Sherfick.

Lee said he and Flanagan wanted to work with the Sherficks because of their vision of creating a pedestrian community in Bates-Hendricks. “I really respect what the Sherficks did.”

Residents of Bates-Hendricks say they see a few reasons why business development has gained traction in the neighborhood.

On the one hand, the neighborhood association has been courting commercial development for several years, keeping an eye on vacant commercial properties, acting as an intermediary between owners and real estate developers and defending the types of development that, according to them, would benefit the region.

Now these efforts are starting to gain momentum.

“We sometimes fly by the seat of our pants, which makes it work,” said Bates-Hendricks Neighborhood Association president Matt Nunley.

As an example, he cites 1718, a bar and restaurant that opened in late 2019 at 1718 S. East St. Even during the pandemic, Mott said, neighbors frequented the restaurant and helped keep it going. afloat, a strong signal for the other candidates. business owners.

Mott is the executive director of Dathouse, a faith-based organization that owns Lincoln Center, a commercial space on the northeast corner of East and Lincoln. The building is home to Lincoln Lane Coffee Co., which opened in 2016, as well as a small public laundromat and community gathering space. A coworking space, The Loft, opened on the second floor in March.

One of the concerns, Mott said, is how to maintain the mixed-income character of Bates-Hendricks by not valuing long-time residents as the neighborhood continues to grow.

“It’s a difficult balancing act,” he said. “I can’t say that I think we are doing a great job, but we know it.”

And the neighborhood is still working to attract a grocery store and a daycare, two types of development that residents have always identified as priorities.

The challenge with a particular grocery store, Mott said, is that grocers generally want larger spaces than those available in Bates-Hendricks. “It’s just a riddle that hasn’t been solved yet.”

Another challenge is how to improve walking along East Street, a busy thoroughfare where residents say speeding is rife. The neighborhood’s vision is to eliminate on-street parking along the east side of East Street to create a pedestrian and bicycle path.

The neighborhood association has had this project in mind for years, but the effort is still in its early stages and has so far raised only half of the $ 9,000 needed to complete the design work. initials.

In the meantime, commercial developers say they see great potential for Bates-Hendricks to continue to evolve over the next decade.

“Bates-Hendricks is one of the last neighborhoods [in Indianapolis] where you have good traction and you have good inventory to work with, ”Lee said. “We will continue to invest in this pocket. “•