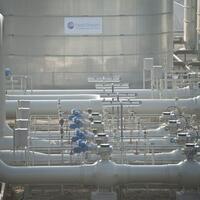 Germany said on July 8 that it hoped to convince Canada to deliver a turbine needed to service the Nord Stream 1 gas pipeline, with Russia waiting for the machine to arrive before increasing supplies.

Germany is seeking to bolster dwindling energy supplies, but Ukraine has accused Berlin of caving in to Russian ‘blackmail’ after Moscow blamed the cut in supplies on the need for repairs, not market conditions during the war in Ukraine.

The turbine is currently undergoing maintenance at a Canadian site owned by German industrial giant Siemens.
Last month, Russian energy giant Gazprom blamed the problem on a cut in supplies to Germany through the controversial pipeline as Berlin faces a severe energy crisis.

Berlin says it has been in regular contact with Ottawa over the past few weeks to ensure the turbine’s quick return to Europe without Canada falling foul of Ukraine-related sanctions against Russia.

German government spokesman Steffen Hebestreit said on Friday that Berlin, already preoccupied with a broader pipeline maintenance session due to start on Monday and lasting around 10 days, had received “positive signals” from Canada.

The German finance ministry has indicated that “if it makes decision-making easier for Canadians in a legal sense,” Germany could offer Ottawa to send the machinery to Berlin rather than Gazprom and Russia.

While not accepting maintenance issues as the reason for Russia’s cut in supplies, Germany says returning the turbine would deprive Moscow of an excuse to keep supplies well below normal levels.

While Germany’s finance ministry said it was investigating whether returning the device to Russia would constitute a sanctions violation by Canada, Ukraine urged Canadians not to return the turbine.

“We ask Canada not to return the Gazprom turbine to Germany, but to Ukraine,” Sergiy Makogon, general manager of Ukrainian gas transmission system OGTSU wrote on Facebook.

Makogon said Ukraine’s own pipelines were capable of transporting enough gas to Germany to compensate for dwindling Russian supplies.

“Ukraine can transport the entire Nord Stream volume,” Makogon said, referring to the Yamal gas pipeline that runs through Poland but on which Russia has imposed its own sanctions.

Makogon, who has previously said that a “significant” proportion of Nord Stream 1’s gas transit volume should be redirected to Ukraine, insisted that “we must not submit to Kremlin blackmail”.

The Kremlin said on Friday it would speed up Nord Stream deliveries once the turbine is in place following maintenance.