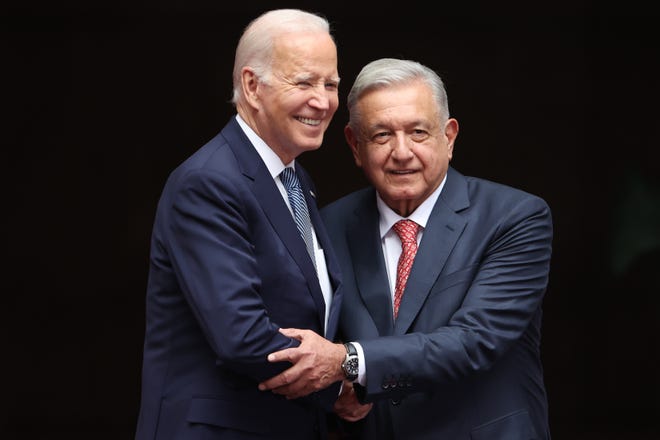 Biden in Mexico missed an immigration trend: US citizens are moving there

MEXICO CITY — For more than a decade, Marcos Del Rosario Santiago has lived in La Roma, at the time a booming neighborhood in western Mexico City.

But Del Rosario has seen a change in his neighborhood. More and more Airbnbs are popping up after those who live in apartments, some who once had to have three or four roommates, could no longer afford to live there. At his local panadería, where he often orders a coffee and a pan dulce, he only heard people ordering in Spanish, even though they weren’t Mexican. Now he says he sees and hears more foreigners ordering in English.

“Some of them don’t even try to speak Spanish,” he said.

While many Mexicans are increasingly concerned about gentrification caused by the influx of Americans who have moved to “el DF” as the capital was called, Del Rosario thinks having new neighbors is not necessarily a bad thing.

“Diversity”. The singular word Del Rosario used to describe the impact of this new phenomenon. What about rising rent and food prices? Well, that’s just the price to pay for progress, he said.

“We are working together to meet this challenge in a way that respects the laws of our country and protects the human rights of migrants facing desperate circumstances,” Biden said during Tuesday’s press conference at the National Palace in Mexico City.

While immigration rhetoric in the United States has focused on sending migrants back to Mexico, another burgeoning phenomenon remains largely ignored: Americans migrating to Mexico.

Over the past decade, Mexico has become the top country Americans have moved to — a trend that has intensified during the pandemic. There are now a record number of American Americans becoming temporary residents in Mexico starting in 2022.

According to a Bloomberg analysisthere has been an 85% increase between 2019 and 2022 in the number of Americans becoming temporary residents in Mexico.

Americans also choose to move to Mexico because of the ease of the process compared to other countries.

The majority of expats who flock south work for US-based companies, earn US dollars and can take advantage of a favorable exchange rate and don’t need to go through the tedious visa application process. they plan to stay there 180 days or less.

Some neighborhoods in Mexico City, such as Roma, La Condesa, and Coyoacán, are beginning to mirror gentrified areas in the United States like East Austin, Texas, Brooklyn, and Miami’s Wynwood neighborhood.

At a cafe called Ojo de Agua — a Mexico City chain now opening branches in the United States, such as Miami’s Brickell area — located in the La Condesa neighborhood, the top 40 American pop songs blared over the loudspeakers. speakers.

A group of English speaking people went to the cafe, after walking past. They took their places at a long table that could hold their group of ten. Immediately, a worker, who spoke to them in English, approached to greet the customers. She explained the concept of the restaurant, saying that they have to go to the cashier to order.

But as the group of American nationals settled into the cafe, a Spanish-speaking couple seated at a table on the sidewalk had just received their order of an agua de fresa and a bowl of smoothie, taking advantage of the windy weather in about 60 degrees.

A mariachi band stopped by to serenade the couple. At the same time, Demi Lovato’s “Cool for the Summer” echoed throughout the cafe, rivaling the mariachi melody.

The migration of US citizens to Mexico is not new, said Ariel G. Ruiz Soto, a policy analyst at the Migration Policy Institute, a think tank focused on immigration policy.

What is new is the demographics of Americans moving to Mexico.

“More US citizens, generally considered digital nomads, have been able to work from Mexico, be paid in US dollars by their US-based businesses, and experience better living conditions,” Ruiz Soto said. The number of remote American workers is only a few thousand compared to the more than millions who live in the city.

Ruiz Soto added that officials in Mexico and Mexico City are undeterred by the rise of “digital nomads,” noting that the country relies heavily on tourism.

In fact, Mexico City Mayor Claudia Sheinbaum last October partnered with Airbnb to increase the number of remote workers coming to the city. At the time, Sheinbaum dismissed concerns about rising rent prices, saying those who came were moving to areas where rents were already high.

But part of the locals’ reaction to the rise of remote workers in the United States is based on social perception and perceived fears about the burgeoning group of citizens settling in the country, Ruiz Soto said.

In the past, when American tourists came to the city or American investments arrived, it was on a temporary basis, he said. Now Americans are staying and local restaurants and businesses cater to these American nationals. Businesses now have menus in English. Some companies are even now showing television commercials in English.

“Even though the number is still relatively small, in the city of millions Mexicans tend to perceive this as a significant shift in the social fabric they have become accustomed to,” Ruiz Soto said.

And even some Americans who have lived in Mexico City for over a decade are seeing the change in culture.

Dan DeFossey, a New Yorker who has lived in Mexico City for 13 years, said when he first moved to the city he was forced to fit in because there were so few Americans there. were living.

“We had to be immersed in Mexican culture,” DeFossey said of the small group of Americans he knew when he first moved to Mexico City. “Walking down the street, if you spoke English people would turn around and look at you. It was a different experience. We were forced to learn Spanish and immerse ourselves in the culture.

He said that because of crowdsourcing, Americans all end up in the same neighborhood, like Condesa or Roma.

DeFossey noted that while there is a certain weariness among Americans who come to live in Mexico City – some of his friends worry about feeling like “a stranger in their own town” – there is still a sense of pride that he sees among his friends who people want to move to Mexico.

“People were so excited to hear that their city was something an American would want to come to,” he said. “And I think there’s still quite a bit.”

While many residents and local officials are becoming accustomed to the new group of Americans, Mexico’s most senior leader has often taken a more nationalist stance during his government in Mexico. López Obrador has repeatedly taken a beating in the United States and hasn’t been afraid to call new immigrants, even Americans, “outsiders.”

But that message doesn’t resonate well with the Mexican public, said Duncan Wood, senior adviser to the Mexico Institute at the Wilson Center, a public policy think tank.

“We’ve seen that over the past year with the president trying to take on the United States a few times and having to back down because opinion polls showed Mexicans had makes a very favorable view of the United States,” Bois said.

He noted that many Mexicans now have ties to the United States or have visited the country more.

“I actually think there’s a lot less distrust of the United States today than there was 20 years ago,” Wood said.

While many Mexicans are accepting of new Americans putting down roots in Mexico City, some still worry about rising costs for Mexicans who can no longer live in the neighborhoods they once called home.

Betsabé Basáñez, who has owned a residence in the La Condesa neighborhood for nearly 20 years, said rents are now “very high” in his neighborhood and shops and cafes have started to raise prices.

“Most of the people who were there, like the tenants, had to leave,” Basañez, 43, said. “They were fleeing to the surrounding neighborhoods because they just couldn’t afford it.”

“It’s not as cheap as it was three years ago,” she added.