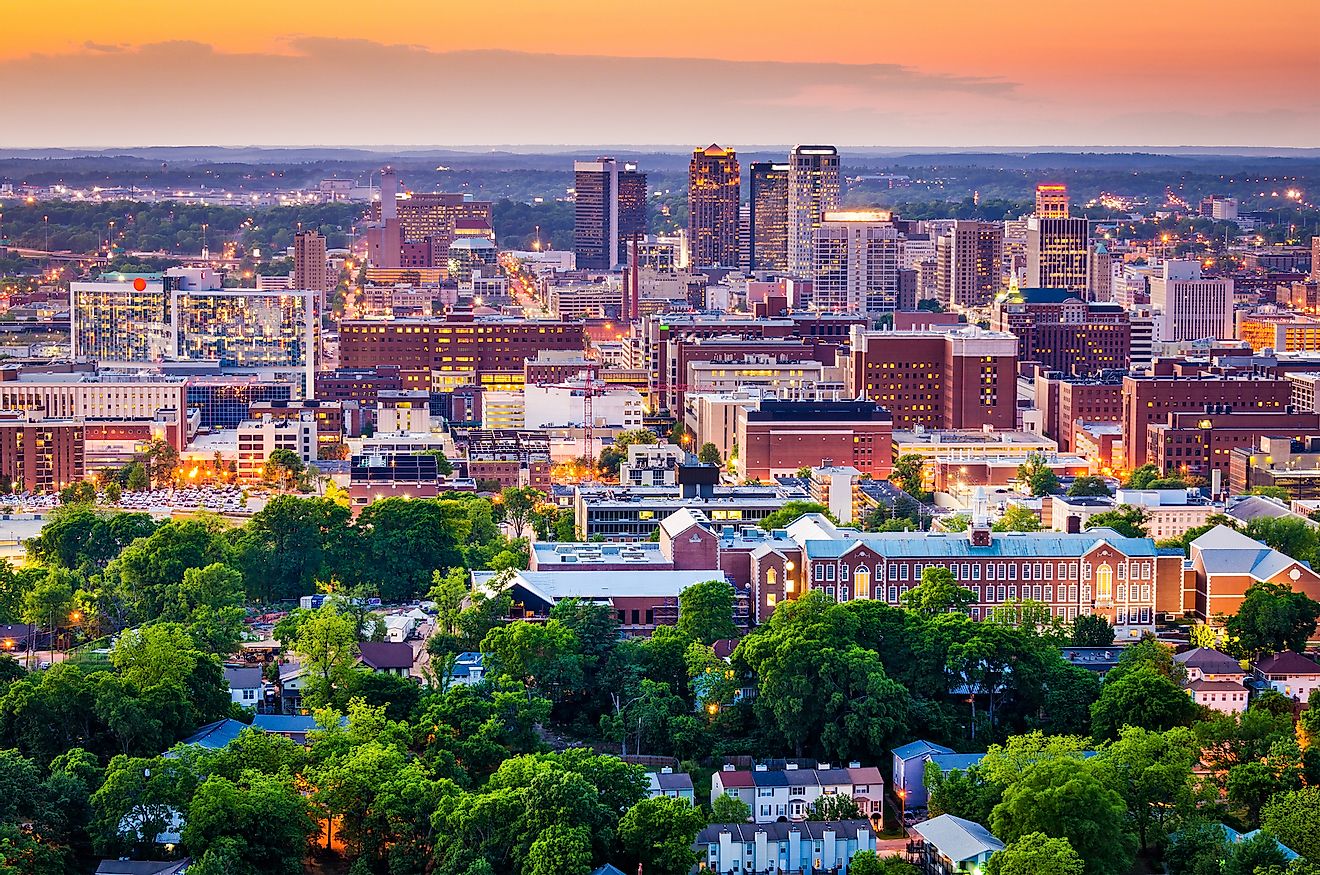 The city of Birmingham was founded 151 years ago in 1870. Emerging from a dark history of violence, epidemics and racial tensions, Birmingham has indeed come a long way. It has changed its image to become the “Magic City”, which champions civil rights and racial equality and celebrates the arts, sports and science. Birmingham has moved away from reliance on natural resources by creating a vibrant community committed to growth by advancing corporate culture and nurturing the discourse of social justice.

Geography and Climate of Birmingham

Birmingham is located in the north-central US state of Alabama, 300 miles from the Gulf of Mexico. The north and northeast regions of the city are nestled in the foothills of the Appalachians. It is located in the Jones Valley, between a scale of hills and the red mountain range. Such geography gives Birmingham a hilly landform type that stretches 15 miles along the valley and has an area of ​​149.54 square miles. Birmingham is located in both Jefferson and Shelby counties. However, it is the administrative capital of Jefferson County that is the most populous in the state of Alabama.

US Route 280, established in 1954, runs through Birmingham, connecting it to another city in the state of Alabama, Auburn. The 392-mile-long US Route 280 branches off US Highway 80 and passes through various parts of southern Georgia and east-central Alabama. The motorway becomes a major commuter route as it passes through the city of Birmingham.

Birmingham is 90.6 miles from the Alabama state capital, Montgomery. The nearest town to Birmingham is Mountain Brook, just 8.8km away. Birmingham is 94 miles away from the main town of Tuscaloosa Alabama. It is near the city of Atlanta in the state of Georgia, at a distance of 146.5 miles (235.7 km). The elevation of the city is 620 feet above sea level.

The city enjoys a moderate winter and a warm summer season. The lowest temperature is 50.9 degrees and the highest is 73.4 degrees. The climate of Birmingham, Alabama could be described as humid subtropical.

Winters in Birmingham are described as cold, rainy and short. January is the coldest month. The temperature varies between 36°F and 54°F. The cold season in Birmingham lasts for 2.9 months, and runs from November 29 to February 24.

Summers in Birmingham are described as long, hot and humid. The warm season lasts for 3.9 months, stretching from May 25 to September 2. The highest temperatures are recorded in July, when the temperature varies between 30°C and 22°C. The average daily temperature exceeds 83°F.

The city of Birmingham receives 1,440 millimeters (56.6 inches) of precipitation. Thus, the city is known for its significant and abundant rainfall. The driest month is October, during which rainfall averages 85 millimeters. March is the wettest month, in which rainfall averages 145 millimeters. The city receives 213 days of sunshine per year, only an average of 1.6 inches of snow per year, and 56.12 inches of rain. Hurricanes are likely to impact the city, but not at full strength due to the city’s distance from the coast.

The city’s earliest inhabitants were the Cherokee, Choctaw, and Chickasaw tribes, who inhabited the Jones Valley and subsisted on hunting. In 1815 John Jones and his party were the first white men to set foot in the area. They began by creating the village of Jonesboro, and in 1819 Jefferson County was established. The region’s population grew over the following decades as iron ore became the main natural resource and commodity. The iron ore trade flourished throughout the American Civil War but was destroyed in 1865. From then on the progress of the valley halted until 1871. In 1871 limestone and coal , alongside iron ore, have proven indispensable to the steel industry.

This potential was tapped by the Elyton Land Company, which built the city and named it “Birmingham” after the city in England, which produces steel.

After the First World War, the city prospered thanks to the development of new constructions. The newly built city experienced fluctuations in population. As he grew, he began to face problems such as crime and disease. Over the next few decades, new issues emerged, such as labor issues and local government corruption. During the Great Depression, Birmingham was devastated due to its extreme reliance on a single industry, the steel industry. Birmingham began its recovery process when World War II was declared in Europe. At this time, the demand for steel was increasing in anticipation of war. After World War II, the economy continued to grow and diversify. Despite this, Birmingham’s economy was not immune to the economic recession of 1957. Another battleground was racial tensions between blacks and whites in the city. This tension translated into episodes of violence, which convinced the city of the need for change.

Since the 1970s Birmingham has gone through a paradigm shift that has transformed the city into an atmosphere of racial harmony, a champion of civil rights and a leader in healthcare, finance and education. The city has experienced a technological boom, which has resulted in more jobs, prosperity and successful integration.

Birmingham’s modern economy is diverse. The most important sectors are the medical industry, commerce, finance, research, government and a growing telecommunications sector. The city is the headquarters of many power companies such as SONAT and ENERGON Corporation. However, the medical and healthcare industry remains the city’s dominant sector and largest employer. Thus, the most popular and common job in Birmingham is as a registered nurse, which accounts for 3.71% of the city’s total employment. The second most typical job is as a retail salesperson. In 2020, Birmingham scored $62,830.706 in GDP. The median household income in Birmingham is $38,832 per year (2020) and the median individual income is $23,508 per year (2020). Lawyers, financial managers, software developers and pharmacists are among the highest paying jobs in Birmingham.

The city of Birmingham, just like other cities in the south, is well known for its beautiful tourist attractions. The most popular historical and architectural sites are the Birmingham Civil Rights Institute and the Vulcan Park and Museum. Additionally, Birmingham has a place for sports enthusiasts who can visit the Bartow area; and learning enthusiasts who can see the McWane Science Center. In addition, the city hosts the 2022 World Games which take place from July 7 to 17. Birmingham is a leader in green space, with more green space per capita than other US cities of similar size.

9 reasons why you should call Birmingham home