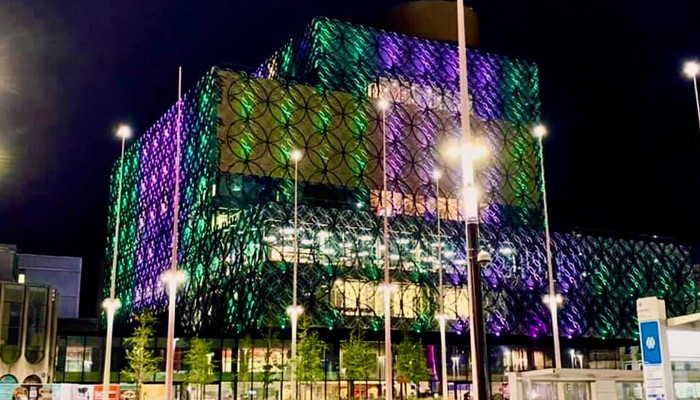 BIRMINGHAM: The Birmingham Library was illuminated in the colors of the Pakistani flag to mark Pakistan’s 75th Independence Day.

The iconic building, located in the heart of Birmingham, was illuminated in green and white for the first time as part of Pakistan’s Independence Day celebrations.

A number of British Pakistanis living in and around Birmingham – the UK’s second largest city – had gathered in Centenary Square outside the Central Library for Independence Day celebrations.

Holding Pakistani flags, dressed in green and white colored clothing, and chanting slogans like “Pakistan Zindabad”, “Jeevay Jeevay Pakistan” and “Dil Dil Pakistan, Jan Jan Pakistan” the crowd paid a rich tribute to those who fought for the freedom to obtain a separate state.

The decision to illuminate the iconic building with green and white lights was initiated by the Deputy Lord Lieutenant of the West Midlands, Dr Nasir Awan, on Pakistan’s Independence Day to mark the celebrations.

Dr Awan, who is also vice chairman of the Greater Birmingham Chambers of Commerce, said Geographic news that this shows how much the diaspora community living here in the UK appreciates Pakistan.

“It is the focal point of Birmingham, a city that is home to over two hundred thousand people of Pakistani descent […] we always have so many small gatherings and events at home, in restaurants or in halls, but this year I had this idea to bring people together in one place to celebrate with passion, ”he said. -he declares.

He is committed to making these celebrations a standard in the years to come.

“I only wish that people come to enjoy Pakistan, remember those who sacrificed their lives for an independent homeland and experience the visions of Quaid-e-Azam and Allama Iqbal,” he added.

Sardar Mohammad Khattak, Consul at the Pakistani Consulate in Birmingham addressing Geographic news, said: “Indeed, it’s a great vibe. I’m so happy to see for the first time that our community is celebrating the day with such passion.”

People said Geographic news that for a year and a half they haven’t been able to celebrate days like Eid and August 14 due to COVID-19, but this year they had the perfect opportunity to express their love for Pakistan and celebrate the day outdoors.

These events are also the perfect opportunity to educate the younger generation living in the UK about the importance of this day and the sacrifices made by their ancestors to achieve freedom.

Another flag raising ceremony took place outside the Birmingham City Council building. The Lord Mayor of Birmingham Mohammad Afzal along with Lady Mayoress, other councilors and members of the community hoisted the national flag of Pakistan to mark Independence Day.

Hudson Valley Can Help The Family of Beloved Business Owner