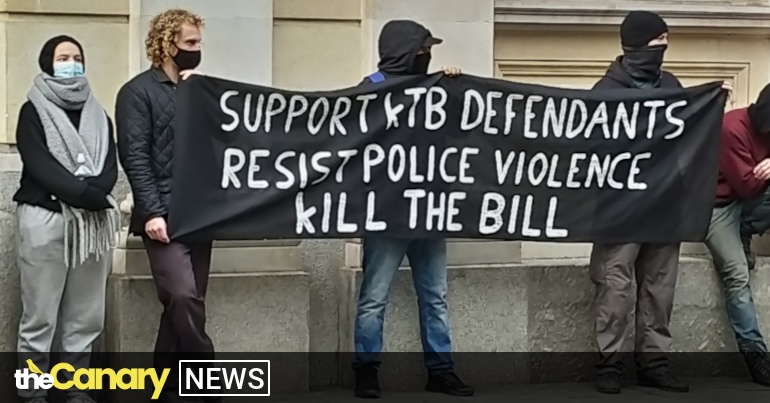 Today the jury was sworn in for the first trial of a protester accused of riots at the Kill the Bill protest in Bristol on March 21. However, supporters, some of whom had traveled long distances, were not allowed to sit in the public gallery for the trial.

Ryan Roberts has pleaded not guilty to all seven counts. Ryan is charged with rioting – carrying a maximum sentence of ten years in prison – and six counts of arson against police vehicles. Ryan has been in pre-trial detention at HMP Horfield since March.

81 people have been arrested following the Kill the Bill protest on March 21 in Bristol, and police are still seeking further arrests. If they are found guilty, they face long prison terms.

Eight of those arrested have pleaded guilty to date. They received sentences totaling 29 years in prison. But the base groups in Bristol have condemned police violence against protesters on March 21 and said they were proud of the defendants for retaliating against police.

On the morning of October 25 – the first day of trial – 40 people gathered outside Bristol Crown Court in solidarity with Ryan. Several protesters wore brightly colored riot shields – symbolizing the need for our communities to protect themselves from the police. The shields were decorated with colorful designs and slogans, including “Stand up for travelers’ rights” and “We didn’t start the fire, it was still burning”.

As the Serco vans arrived, bringing defendants – like Ryan – from their jail cells, the crowd chanted “Our passion for freedom is stronger than your prisons” and “Our neighborhoods want peace, abolish the police”.

Several people shared news of the protest on Twitter:

Today is the first day of trial for Ryan Roberts, who was convicted of rioting and arson during KTB protests in Bristol this year.

People stand outside the courthouse, holding these recovered police shields as a symbol of defiance against police violence and all that it stands for. pic.twitter.com/uGxSNlKsTo

The sisters are at Bristol Crown Court with @ BristolDefenda1 in support of #KilltheBill protester Ryan Roberts who pleads NOT GUILTY of riot. #DefendTheRightToProtest# Solidarity Forever pic.twitter.com/EIleXkeGfG

While the protesters were packing – before the case began – officers intervened to stop and search the protesters. They grabbed the shields, claiming they had to check to see if they were Avon & Somerset Police. The Canary He was told that officers cited the police law and criminal evidence.

A call was designed to have people “fill the courtroom” to show the level of public support for Ryan. However, when people entered inside, they were invited to watch the trial from another room via video link. Several people tweeted angrily:

RT Disgusting and bossy. This is a violation of the principle of open justice. People have come from all over the UK to support Ryan Roberts in the trial and Bristol Crown Court has closed the public gallery for this trial only. #KilltheBill https://t.co/sNqmulXXCb

Utterly blatant attempt to undermine Ryan Roberts’ solidarity and support at Bristol Crown Court. Demand that the court open the public gallery now. Others are open – there is no excuse for this lack of transparency. #KillTheBill https://t.co/JgTq1ApmC8

Bristol Magistrate’s Court has received similar complaints, after restricting access to the public gallery during hearings for Kill the Bill defendants.

The Canary asked Bristol Crown Court to justify closing the public gallery, but we had not received an official response at the time of posting.

“an ideological attack on solidarity with Ryan”

The choice to close the public gallery is a direct violation of the concepts of “democracy” and “justice” of the legal system. It is an ideological attack on solidarity with Ryan, but also solidarity with all prisoners and accused within the justice system.

The closing of the public gallery is a tactical choice of the court to isolate the accused – an extension of the isolation that prisoners already face – and to create a barrier between those charged and the observation of “justice” by the public. It is an attempt to break the strength of our communities and the solidarity that we have. But they will never win!

“The police acted with impunity”

Basic groups Bristol Defender Solidarity and Bristol Anarchist Black Cross issued a statement in favor of Ryan and all of the accused:

We stand in solidarity with Ryan and all of the KTB defendants. Police acted with impunity during the KTB protests. Protesters seated on the road were severely assaulted. People were sprayed with pepper and beaten with batons and shields. 62 people were injured during KTB protests in Bristol in March.

“It is not a crime to fight against police violence”

It is not a crime to fight against police violence and state repression. We cannot stand aside when people are being beaten. And each of us has a duty to stand in solidarity with those persecuted for retaliating.

Solidarity with those who bear the brunt of the bill

Both groups called for solidarity with the groups of people most affected by the police bill:

This repression will worsen. The Police, Crime, Courts and Sentencing Bill, currently under consideration in the House of Lords, will make it easier for police to criminalize and jail protesters. But the bill is not just about protest. We stand in solidarity with the Gypsy, Roma and traveler communities whose way of life is prohibited by this bill. We stand in solidarity with blacks, who already bear the brunt of racist police forces, who will be disproportionately targeted by the stop and search powers in the bill. In Bristol, black men are nearly ten times more likely to be arrested and searched than white men.

We stand in solidarity with those who will be criminalized and locked in jail even longer because of the bill.

The jury was sworn in and the trial was adjourned until tomorrow morning. A jury member had to be replaced after the defense asked if any of the jury members were police officers on duty or had family members on the police.

The prosecution will open its case tomorrow morning. Another demonstration is planned in support of Ryan on October 27.

The trial is expected to last until at least October 28.

Nicola Sturgeon wonders why delegates get travel cards at climate summit, but no such program for locals

Your Guide to Birmingham’s Beautiful Murals in 2021 – Part 3