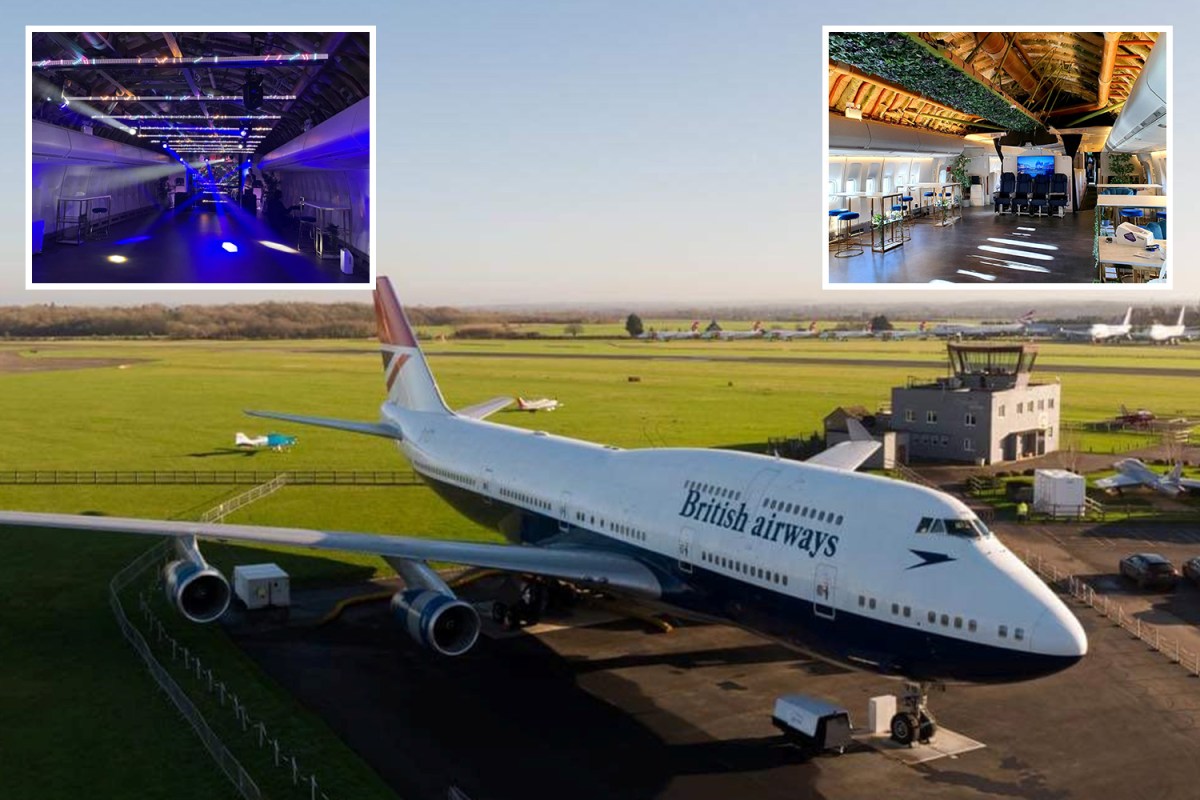 A BRITISH Airways jet bought for just £1 has become the world’s first to be converted into a bar to host lavish airplane parties.

The BA Negus ‘party plane’ sits at the Cotswolds Private Airport – and is available to hire.

It has been transformed into an event space to accommodate everything from private birthday parties to product launches and corporate events.

The Boeing 747 plane is kept at the site near Cirencester after British Airways withdrew its fleet early due to the slowdown in travel caused by the pandemic.

It was bought for just £1 in 2020 and has since been a labor of love for airport chief executive Suzannah Harvey after British Airways withdrew its fleet early due to the pandemic.

Suzannah said: “I paid a pound for it, and we have some obligation to maintain it as it is practical for public use.

“The company must have spent nearly £500,000 to get it ready and ready here, but I think it’s money well spent and preserves it for future generations.”

A full rewiring with custom lighting was done while it also took a man a week and a half to give it a good cleaning inside and out.

Suzannah added: “It’s been a long slog. It came to us in October 2020, and at the time I quite naively thought we’d have it up and running by Easter.

“We’ve had tremendous support from everyone. All the contractors, all the people who have volunteered and are currently BA 747 engineers – and we’re finally there. She’s ready and she’s ready to to leave.”

Its last passenger flight was from Miami to Heathrow on April 6, 2020.

Anyone now wanting to host a party on board will have to pay upwards of £1,000 an hour, but Suzannah said they have been inundated with enquiries, including from Netflix.

She also said an app will soon be launched to allow the general public to book tours of the aircraft.

Suzannah added: “The vision has finally come to fruition, with overwhelming support from volunteers including current BA engineers and half a million pounds of investment later, Negus 747 is finally ready.

“Preserved for many years to come and for future generations, Negus is the only custom-built event 747 in the world.”

This isn’t the first time an aircraft has been transformed into something other than its original purpose.

See inside the Boeing 727 a woman converted into a three-bedroom house with a huge hot tub in the cockpit.

Discover the plane that a man has transformed into a house in the middle of a forest.

You can book to spend a night on a decommissioned plane in one of Airbnb’s wacky listings.

MOEX plans to claim more than 1,500 international stocks in 2022: a batch of 80 will be launched in February

Edinburgh in ‘position of strength to launch crackdown on Airbnb’