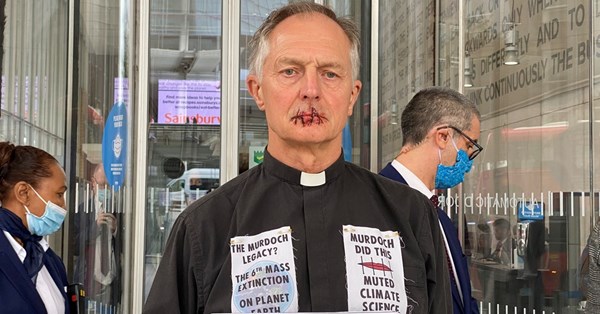 RETIRED Priest Reverend Tim Hewes sewed his lips together and stood outside News Corp’s offices in London on Monday to protest company owner Rupert Murdoch for his ” denial of the climate emergency ”. Mr Hewes, who is 71 and licensed to serve in the Diocese of Oxford, made a video statement before stitching his lips together, posted by Christian Climate Action. He said: “Today countless people around the world are speechless and suffering because of the climate emergency. Climate science and the truth have been muted, and those who suffer are not heard. I have tried every other means I can think of to end the influences and madness represented by Rupert Murdoch and his denial of the climate emergency. Another priest, the Reverend Mark Coleman, attempted to deliver a letter to Ben Webster, environmental editor Time, which News Corp owns, but was told Mr. Webster was not in the building. Mr Hewes was sentenced to 14 days in jail in March for contempt of court after gluing himself to courtroom furniture during hearings following a protest against the Extinction Rebellion (News, March 26 ).

ST MARY MAGDALENE’s, Caldecote, Hertfordshire, was damaged by vandals on Thursday last week. It had only reopened ten days previously, having been closed for nine months while repairs were being made. A message posted on the church’s Facebook page last Friday read, “Yesterday, late afternoon, July 29, our church was the target of an insane act of vandalism. Although nothing of value was stolen, the vandals had fun using CO2 extinguishers inside, smothering everything in a thin layer of white powder. The church is said to be closed while police investigate the case and the cleanup takes place, the post said.

New President and Vice President of the Anglican HE Network

THE Vice-Chancellor of Bishop Grosseteste University, Lincoln, Professor Canon Peter Neil, has been elected President of the Colleges and Universities of the Anglican Communion (CUAC), a network of over 160 Anglican higher education institutions out of the five continents. The former Bishop of Newcastle, the Right Reverend Martin Wharton, has been elected Vice President. It is believed to be the first time the incumbents of both posts have been British.

Christian MP and former Liberal Democrat leader Tim Farron last week launched a petition calling for changes in planning laws to prevent family homes from being turned into second homes and vacation rentals. Mr Farron, MP for Westmorland and Lonsdale, Cumbria, said: ‘In rural areas of the UK, from Cumbria to Cornwall and from Wales to Northumberland, the explosion in the number of family homes being turned into second homes and vacation rentals transform our beautiful vibrant communities into ghost towns. The Bishop of Truro, The Right Reverend Philip Mounstephen, said during a debate on the housing crisis at the General Synod last month that buying second homes in Cornwall had a devastating impact on the entire community by denying homes to locals (News, July 16) There was also a crisis in the rental sector, he said. Sunday Times reported this week that Tory MPs from areas such as Norfolk and Cornwall were urging Housing Secretary Robert Jenrick to introduce measures such as the regulation of Airbnb rentals; incentives for landlords to rent to local people; and restrictions on the number of second and vacation homes.

RETIRED priest Paul Battersby, 72, was sentenced to four years in prison at York Crown Court on Tuesday for uploading images of child sexual abuse. Police discovered 832 images on Mr Battersby’s internet devices when they unexpectedly arrived at his home last October to carry out checks, the BBC reports. In addition to a four-year sentence, along with a three-year extended license, Mr Battersby, of Spencer Walk, Skipton, also received a new Sexual Injury Prevention Order and ordered to sign the Offender Register sexual. Mr Battersby was sentenced to 20 months in prison in 2017, after a Liverpool Crown court learned he had uploaded more than 1,700 indecent images (News, September 1, 2017). He was given a suspended prison sentence for child sex offenses in 2008 (News, March 26, 2008).

THE Changing Attitude England steering group released a definition of what it means by “radical Christian inclusion,” after writing to the Archbishops of Canterbury and York in May to request a definition. In February 2017, Archbishop Welby called for “a radical new Christian inclusion in the Church” after the synod voted against the House of Bishops report on sexuality (News, February 17, 2017). The definition of attitude change is: “LGBTIQ + people will be fully and equally included in the life and practice of the Church of England when equal marriage, the blessing of our relationships and equality in ministry will be achieved. “

Petition for Sunak to close the holidays …

City of Birmingham: Eating in the streets will continue until the fall

Witch Fever: “We are not pursuing a movement that is already…