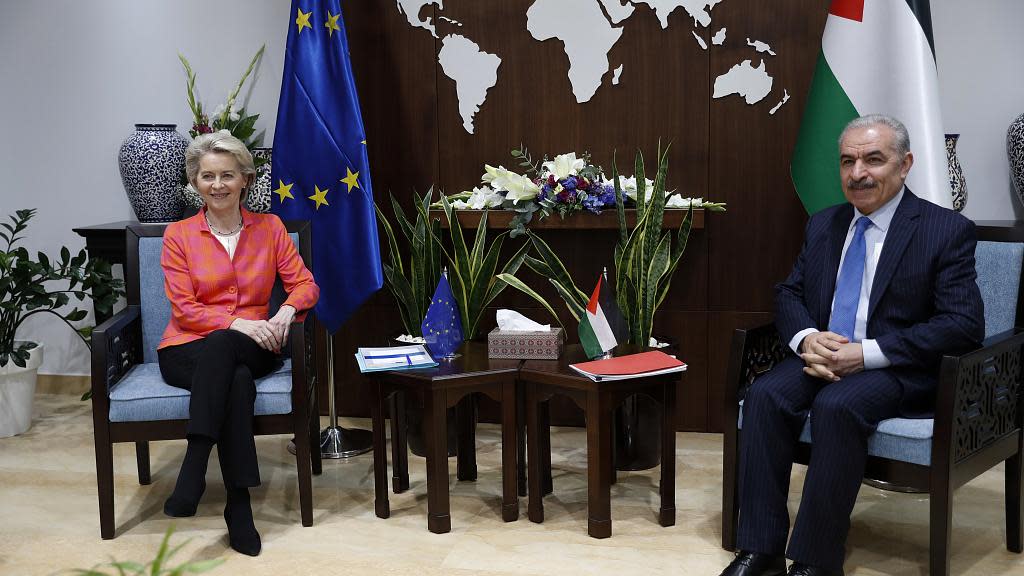 After months of inter-institutional disagreements, the European Commission has approved a long-delayed bilateral aid package for the Palestinian Territories.

The breakthrough coincided with a visit by Commission President Ursula von der Leyen to Israel and the West Bank as part of her Middle East tour.

“I am very happy to report that EU funds for 2021 can be disbursed quickly. All difficulties have disappeared,” von der Leyen said on Tuesday, speaking alongside Palestinian Prime Minister Shtayyeh.

“We have made it clear that the disbursement will take place.”

An internal dispute involving the Commission, the European Parliament and the Member States effectively blocked the publication of the 2021 program of financial aid intended for the Palestinian Authority.

The envelope, which should be valued at around 200 million euros, is used to pay the salaries and pensions of certain West Bank civil servants, to support hospitals and to provide aid to vulnerable households.

“Our aim is to finalize the procedure shortly and once finalized the funds will be released as soon as possible. East Jerusalem hospitals and stipends for vulnerable Palestinian families are prioritized,” a Commission spokesperson said Monday in response to a question from Euronews.

“The EU continues to be the largest donor in Palestine. We have mobilized over €2 billion since 2014.”

What was behind the delay?

The budget stalemate centered on a conditionality regime introduced by Olivier Várhelyi, the European commissioner who oversees relations with countries neighboring the EU.

The EU does not provide funds to design and print textbooks, but pays the salaries of many Palestinian teachers who use the materials in their classrooms.

The Commissioner’s objections were based on an independent study by the Georg Eckert Institute which “revealed a complex picture”: the books meet UNESCO standards and are “strongly focused” on human rights, but also present “antagonistic narratives” and “one-sided representations” of Israel and its citizens.

“Arabic-language textbooks contain emotionally charged descriptions of Israeli violence that tend to dehumanize the Israeli adversary, sometimes accusing him of malevolence and deceptive behavior,” notes the report, published last summer, in his abstract.

Várhelyi, who before his current post worked as a diplomat for Hungarian Prime Minister Viktor Orbán’s government, introduced new financial conditions on the funding following the report’s findings.

According to the official, the Commission has stepped up its engagement with the Palestinian Authority to address what he called “highly problematic issues” highlighted by the Georg Eckert Institute.

“The EU does not tolerate incitement to hatred, violence as a means to achieve political ends, or anti-Semitism in any form. Any such material has no place in textbooks or classrooms,” the official said last month in a written response in the European Parliament.

Despite Várhelyi’s insistence, the conditionality scheme failed to gain the necessary approval from member states, with at least 15 expressing their disapproval of the delay in a letter to the commissioner himself and obtained by POLITICO Europe.

National representatives are consulted on the Commission’s aid program and can block it by forming a qualified majority (55% of EU countries representing at least 65% of the EU population).

“It is clear that the Commission’s current proposal, which aims to introduce conditionality in the education sector, does not enjoy wide support,” reads the letter.

“When it was put to the vote, eighteen Member States voted against or abstained. All of these Member States, and others, have since asked the Commission to urgently submit its initial proposal.”

New opposition had been expressed by three groups in the European Parliament – ​​the Socialists and Democrats (S&D), the Greens and the Left – in a letter to President von der Leyen.

“While we condemn in the strongest terms all acts of anti-Semitism, racism or incitement to violence or hatred in all their manifestations, we are also convinced that such an initiative and decision – based on unfair allegations – would only be counterproductive and create unnecessary tension between ” said the trio in March.

They added that the study concluded that the textbooks had adhered to UNESCO standards and recognized positive changes in 2020/2021.

“These dynamics should be encouraged, not hindered, to ensure progress toward the goal of eliminating hate speech and incitement on both sides in the Israeli-Palestinian conflict,” the three groups said. policies.

On the other side of the debate, a cross-party group of 22 MPs asked last year that the funds be withheld until the Palestinian authorities replace the “dreadful books” which they say promote widespread incitement.

“It is impossible to imagine a future where Palestinians and Israelis will live in peace and security next to each other as long as Palestinian children are taught to hate,” the lawmakers wrote.

Even though the disagreement was on the specific issue of textbooks, it hampered the release of all financial aid, including health funds.

The Norwegian Refugee Council strongly criticized the delay, saying the suspension “crippled” essential services with “disastrous consequences” for patients in need of treatment.

Prior to von der Leyen’s visit, the Palestinian authorities had expressed their hope that the funds will be approved without conditions.

This article has been updated to include new developments and reactions.

Airbnb calls them the 10 best summer travel destinations for 2022