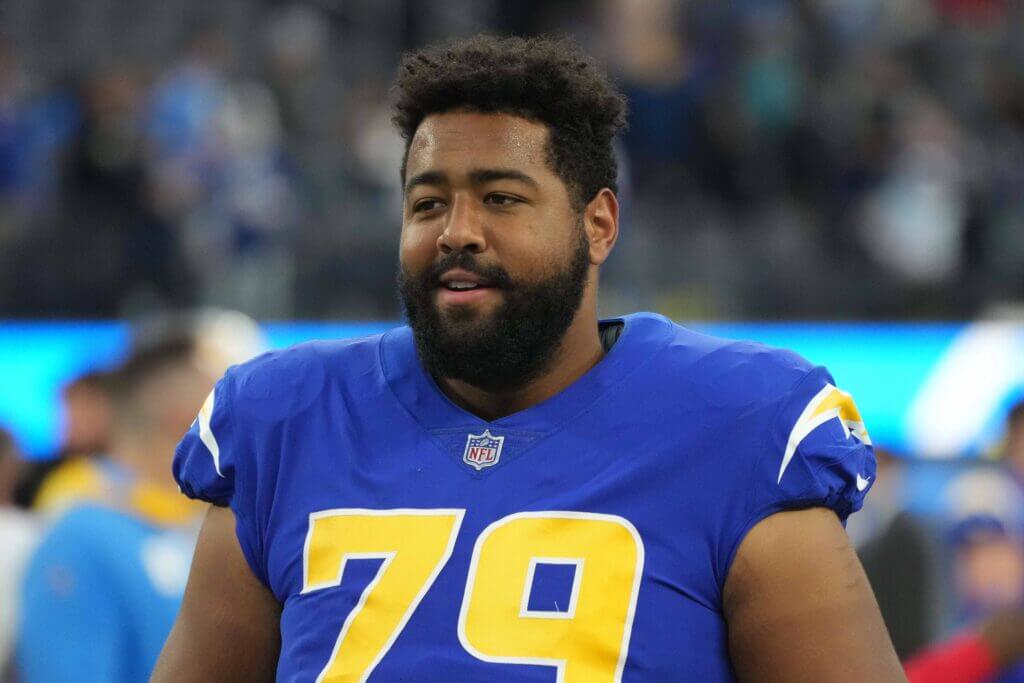 As the 2021 season drew to a close, discussions in the Chargers’ offensive line room focused on offseason plans. And Trey Pipkins was looking for a place to work.

Rashawn Slater was coming off a rookie All-Pro season at left tackle, and he planned to return to Texas to train with offensive line coach Duke Manyweather, who had also trained Slater ahead of the 2021 draft. Oday Aboushi was still rehabilitating the torn ACL he suffered in Week 5, but he too was planning to return to Manyweather once his knee was healthy enough.

Slater and Aboushi loved the offseason offensive line workouts that Manyweather hosts in Dallas. Pipkins asked questions and listened, and he liked what he heard.

“I just knew I wanted to go somewhere where I could get a lot of good O-line work in the offseason, as well as lifting and running and stuff,” Pipkins said after practice earlier this month. . “I kind of spoke it in their ear and just decided to go out there and see what it was all about.”

After the season ended, Pipkins packed up and went to Dallas with his wife and young son, renting an Airbnb in the area. And alongside Slater and a number of other NFL offensive linemen, Pipkins honed his craft in what inevitably amounts to the most pivotal offseason of his professional football career.

It’s no secret that the Chargers have an opening at right tackle. They didn’t address the position in the offseason. And that means they will look for an internal answer. Storm Norton was the starter there last season. Norton and Pipkins will compete for the starting spot in training camp.

Pipkins says he is a changed player – physically, mentally, technically. That improvement has continued since he was drafted in the third round in 2019 from Sioux Falls Division II. But he said he made another big move in Dallas this offseason. And Pipkins, entering the final year of his rookie contract, is eager to show Brandon Staley and the rest of the Chargers coaching staff that he is the solution to the right tackle – for 2022 and beyond.

“I can’t wait to get into training camp, really,” Pipkins said with a smile.

Pipkins entered his offseason with considerable momentum, but it was a battle to get there. He was fourth on the tackle depth chart coming out of training camp last season, behind starters Slater and right tackle Bryan Bulaga and swing tackle Norton. When Bulaga went down with what ended up being a season-ending injury in Week 1, it was Norton who took over at right tackle for the rest of the season.

Pipkins’ only shots in the first six games came as an extra offensive lineman in jumbo packages. He didn’t do well in that role. And after a particularly poor showing against the Ravens in Week 6, Pipkins was benched. He was inactive for four straight games in Weeks 8-11.

“I was irritated with myself,” Pipkins said.

Pipkins waited for another chance, and it finally came in Week 15, in a Thursday prime-time showdown with the Chiefs. The AFC West’s top spot was on the line. Slater was unavailable after being placed on the COVID-19 list, and Pipkins was the next man.

He started at left tackle and had the best game of his career. He was solid in pass protection. He was a force as a run blocker.

It was a turning point.

“Going out there and showing that I could still play tackle, that was important to me – because I knew I could still do it,” Pipkins said. “I wanted to prove to people that I deserved to be here and play.”

Two weeks later, Norton was inactive as he was still recovering from a stint on the COVID-19 list. Pipkins was again called into action. He started at right tackle and played another stellar game in a must-watch game for the Chargers. He didn’t allow a single pressure in 67 attacking snaps, according to Pro Football Focus.

Those two Pipkins games turned heads inside the Chargers building. It certainly seemed like Pipkins had taken a leap in his development. He was no longer the baby-faced neophyte who had been forced into action sooner than expected as a rookie. Pipkins is rocking a full beard now, and he’s completely filled out his 6ft 6in frame as well. When asked how different a player he was from his rookie season, Pipkins replied, “It’s astronomical.”

Players move at different speeds. For every Slater, who emerged as one of football’s best left tackles in his very first NFL game. there is a Pipkins. When the Chargers drafted Pipkins in 2019, they knew he was going to be a draft. He had tantalizing athletic traits, but he had a long way to go from a technical standpoint to compete regularly in the NFL.

Did those Pipkins performances realize his full potential? That remains to be seen. But, with Norton’s positive moments last season, it was enough for the Chargers to feel comfortable making a good tackle this offseason. 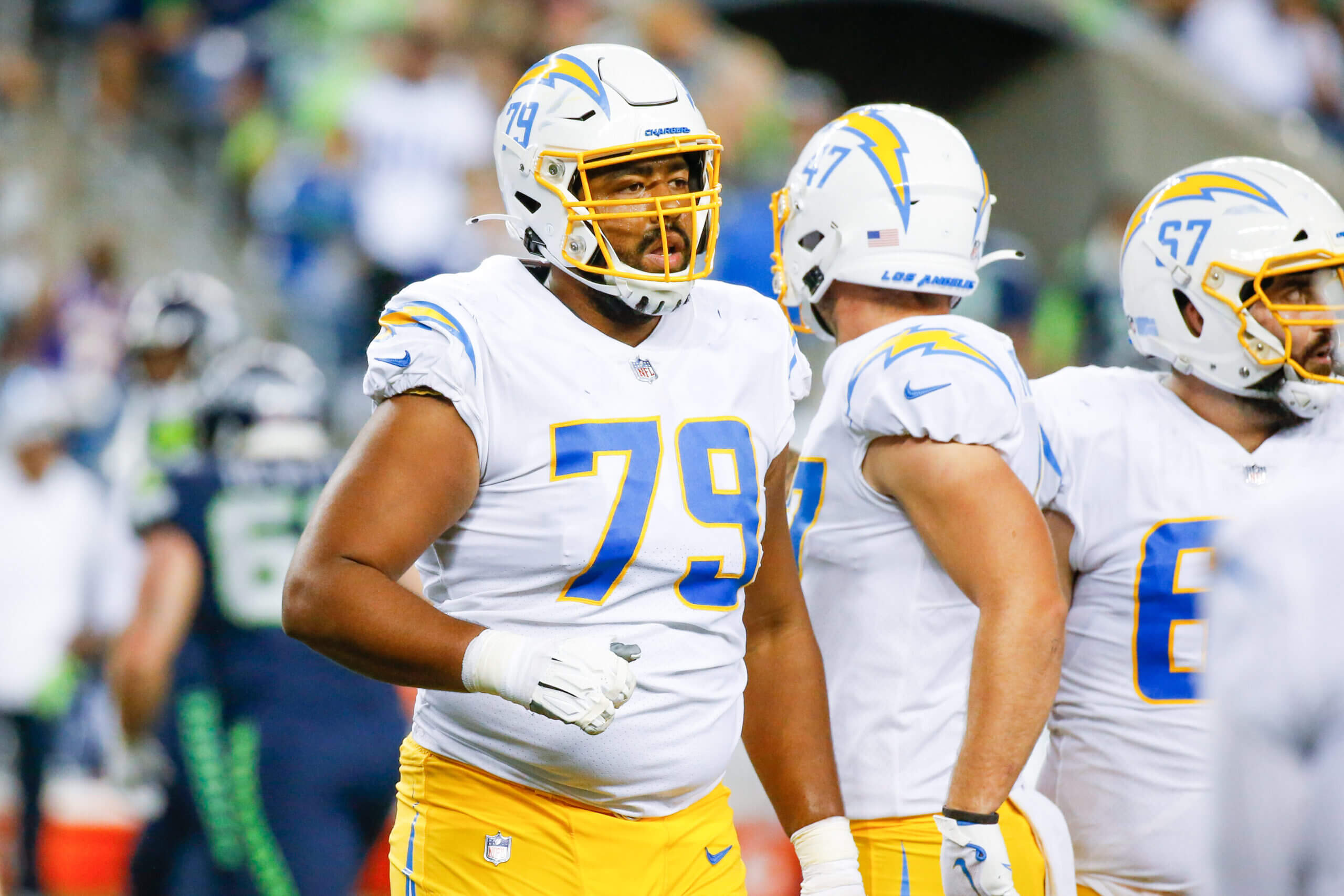 Chargers tackle Trey Pipkins opened his eyes late last season and was aiming to build on them this offseason. (Joe Nicholson/USA Today)

Pipkins, meanwhile, worked with Manyweather in Dallas. He highlighted several key points from his training.

He spent time with established NFL veterans, like Terron Armstead and Charles Leno.

“The best part about it is all the guys that are there,” Pipkins said. “You hear so many different ways that guys think about the game. … The working and lifting and conditioning and everything is really good, but the best part was just being around the guys, hearing how they think about their passes in certain situations and blocking those techniques and stuff like that, I think that’s what helped the most, that’s for sure.

“He’s so good with just the biomechanics behind stuff, stuff you never think about,” Pipkins said. “The O line coaches…are super good with all the football stuff and stuff like that, but they don’t necessarily know all the biomechanics stuff that strength coaches know. So (Manyweather) kind of knows both aspects, and the way he implements this biomechanical stuff in the O-line exercises is really cool.

One example, Pipkins said, was activating the glute muscle in his back leg to its pre-slam position. On tape, Pipkins showed that he kept that muscle relaxed in his position so he could put his weight on the instep of his foot. At the snap of his fingers, Pipkins should activate his glute muscle to explode in his set. And it was a millisecond that he lost in his initial movement.

“As soon as I started moving, my knee would lock out to activate my glute to push off,” Pipkins said. “And so, if you stay activated, you can push without that extra movement.”

This may seem like a minor adjustment. But winning pass protection reps is all about margins. A millisecond here or a millisecond there is the difference between getting up a pass rusher or giving up a sack. And the same goes for things like hand placement, elbow angle, or the direction you push when making initial contact with a pass rusher – “stand up and don’t push”, as the Pipkins said.

“It’s just little things that make a huge difference,” Pipkins added. “I changed a lot in my set which I really like and in which I feel really good.”

Pipkins returned to Dallas on Saturday, three days after the Chargers completed the mandatory minicamp. He will train with Manyweather during summer vacation before returning to Southern California for the start of training camp in late July.

There, Pipkins will use what he’s learned — both this offseason and over the past three years — to earn a starting job for the first time in his career.

“It’s definitely an opportunity,” Pipkins said, “and I’m looking forward to it.”