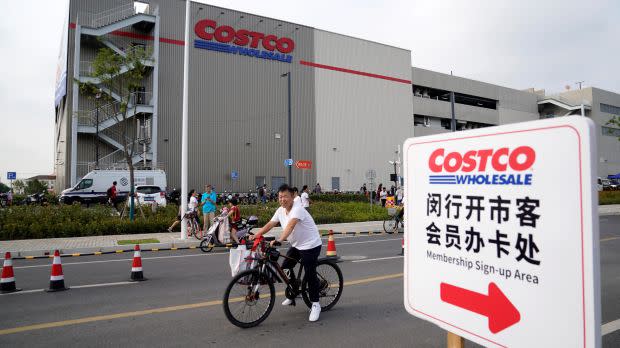 Chinese influencers can’t go to LA, so they pose in a Costco in Shanghai

Coronavirus restrictions have kept Chinese travelers isolated from the outside world for nearly two years. To deal with it, influencers nationwide have found a new way to keep themselves entertained and entertain their followers: snapping photos outside the U.S. big box Costco in Shanghai and pretending to be in Los Angeles.

China adopted strict border controls since the start of the coronavirus epidemic early last year. Until now, it remains difficult for the Chinese to travel outside the country, which tightened issuance and renewals passports to contain the pandemic.

Many young Chinese people stuck at home have found ways to create a sense of being somewhere else. On Chinese social media, they posted photos of themselves in photogenic places in China with captions such as “pretending to be in a foreign country.” The latest example of this trend is that of influencers posing in front of the Shanghai Costco, known as kai shi ke (开市 客) in Chinese, the Xiaohongshu social shopping and lifestyle app (Little Red Book).

More than 200,000 people subscribed to a Costco subscription when the store opened in Shanghai 2019, wait more than half an hour pay for their goods on the opening day. The chain plans to open its second store in the country in November, in the southern city of Suzhou.

Just like elsewhere in the world, the culture of influence has taken off in China. Called “famous Internet” in the country, some have achieved equal status with movie stars, garnering followers in the Tens of millions on the Chinese Internet. Costco snappers, whose followers range from a few hundred to 200,000, regularly post articles about their outfits, visits to popular Chinese cafes and restaurants, and trips to fashion shows. Chinese influencers often seem to lead internationalized lifestyles, teaching people how to dress in American fashion or showing off handbags from brands like Chanel, in an effort to entice followers keen to adopt an American lifestyle. the fashion.

Influencers don’t seem to be trying to trick their followers into thinking they’re really in LA. On the contrary, photos are tongue-in-cheek guides to making one’s photos more exotic when travel options are limited.

“Costco is really awesome, the pictures taken there really make you feel like you’re in LA! If you also want to take such photos, I suggest you arrive here around 4pm, when the light is good… and don’t forget to wear brighter colored clothes! posted a user from Xiaohongshu this month. Another app influencer thoughtfully reminded her followers that if they are not Costco members, they should bring “props,” such as a pizza box and Coke, to take pictures because members can purchase the items directly from the channel. The influencer wrote. “If you cover the license plates [it] looks exactly like if you were in LA.

The number of Chinese tourists to the United States had steadily increased in the two decades leading up to the pandemic, bringing in billions of dollars in tourism revenue to the country. The tensions of the trade war saw the number is declining for the first time in years at about 3 million Chinese citizens in 2018. China was still the third largest source of foreign travelers to the United States that year.

Costco’s popularity with influencers is an illustration of Chinese citizens’ continued interest in American culture and brands, despite lingering tensions between the two countries over trade, politics and the spread of the coronavirus. Tickets for the opening day of the new Universal Studios theme park in Beijing last month exhausted in a minute on some Chinese online booking sites.

Register for the Quartz Daily Brief, our free daily newsletter with the most important and interesting news from around the world.

LA Rochelle becomes frank on his new track “All Away”

Province announces affordable housing initiatives; relief in sight for some