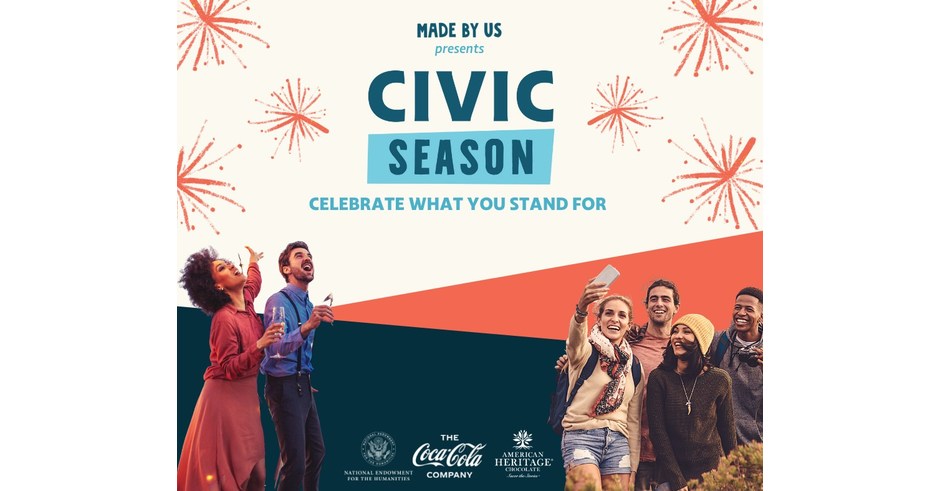 Civic Season mobilizes Gen Z to participate in our democracy, meet curiosity with credibility with hundreds of activities from June 16th to July 4th

The season starts on June 12 with celebrations in over 20 communities, including a live stream of the party at the Atlanta History Center Midtown in Atlanta, Georgia featuring music, food trucks, chocolate tastings, giveaways, two hosts, the announcement of the fifth annual Civvys Awards, unscripted dialogue between food leaders, and booths from local civic organizations . For more information and to RSVP, Click here. This event is accompanied by a quiz brunch at the New York Historical Society; “We the People” tour at the HistoryMiami Museum; the “Democracy Culture Summit” with michelle obama in Los Angeles; “Becoming Weatherwise” climate exhibit at the American Philosophical Society in philadelphia cream; “Feast of Reason” Civic Dialogues at the Thomas Jefferson Foundation, Monticello; and other public and private celebrations throughout the weekend.

“As the United States approaches its 250th anniversary, we have the opportunity to reconnect with our complex past, strengthen our present, and inform our future,” said Patrick Madden, Executive Director of the National Archives Foundation. “We are proud to be one of the many organizations pioneering this growing national tradition to inspire people to come together to learn, celebrate and shape the way forward for our nations. »

Anchored by Juneteenth and Independence Day – two dates that highlight the gap between our nation’s promises and practices – Civic Season it is a question of welcoming the future heirs of United States to learn more about our nation’s history so they can use it to inform and inspire civic participation for generations to come.

“Civic Season is hosting a nationwide conversation — in virtual spaces and in real life — and urging everyone to understand the impact of our past to better integrate those lessons into our lives,” said Caroline Klibanoffmanaging director of Made By Us at the National Museum of American History.

More than 500 activities and resources are available on TheCivicSeason.com, including podcasts, walking tours, how-to guides, in-person programs, simulations and videos. Navigation tools such as quizzes, top picks from well-known leaders, like ken burns, Jose Antonio Vargas and Lonnie G. Bunch III, poster generators, a Storycorps collection and an online zine help users get involved, whether they have 5 minutes or a whole day, whether they are interested in immigration, architecture or recycling, or that they want something social or solo. Civic Season is supported by the National Endowment for the Humanities, The Coca-Cola Company, AMERICAN HERITAGE® Chocolate and Airbnb.

“AMERICAN HERITAGE® Chocolate is proud to support Civic Season in its second year. We encourage people to get involved and learn more about ways to support the initiatives that are most important to them,” said Gail BroadrightSr. Director Premium Brands Sales, Marketing and Ux, March Wrigley.

The tradition will build and grow in the years to come, reaching 100 million young adults by the nation’s 250th birthday in 2026, providing resounding opportunities for them to contribute to American history.

About Made by usMade By Us is an unprecedented collaboration of more than 130 history museums nationwide to better engage Millennials and Gen Z in American history to inspire, inform, and strengthen civic engagement. Collectively run by the Smithsonian’s National Museum of American History, by Thomas Jefferson Monticello, the National Archives Foundation, the First Americans Museum, the Atlanta History Center, the HistoryMiami Museum, the Senator John Heinz History Center, the New-York Historical Society, the Charles H. Wright Museum of African American History and the Missouri Historical Society, Made By Us creates programs and digital platforms to connect young people from all corners of the country with our shared past, present and future. For more information, visit historymadebyus.com or follow @historymadebyus on Twitter, Instagram or Facebook.