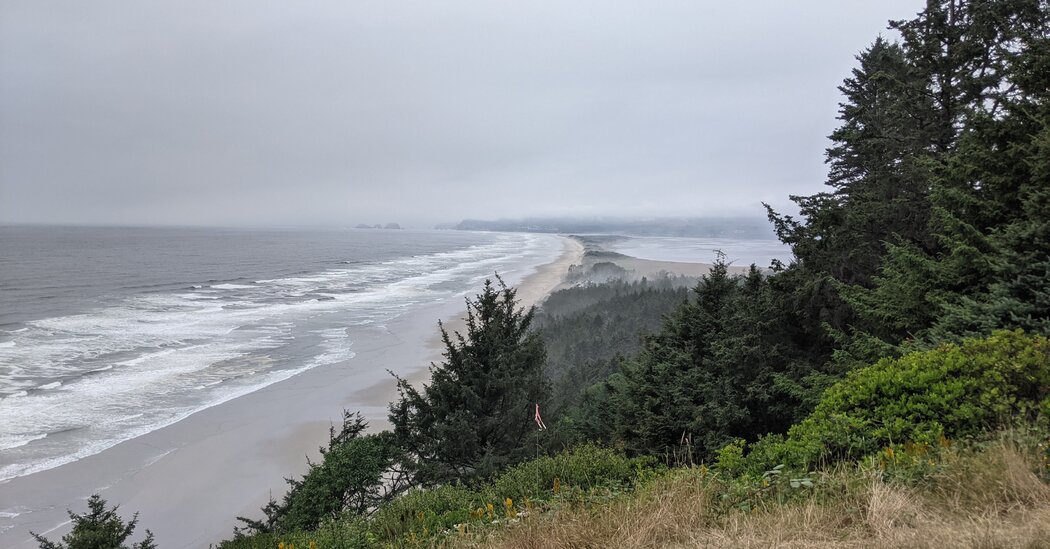 Do the Less Traveled Loop on the Oregon Coast

The tiny hamlet of Netarts, Oregon, protected by a long stretch of sand from the churning Pacific Ocean, is so small you might miss it if you didn’t know it was there. But on a Saturday morning in October, Netarts Bay was teeming with small motorboats and kayaks, whose occupants searched for the delicious crabs and scallops that thrive in its brackish waters, as oyster farmers waited for low tide.

A gray-haired man in jeans and Birkenstock was walking his dog by the water’s edge. Notebook in hand, I asked him what his favorite spots were on this often overlooked portion of the rugged Oregon coast. He wouldn’t bite.

“Who would give up? He asked shaking his head.

Netarts, whose oysters are prized by restaurateurs, is one of the many hidden gems of the Three Cape Scenic Loop – a 40-mile winding road along windswept cliffs, through towering forests of Century-old Sitka spruce trees overlooking ribbons of sand and dairy farms. and charming seaside towns. The drive alone is spectacular, but each of the capes – Cape Meares, Cape Lookout, and Cape Kiwanda – is a treasure in itself, with its own ecosystem, hikes, and wildlife.

Because driving the loop requires exiting the main north-south highway, US 101, many visitors walk right past it, missing out on some of the West Coast’s most spectacular views and natural scenery.

My husband, photographer Scott Robinson, and I discovered the loop on a recent two week RV trip through Oregon. Scott is obsessed with the #vanlife movement, and for our Oregon adventure, we rented a 19ft RAM Promaster with knotty pine panels, butcher block counters, and its own name – Carmen – through an outfit called GoCamperVans.com, which works much like Airbnb for vans. We flew to Portland, picked up Carmen from her owners and headed for the coast. The goal was to unplug and slow down.

Our first two stops, Astoria and Cannon Beach, are on many Oregon Coast routes, but neither provided the kind of calm we craved. This only happened when we reached the small town of Tillamook, about 40 miles south of Cannon Beach along Highway 101, and made a right turn towards the sea.

The three capes form a good part of what Oregonians call the “Tillamook Coast”, named after the city best known for its dairy (a major tourist attraction here), and other purveyors of cheese, such as the Blue Heron French Cheese Factory, which also has a farm for the kids – and a peacock that roams the property. We stopped there at the end of our tour of the three capes.

We had previously been alerted that there was a break in the scenic loop at its most northerly point, Cape Meares, where a landslide unfortunately forced part of the route to close. This prevented us from heading north to the site of what was once Bayocean, known to locals as “the city that fell into the sea.”

Although we missed it, the Bayocean story is worth mentioning – a testament to the power of nature to put humans back in their place.

In the early 1900s, developers seeking to create the “Atlantic City of the West” built an entire resort town on a strip of land stretching north of Cape Meares, separating the Pacific from Tillamook Bay. . This town, Bayocean, had a luxury hotel, a bowling alley, a natatorium and even a railway line. But by the 1950s much of Bayocean, battered by storms and beach erosion, had been washed away, its ruins later bulldozed. Today, there is not a single building left.

Our first stop on the loop was the Cape Meares Lighthouse, the shortest lighthouse on the Oregon coast. We ran to get to the scenic vantage point as the sun was setting and found a handful of other visitors including lighthouse enthusiasts who marveled at the unusual cherry-colored panels of its Fresnel lens from French made.

The interior of the lighthouse is off-limits to tourists due to the pandemic, but the point it stands at is a perfect place to look for the gray whales that migrate along the coast, or – if you’re lucky and there right time of year – peregrine falcons nesting on cliffs in spring.

Steps from the lighthouse is a landmark of the coast: a giant Sitka spruce top 105 feet tall and 14 feet wide known as the “Oregon Octopus Tree”. The tree, believed to be 200 to 300 years old, has no central trunk; instead, its many trunks branch out horizontally before turning upwards, candelabra-like, towards the sky. One theory holds that the massive spruce tree was shaped this way by the Tillamook people, the Native Americans who once occupied this land.

Shellfish lovers will find paradise along the Trois Caps panoramic loop; Netarts Bay is home to a series of oyster farms, including Netarts Bay Oyster Company; Nevor Shellfish Farm, whose retail store is open daily from noon to 5 a.m., and JAndy Oyster Co., a small family business that recently opened a tasting bar near Tillamook.

Todd Perman, who founded JAndy in 2012 after a career in forestry and describes himself as a “first generation oyster farmer,” says his oysters are “harvested by hand – everything we do is on our hands and knees. “.

But the secret, he says, is the bay itself: “Our oysters grow in ocean water; there are no freshwater rivers that flow into Netarts Bay and that makes the water pristine.

This limpid water also gave birth to an artisanal salt company, Jacobsen salt, which advertises itself as “the first company to harvest salt in the Northwest since Lewis & Clark”. Foodies can get a glimpse of Operation Jacobsen by visiting the little blue hut that serves as the company’s retail store; that’s exactly what we did and left with a pot of flaky lemon zest salt and two boxes of salted chocolate toffees to die for.

Shellfish and salt notwithstanding, the scenic loop is more for nature lovers than gourmets. But after our stop in Cape Meares, we shared a delicious dinner in the nearby town of Oceanside at a lively family restaurant, Roseanna’s Cafe, where oysters, clams, and scallops – and Oregon wines – feature prominently on the menu.

By the end of dinner it was dark – far too dark to look through the restaurant windows and see what we knew to be in the ocean: the Three Arch Rocks National Wildlife Refuge. This small collection of rocky islands, established by President Theodore Roosevelt in 1909 at the request of a couple of environmental photographers, provides summer breeding ground for the stellate sea lion, which is listed as an endangered species.

We went down the coast to settle in for the night at the campsite in Cape Lookout State Park, on the same sand spit that winds around Netarts Bay. Oregon has a fabulous state park system, with well-maintained trails and clean, Covid-aware facilities. Cape Lookout, where we stayed for two nights, was no exception. Hot showers were particularly welcome; Carmen the van, we found out, had an outside shower but no hot water and no toilet.

There was a light rain in the morning; the van was equipped with a camping stove, pots, pans and other cooking utensils so we boiled some water to make oatmeal and tea. Our campsite was right next to the small path that led to the beach; after breakfast we walked around there and had the place almost entirely to ourselves. While we were there we could hear the gurgling of the nearby Jackson Creek, important habitat for chinook and coho salmon.

Then we got back to the van, packed a picnic and prepared for the deal of the day: a hike to Cape Lookout.

The Oregon Coastal Trail from the campground to the Cape was closed. So we drove about 10 minutes to the headland trailhead. The hike from there, about five miles to Cape Point and back, is rated as moderate, with an elevation gain of 810 feet. It was also quite muddy and difficult at times, but the breathtaking views of the coast from the heights of the forest were unbeatable.

Cellular service was scarce in the area, so it was difficult to plan on the fly. Luckily while on the trail we ran into a few returning visitors to the area, Jennie Chamberlin and Jess Firestone from Portland, who gave us tips on other places including what to expect on the third cape, Cape Kiwanda, a “sandstone promontory” – a cliff that is constantly eroded and reshaped by the ocean crashing into it.

A steep climb over its dunes offers a spectacular view of the waves crashing into the rocks. But a warning: don’t go past the security fence that runs along the cliff. The cliff can – and has collapsed – under people, sending them to their deaths.

We laid eyes on Cape Kiwanda after our hike to Cape Lookout. Too tired to climb the dunes, we opted for a dinner at the Pelican Brewing CompanyThe nearby Pacific City flagship site touts itself as Oregon’s only “beach-born” craft brewery.

Not to be outdone by Cannon Beach, Pacific City has its own Haystack rock, which at 327 feet above sea level, is Oregon’s tallest. The United States Fish and Wildlife Service says that the two Haystacks are “contemporary (more or less several million years), born of similar volcanic origins”.

Mrs. Firestone and Mrs. Chamberlin also informed us about Short Beach, which is nestled in a cove between Oceanside and Cape Meares, and is known for the nuggets of agate, jasper, quartz and petrified wood that lie beneath its rocks. black and smooth. .

Short Beach is also known as Hundred Step Beach, probably for the wooden steps that visitors have to walk from the main road to get there. There I dug a bit and unearthed a few pieces of agate and other mineral treasures. The sound of the ocean raking the rocks at Short Beach was a clicking noise like I’ve never heard.

But finding the beach was a bit of a challenge. A small sign points to the path down the steps and through a forest to the beach half a mile below. There is no parking, and only a limited number of spaces along the road.

“It’s kind of hidden,” Ms. Chamberlin said, summing up the theme of our trip to Les Trois Caps. “You have to be motivated enough to go there.

Fancy a winter vacation? These are the most popular destinations in Europe