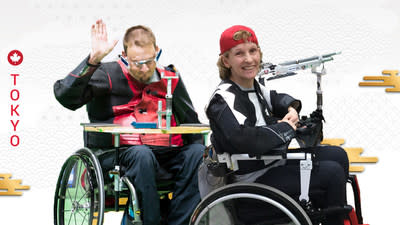 Blessin will become a three-time Paralympian in Tokyo, having also participated in the London 2012 Games and Rio 2016. His best result is the sixth place he won in the SH2 10m air rifle in Rio.

“I can’t wait to have another opportunity to take the Canadian flag to the podium after not reaching my potential in London and finish sixth just off the medals in Rio, ”said Blessin. “I also look forward to expressing my thanks to the Japanese people. As athletes we trained so hard for four to five years for a one hour chance to show the world our best, and I’m grateful to still have this opportunity to do so at the Tokyo Games this summer. “

Tremblay is also set to make his third Paralympic appearance, but his first in the sport of shooting. She has already participated in para archery at Beijing 2008 and London 2012.

“First of all, I would like to thank the team which has accompanied me so generously over the past five years in this enriching adventure in Tokyo Games “, said Tremblay. “I will wear my country’s colors with pride and honor, and while I will do my best to perform well, what is most important to me is to contribute to the next generation and to demonstrate that effort and perseverance can take us far. “

Blessin and Tremblay will both compete in the mixed SH2 10m standing air rifle (August 30), 10m air rifle (September 1st), and 50m rifle-prone events (September 4) in Tokyo. This will be the first competition for the pair since October 2019, when they competed in the Sydney World Cup.

“It is remarkable to see the commitment and focus shown by these two athletes,” said Gale stewart, Head coach of parasportive shooting. “I have high hopes for them as evidenced by their training.”

Para-sport shooting has been part of the Paralympic program since 1976, and the Games feature men’s, women’s and mixed events at distances of 10m, 25m, and 50m. Athletes compete in class SH1 (for athletes with lower limb impairments) or SH2 (for athletes with upper extremity impairments who require the use of a shooting stand to support the rifle, potentially in combination with impairment of the lower limbs).

“Congratulations to Doug and Lyne on each of them being selected to compete in the Paralympic Games for the third time! ” noted Stephanie Dixon, Head of Mission, Tokyo 2020 Canadian Paralympic Team. “Lyne and Doug have worked so hard to be able to continue training under difficult circumstances over the past year and a half. I look forward to seeing them make an exciting return to competition in Tokyo. I wish them good luck! “

The postponed Tokyo The 2020 Paralympic Games will take place August 24 to September 5, 2021 in Japan. Canada expects to send a team of around 130 athletes, and audiences across the country will be able to follow all the action live through coverage from the Canadian Paralympic Media Consortium, including broadcast partners CBC / Radio-Canada , AMI and Sportsnet, and digital partners Twitter, Facebook and MXZN.

About the Canadian Paralympic Committee: Paralympic.ca

About the Shooting Federation Canada: SFC-FTC.ca

100% of COVID-19 patients in intensive care at Hendrick Health are unvaccinated – KTAB – BigCountryHomepage.com

Newsboy’s racing advice for Monday from five meetings, including Ffos Las and…

An online sales tax will further spoil the high street