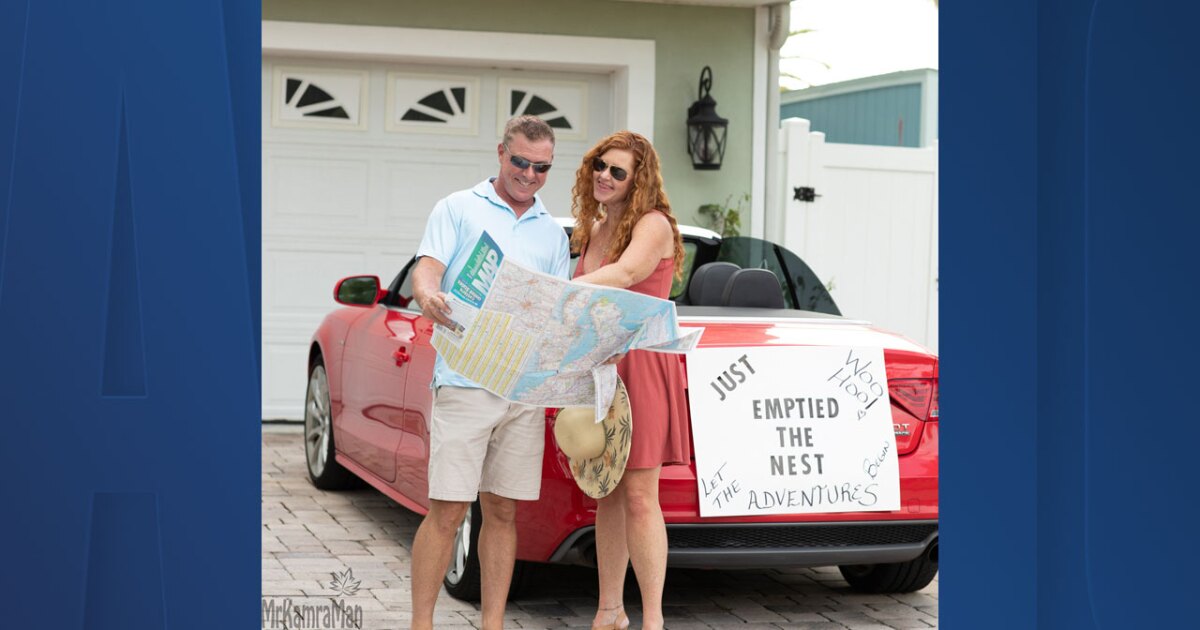 DUNEDIN, Florida – It’s a day some parents look forward to and dread others to send all the kids to college and officially call you ’empty nesters’.

For a Dunedin couple, a photoshoot they organized to celebrate the departure of their two daughters from college turns into a lot of positive traction on social media.

The Lyonnais collaborated with their friend Safety Harbor photographer Kamran Malik, who passes by Mr KamraMan, for a successful fun photo shoot.

Some of the photos feature a playoff of a baby announcement / gender reveal showing the couple as if they weren’t expecting a child, each holding a pink balloon with the names of their college-aged daughters on it.

Others show the couple opening a bottle of champagne to applaud the occasion.

In another set of photos, the couple venture into a red convertible and look at a road map.

To play on the term “empty nesters”, another photo shows the Lyonnais holding an empty nest box.

The Lyonnais are high school lovers. They have been together for 35 years and say they are still laughing!

“Especially now,” Candi said. “The world needs more humor right now. Frankly. We need humor. We need to laugh. If you can’t laugh at yourself, who can you laugh at?”

But what if the girls venture home after graduation? “We told them you are welcome for a visit anytime, just be sure to book your room on airbnb as it’s not your room anymore,” Doug said with a laugh.

What do the couple’s children think about the photoshoot? The two girls had different reactions. Morgan thought it was hilarious and Lauren was kinda ticked off – hoping her dad didn’t turn his room into an office!

The Lyonnais hope their photoshoot will inspire other parents to savor the moment.

“Children are having the adventure of their life, why don’t you have an adventure at the same time? Doug added with a small laugh.

The Lyonnais say the only downside: no longer being able to accuse children of this pile of dirty dishes in the sink.

Malik, aka MrKamraMan, says he’s just happy to have been able to play a part in this fun adventure. “I was an actuary for 25 years and I don’t think I made people smile much, but as a photographer it really brings me happiness and joy that my work will live on people’s walls for the rest. of their life, ”he said. .

Malik has helped a lot of people smile these days, from his free COVID shoots on the porch to free head shots for the unemployed.

“You want to uplift the community. It’s a difficult and unprecedented time these days, so we want to do something to have a little fun, ”added Malik.

As for the Lyonnais, they are impatiently awaiting their new adventures together, this time with much less dirty laundry!