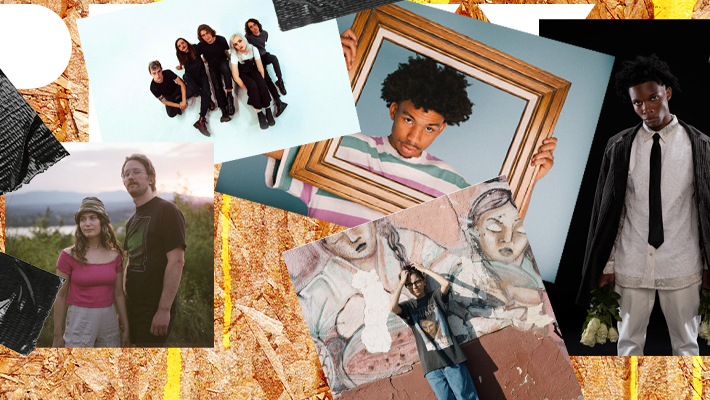 On The Up is Uproxx’s column highlighting five up-and-coming artists each month to put on your radar. October picks have something for every type of mood you might be in. We jump from a rippled SoCal do-it-all producer currently on tour with King Princess, an alt-rock quintet having a massive year, a Gen Zer climbing the Billboard Hot 100, an Oakland rapper with pure vibes but who doesn’t take themselves too seriously, and a New York duo who make incredibly beautiful songs and are about to release their debut album. Check them out:

We’ve been waiting for the announcement of a new St. Panther album or EP to include in an edition of On The Up for a minute. And while that hasn’t happened yet, new music is dropping and we’re just gonna go ahead and give the SoCal-based singer, producer, multi-instrumentalist, and rapper a major boost regardless. Daniela Bojorges-Giraldo’s project St. Panther is signed to Lizzo and Leon Bridges producer Ricky Reed’s Nice Life Recording Company and all the elements for a rapid rise are in order. For starters, the 2020s These days EP is a wonderful exercise in the afternoon mist. You may have heard “Infrastructure” on Insecure and the title track is an undulating companion for daydreams, as the relaxing vocals of St. Panther’s sunshine sit alongside a languid drum and trumpet beat. All of this is a good introduction to its attractive world. Then there are the new tracks, like the wanderlust on the porch deck of “So Bad” and the autofocus of “Greatness.” Saint Panther is currently on tour with King Princess and even featured Terrace Martin and Reed in his locked-out “Real Magic.” The force is strong with this one and it’s cool AF.

The indie rock quintet from Gainesville, Florida has had an eventful 2022. After dipping their toes on the summer festival circuit at Bonnaroo, Lollapalooza and Shaky Knees, Flipturn signed to Dualtone Records for the release of their debut LP, Shadowglow, last August. The album opener “The Fall” hits with thundering drums and a never-ending guitar riff. Singer Dillon Bass’ voice shifts from a high register on “Playground” to a downright soaring staccato on “Halfway.” This is a band that is destined for airplay on alt-rock radio and should most definitely be back on the festival circuit next year. Luckily for you, they are currently on a US headlining tour in support of Shadowglow and you’d be wise to catch them at an intimate location across the country before the stakes are raised.

D4vd is the latest ultra Gen Z riser with a story to boot. The Houston native was doing Fortnite clips (yes, that’s right) to other artists’ music. But when the inevitable takedown notices started rolling in, D4vd decided to create their own music instead. That was last year and now he’s signed with Darkroom/Interscope; a 2022 success story if there ever was one. Her latest single, “Here With Me,” is a love bedroom pop song that evokes colorful butterflies dancing in your belly for that certain someone. “As long as I’m with you, I have a smile on my face,” he sings. Meanwhile, the vulnerable “Romantic Homicide” isn’t quite as sweet on the other hand, but it peaked at No. 34 on the Billboard Hot 100 last week. Clearly, his songwriting resonates.

Oakland rapper Michael Sneed is a 20-something dude trying to make sense of the world around him after returning from college. He’s an instantly endearing presence on “Full Time Job II,” mocking the blockchain with a Baby Keem-like cadence. Then on “Sometimes Blue,” Sneed sounds like Chance The Rapper and Noname on 2013’s “Lost” rolled into one, with bubbly guitar-soaked production from GrandBankss as he spits, “Maybe I’m wiser when I’m desperate and naive when I’m faithful / I dreamed of a perfect ankle and layups against the Lakers / I fell on a desk and was stabbed by staples.

The indie duo from upstate New York make beautiful music that will transport you to the bucolic getaways of the Hudson Valley. Their first album, Light travel time due out October 28 on Double Double Whammy and each single features Maya Bon’s multi-faceted songwriting and lush instrumentals with producer/bandmate Kevin Albert. ‘Often’ is a balm for hard times, something Bon and Albert have been creating a lot over the past year Nastavi, Calliope EP. “I’m On Your Team” is candy for anyone who loves Angel Olsen and “Stand It” has a killer jangle and upbeat beat as Bon is at his best – unwavering and dynamic.