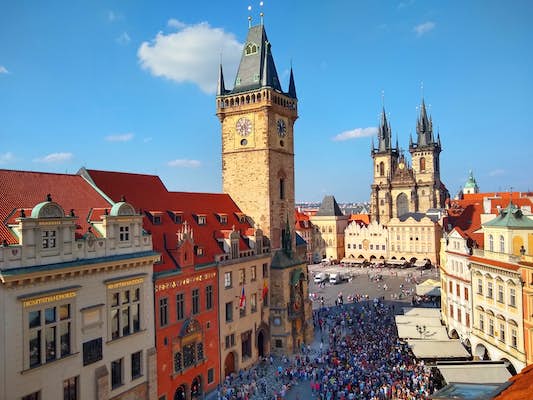 Expense Diary: What I Spent in Two Days in Prague

I went to prague in June before leaving for a short road trip around the Czech Republic. It was the most expensive part of our stay but we could afford to splurge as it was a whirlwind visit. Forty-eight hours was just enough time to see the main sights and sample the nightlife before recuperating for a few days in the peaceful town of Cesky Krumlov(three hours south of Prague) and Kutna Hora (1h30 east of Prague). I booked flights and accommodation well in advance, which left me with an extra crown for Czech beer.

Flights: £93.98 return from London Luton to Prague Václav Havel with Wizz Air. I booked these flights a few months in advance to get the best possible price.

Accommodation: £58.05, which was split between my friend and me for two nights. We lucked out and found a huge room in a shared Airbnb about a 10 minute walk from Charles Bridge in Prague 1 district. On short trips, I prefer to book a private room in an Airbnb rather than an entire property. It’s a fraction of the price, and if you’re anything like me, you’ll be spending most of your time anyway. We have also saved on transport costs; there were cheaper Airbnbs further out of town, but then we had to use public transport.

Car rental: £7.52 per day. We rented a car at the end of our stay in Prague to drive down south to Cesky Krumlov. Public transport options are available, but we opted for the freedom that a rental car provides.

11 p.m.: We landed delayed and stressed at Prague airport by a deluge of messages from our Airbnb host saying we had missed check-in time. Not ideal. We booked an Uber (£6.50 each) at passport control and we were on our way in no time. Public transport would be my usual option (normally cheaper) but we had no time to spare.

Midnight: Luckily we weren’t homeless for the night and arranged to have the room key left in a newsstand under the Airbnb. We picked up snacks with the key to tide us over until morning. The last thing I ate was an overpriced sandwich at Luton Airport, so I hastily grabbed a selection of crisps, nuts, chocolate and two beers without checking the prices (it’s were actually the cheapest items to £1.50 each) to have in our room. I thoughtlessly tapped my Monzo card to pay and it wasn’t until I opened my app later that I realized I had been charged £24! I thought it must be a mistake and ran downstairs to a puzzled shopkeeper who explained to me that nuts and Pringles really cost the same. £5 each. The worst part? We don’t even have like their. I’m glad I learned that lesson early on. Every cloud.

11 a.m.: After a well deserved sleep in, we spotted a nearby breakfast place for coffee. Ignoring the tourist traps on the bank of the Vltava River, we chose a small cafe on a side street called SmetanaQ. There was an extensive breakfast menu and a quiet terrace to enjoy the morning sun. I have a flat white (£3) with avocado and poached eggs on sourdough bread (£5.45).

1 p.m.: The next few hours were spent walking after our breakfast and dodging the crowds on the Charles Bridge. I was a little disappointed with the attendance at the bridge; I just wanted to cross it and escape the crowds. We rode the funicular to Petrin Hill (£0.90 for a single). Disclaimer: This price could be totally wrong. I panicked at the machine and pressed the first button I saw. I was reluctant to queue as you could walk to the top but my friend persuaded me it would be fun – and it was! The incredible architecture of the city slowly came into view as the funicular climbed higher. At the top we were treated to a spectacular rose garden and shady woodland walks to prague castle.

3 p.m.: We had been in Prague too long not to have tasted the local beer yet, so we stopped at a small bar dubbed an “alchemical lab pub” called Kellyxír. It was tucked away in a quiet courtyard and served steaming cocktails. It was a little early for a chemistry experiment and we stuck to the local beer (£1.57 for a big one). When beer is so cheap, it would be rude not to, wouldn’t it?

5 p.m.: Amid the excitement of the cable cars and the beer, we forgot to have lunch and opted for an early dinner instead. We found a beautiful spot overlooking Slovanský ostrov (one of the small islands on the Vltava river) and ate on the roof terrace of Art Cafe Manes. The excellent food was cooked on large grills near the tables. I had a veggie burger (£9.60), a White Russian (£4), and a small beer (£1.72) for dessert.

6 p.m.: It’s time to burn the burger with a self-driving paddle boat river cruise (£3.50 each for one hour). The scale of the river makes it feel more like a lake – it’s a popular place to relax by (or on) the water. Floating bars add to the relaxed and fun atmosphere. This was one of the highlights of my time in Prague – it’s such a great way to see the city from a new perspective and get up close to Charles Bridge without the crowds.

7 p.m.: Then we made the short jump across the bridge to Prague Beer Museum. We lucked out with a table outside and sat for hours watching the crowds go by until well after sunset. Although very touristy, it has 30 beers on tap and is a great place to sample Czech beer from different regions. I ordered the ‘Hop Lovers’ tasting flight (£7), a ‘Mix Number One’ (£6.30) and a ‘Flying Cloud IPA’ (£3.30). Full disclosure – the rest of the night is a bit hazy.

10 p.m.: In the bar next door whose name escapes me (see above…) we made friends with two generous Irish tourists who each handed us a Jager Bomb (£0). It was probably the last thing I needed, but at this point I was in party mode on our night out.

1h: We made more friends – this time locals – who took us under their wing and introduced us to their favorite basement bar: Rock Cafe. We used a free app called “Bar Box” to DJ for the night on the jukebox. The details aren’t clear at best, but we’ve come in with £28 worth of Czech crowns and left with nothing. I am reliably informed that we bought shots for each member of staff behind the bar (who were very friendly) as well as many beers for ourselves. I guess in this case it’s safe to assume that I spent £14 which doesn’t seem too bad, considering.

2h: KFC isn’t my usual kitchen when I’m on vacation (especially as a pescatarian), but on a nighttime food hunt I stuck to fries and onion rings (£3.50). A little soaking was definitely a sensible idea and something I was grateful for the next morning.

Noon: Feeling fragile, we left our Airbnb and walked a few meters to the nearest cafe for coffee and a croissant (£3).

2 p.m.: It’s time for the road trip! We had a few hours to kill until we picked up our rental car and headed to Cesky Krumlov. We have an Uber (£2.50 each) at Prague train station as the temperature was a bit high for a hangover walk.

3 p.m.: Lunch today was an unglamorous panini (£4.30) which was consumed on the marble steps of the Prague train station while suffering from a hangover.

Note: This was a quick visit to Prague before we embarked on a long road trip across the country. For a cheaper and quieter alternative to Prague, I would recommend Kutna Hora. It is about an hour by train from Prague and has exceptional architecture, including the Sedlec Ossuary (church of bones) and St. Barbara Cathedral.

Get more travel inspiration, tips and exclusive deals straight to your inbox with our weekly newsletter. Make sure you’re ready for anything with travel insurance from our trusted partners.
Share FacebookTwitterGoogle+ReddItWhatsAppPinterestEmail

Airbnb cooperates with the European Commission on consumer offers