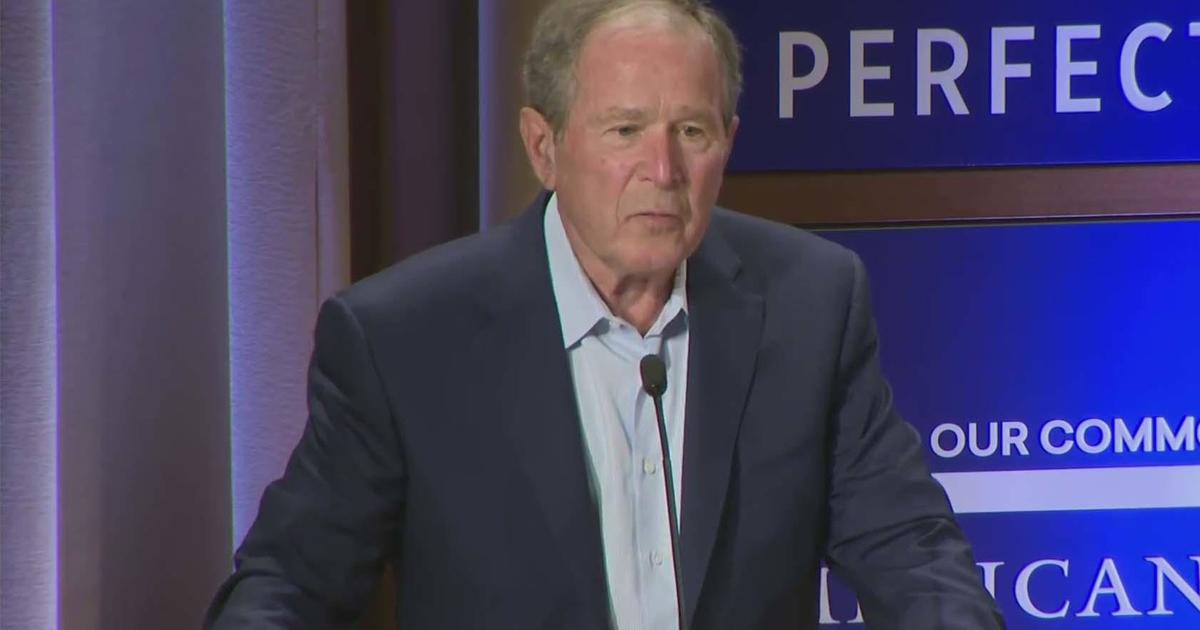 “The interesting thing about elections and democracy is that they allow our democracy to heal.”

He made his remarks as part of a four-hour long talk titled “Elections – A More Perfect Union” at his Presidential Center at SMU in Dallas on Wednesday afternoon.

The former president acknowledged people’s lack of confidence in our electoral system at the moment, but said it was working.

“The truth is that our system works quite well. We have a large, complicated country with a variety of interests and states and yet we have had elections for some time.”

The George W. Bush Institute participated in a polling project five years ago and found that nearly seven in ten Americans think our democracy is weaker, and institute leaders said they want change that and build confidence in our electoral system.

During the event, Republican Chairman of the Maricopa County Board of Supervisors in Phoenix Bill Gates and New Mexico Secretary of State Maggie Oliver said during a panel discussion that election administrators faced increasing threats.

Gates said he and his family were to stay away from home on January 6 last year. “We spent the evening at an Airbnb in Scottsdale because that’s what we were advised to do. There was a guillotine set up outside the Arizona capital for the board of supervisors.”

Oliver said: “I spent all of the Christmas holidays between Thanksgiving and January 6, basically 2020-2021, somewhere other than my home in Santa Fe because I was doxed. My photo was put on a website with a target on my face.”

Former President Bush did not mention the attack on the US Capitol on January 6 nor did former President Donald Trump claim there was widespread voter fraud, despite strong denials from election officials and a lack of of evidence.

Bush said elections provide legitimacy to elected officials and a peaceful transfer of power, and he quoted former President Abraham Lincoln. “The ballot is stronger than the bullet. Pretty relevant these days. I hear a lot about the political environment today. Lots of angst all over the country, people are really worried, they don’t like anger, they don’t like pointing fingers, they expect better, and if you have a problem with that, the main thing is to vote.

Condoleezza Rice, former secretary of state and national security adviser to former President Bush, also spoke at the event. “Elections are the only way for the people to have a voice. Every time I hear ‘Well, elections don’t equal democracy, I say that’s absolutely true, but without elections, you can’t have a democracy. So I think we have to recognize that what we’re doing with elections is giving people a voice. »

At the conference, Gates said there is no systemic fraud, but individual cases of voter fraud that are being prosecuted.

George W. Bush Presidential Center Chairman Ken Hersh said it was important to support the nation’s institutions, including the electoral system. “We must not storm them, or attempt to tear them down. Our institutions have survived for nearly 250 years despite the ebbs and flows of public opinion. Our founders crafted a living framework capable of change, of s ‘adapt and heal.’

Holly Kuzmich, Executive Director of the George W. Bush Institute, said, “We think it’s important to talk about these issues and discuss how we can strengthen the integrity of our elections across the country. .

Bush Institute leaders said they believe what will build confidence in the electoral system is if more people get involved and participate in the process.

The Institute sponsored the event with the Partnership for American Democracy, the Corporation for Public Broadcasting, the American Academy of Arts and Sciences and the Karsh Institute of Democracy at the University of Virginia.

Jack covers politics for KTVT-TV CBS 11 and has worked for the station since September 2003.

NYC has more Airbnb and VRBO rentals than apartments