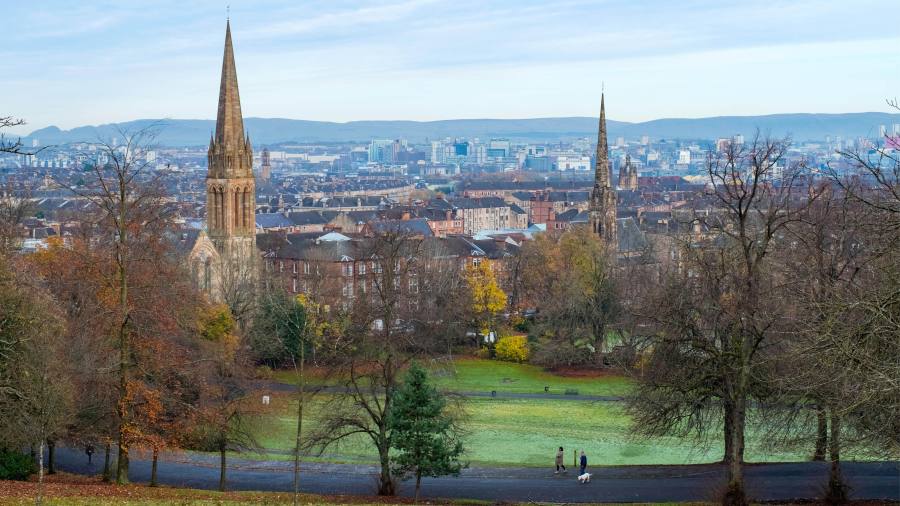 Sabrina Magnusson loves living in Glasgow’s increasingly fashionable Southside, but knows she won’t be able to afford to buy a house there. She rents a two-bedroom apartment with her partner while saving to buy. “Real estate prices have skyrocketed since the start of the pandemic and we will have to move to a more affordable neighborhood like Paisley,” said the 25-year-old, who works in the media.

She has also noticed a sharp increase in rental prices, she says. As the city prepares to host the United Nations climate change conference, which begins next weekend, some owners have kept properties off the market to make them available for lucrative three-week Airbnb rentals – while Glasgow students are back in droves, adding to the backlog of demand. “As COP26 approached, I saw rents double for properties like ours because there is such a housing shortage,” explains Magnusson.

But house prices in Glasgow have been steadily rising since 2013 – the pandemic has only made things worse. In the year through August, according to the latest data available from Scotland’s records, there were 13,852 sales in the city, compared to a 10-year annual average for that period of 10,696. The price average in Glasgow in the 12 months to August was £ 182,728, up 14% from the same period in 2018/19.

The increase is due to activity in the upper end of the market, says Faisal Choudhry, head of research in Scotland for real estate agency Savills. Over the past decade, on average, there have been 311 Glasgow property sales per year above £ 400,000; in the 12 months leading up to August, there were 738.

For properties over £ 1million, an average of nine transactions rose to 32 over the same period. “Sales at £ 2million and £ 3million were mostly limited to Edinburgh before the pandemic,” said Cameron Ewer, director of Savills in Scotland. “We have sold five homes over £ 2million in Glasgow since the market reopened in July 2020.”

Most of the sales over £ 1million were made in Glasgow’s West End, the main residential area home to the 85-acre Kelvingrove Park, the Botanic Gardens, the University of Glasgow and several independent schools.

In the G12 postcode that makes up a big chunk of it – Kelvinside, Hyndland, Dowanhill and Kelvinbridge – the average price of £ 346,946 is 90% higher than the city average. “Recently a six bedroom house in Kelvinside with a home report [valuation] to £ 1.2million went to over £ 1.4million, with several buyers [competing], a mix of local and out of town, ”says Maitland Walker, Managing Partner at Rettie & Co, an agency.

Even apartments sold well, with 4,617 deals in the first six months of 2021, up from 3,729 in the first six months of 2019, with an average sales value jumping 18% during that period to 162 £ 491. “Here, even during Covid, not everyone wants outdoor space or a garden,” says Fergus Lindsay of real estate agency Slater Hogg & Howison: “In July, the average [temperature] is only 15C. The main trend has been for people to switch – to larger apartments or houses – rather than out of town, he adds.

Steven Carmichael, who works in golf, has moved into a three-bedroom apartment in Dowanhill in a house in the town of Helensburgh on the River Clyde. “I just wanted everything to be on my doorstep,” he said. “The Cafes of Byres Road, Glasgow Film Theater [an independent], art galleries, botanical gardens.

Even during Covid, not everyone wants outdoor space. In July, the average [temperature] is only 15C

Rather than detached houses, the four story red sandstone terraced Victorian townhouses with five or six bedrooms are typical of the West End – costing £ 1.1million to £ 1.5million, with conversions from one-bedroom apartments around £ 250,000, two-bedroom apartments around £ 300,000- £ 450,000. Jordanhill (G13) is also part of the West End, where four-bedroom townhouses in the catchment area of ​​the state-funded Jordanhill School cost around £ 550,000.

Then there’s the Park district (G3), where Georgian terraced townhouses have started to approach £ 2million. Catherine has just bought a one-bedroom apartment in Park Quadrant, the new build to restore one of the original Georgian terraces, where prices started at £ 299,000, moving from North Lanarkshire to the town. “I’ve always loved the city’s creative buzz, and with all the students, the feeling that anything goes, the neighborhood feels very Glasgow mixed in with London,” says the actress, who prefers not to give her full name .

The Scottish Stamp Duty holiday on homes under £ 250,000 – which ended in March 2021 – helped boost the market after the foreclosure, as well as incentives for first-time buyers, including First Home Fund, a government equity investment scheme offering loans of £ 25,000, now also closed.

These buyers are re-examining some areas which are regenerating and providing better value, agents said. The hottest place to live in recent years has been Finnieston, north of the SEC Center and OVO Hydro event venues, but prices have risen dramatically in recent years, since trendy bars sprouted among traditional lodgings – from nowadays two-bedroom apartments cost around £ 200,000 to £ 270,000.

Shoppers who can’t afford Finnieston are now turning to Dennistoun in the East End – home to traditional apartments and pubs and, more recently, craft beer shops and cafes – says Carole Mackie of the team at Savills development: “You can buy two-bedroom apartments for around £ 180,000. “

The focus has also shifted to the River Clyde – to the south side – where the redevelopment of the former Glasgow Garden Festival site includes Prince’s Quay, with homes starting at £ 239.9995. Mackie says the buyers include workers moving to the new Barclays Glasgow campus in Buchanan Wharf, where the company aims to create 5,000 new jobs by 2023, and JPMorgan Chase, which is expanding its offices.

Pollokshields, Strathbungo and the booming Newlands are also popular right now, but it was the wide avenues of sandstone apartment buildings and new little shops that drew Magnusson to the Southside. “It feels a lot more ‘local’ than the West End,” she says.

Yet while she bemoans rising prices, the city’s improvement is fragmentary, she says, a reference to its eight Transformational Regeneration Zones (TRA) – where the city council seeks to regenerate housing – as well as ‘the fact that Glasgow has the second-highest rate of drug-related deaths in Scotland. She adds: “Deprived areas need long-term solutions to poverty and the drug problem, rather than just temporarily relocating the homeless from the streets around the venue of COP26. “

A three bedroom apartment in Glasgow’s West End. The property, which measures 1464 m², is on the second floor of a terrace and has a bathroom, a reception room and a separate kitchen. There is also a communal garden at the rear. Available with Rettie & Cie.

A boutique guesthouse occupying the ground floor and basements of a building near Kelvingrove Park. The property, which measures 4,772 sq. Ft., Could be transformed into a large family home. Available via Savills.

A five bedroom mid-Victorian townhouse on Athole Gardens. The property, which measures 5,331 square feet, has two full bathrooms, a library, a gym and a private south-facing garden. The house is arranged over five floors. Available in real estate agency Savills.