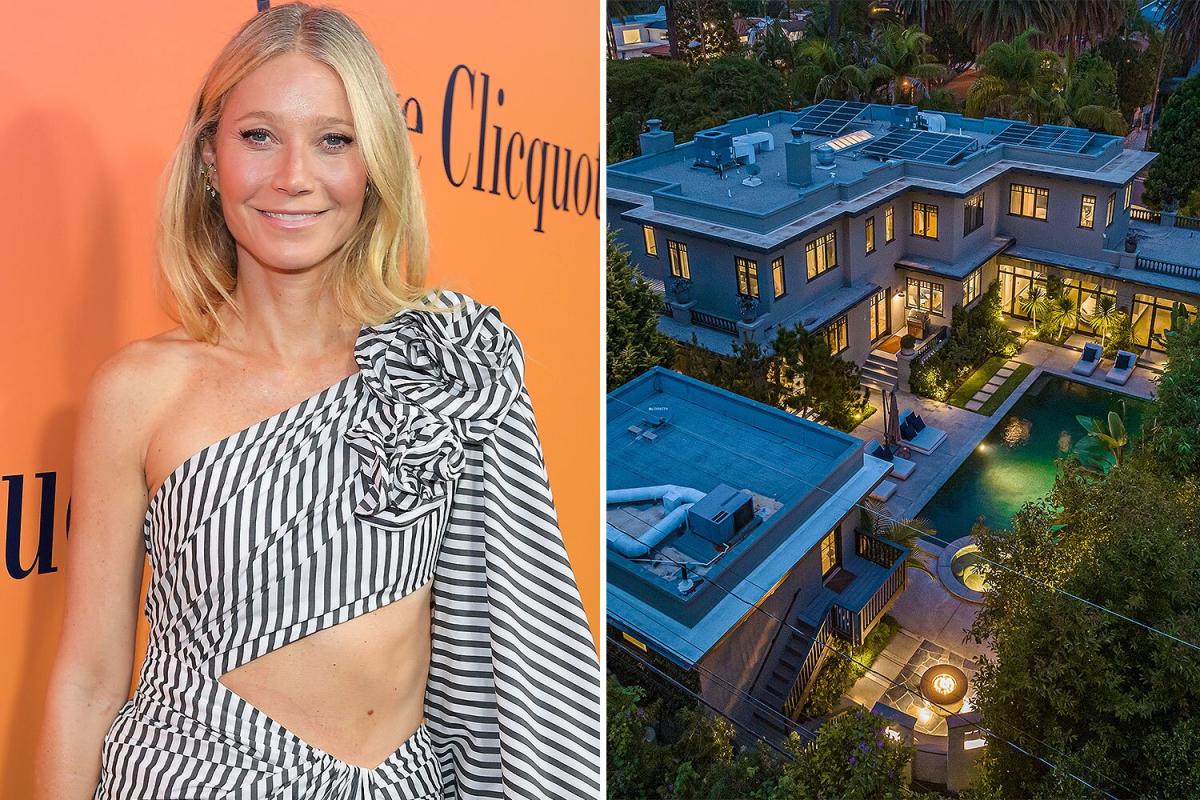 Gwyneth Paltrow’s childhood home has hit the market for $17.5 million—see inside!

by Gwyneth Paltrow childhood home in Santa Monica, CA is on the market!

Bruce Paltrow and Blythe Danner first bought the house in 1976 and it was later acquired by Jerome Dahanfounder of jeans brand Citizens of Humanity and 7 for All Mankind, in 2008. It is currently listed for sale for $17.5 million with Robert Lawrence Edie of Compass.

The nearly 7,000 square foot home, built in 1913, sits on an impressive double lot of just under half an acre and has six bedrooms and seven and a half bathrooms.

The exterior is a tropical oasis with lush landscaping and lighting that was added after extensive renovations. Guests will find a garden with a fire pit, a Balinese-inspired pool and spa, and multiple outdoor seating areas tucked behind the mature hedges and tall gates that surround the property. The property also has a two-story guest house with a gym, dry sauna, bedroom and office.

A striking glazed entrance leads inside the house, which includes a renovated living room with a fireplace. Her kitchen has a marble island, Wolf and Sub-Zero appliances and an integrated dining area. The ground floor also houses a home theater and a guest bedroom.

Upstairs there is an office and three en-suite bedrooms, including the intimate master suite with two bathrooms and dressing rooms.

“In a market of overbuilt mansions that are undeniably starting to look and sound alike, 2020 Georgina rises above the competition by delivering a bespoke and meticulously crafted experience unlike anything I’ve seen in Santa Monica. “Edie said in a statement.

Paltrow gave Goop readers a glimpse of her current home in Montecito, which she calls his “forever home”, in July.

The 49-year-old actress and businesswoman has teamed up with architects and interior designers Robin Standefer and Stephen Alesch, as well as designer Bridgette Romanek, to build her perfect family retreat, which combines old-world details and elegant modernism.

She currently lives there with husband Brad Falchuck, 51, and children Apple, 18, and Moses, 16, whom she shares with ex Chris Martin.

Is ‘Barbarian’ streaming on HBO Max or Netflix? How to watch the Barbarian