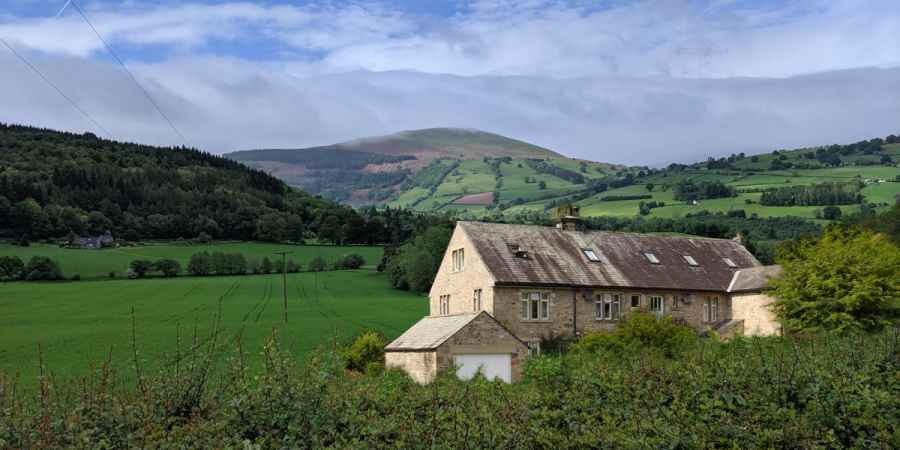 Heol Fanog is a farmhouse in the Welsh countryside which, for six years from 1989, was the epicenter of a disturbing haunting and suffered more exorcisms than any other in British history, resulting in the house to be nicknamed “Hellfire Farm”.

The remote Brecon Beacons farmhouse was built in the 1950s in an area said to have a history of witchcraft. It was Bill and Liz Rich’s house.

Liz was pregnant with her first child when she moved into the idyllic hillside farmhouse in 1989 with husband Bill and teenage son Laurence from a previous relationship. For starters, the secluded farmhouse on the edge of the Brecon Beacons National Park seemed like the perfect home for the couple. It was the perfect setting to raise a family and Bill, who was a successful artist, had room for a studio and all the inspiration he needed from the Welsh countryside.

A few weeks after moving into the farm, the disturbing activity began. The first incident happened shortly after the birth of their baby, Ben. Liz got up to feed Ben in the night and Bill who was now awake came downstairs to use the bathroom. Downstairs, he heard heavy footsteps coming from above him, despite the fact that Liz hadn’t moved.

The next clue that something was wrong with the farm was the exorbitant electricity bill that arrived. They were being charged much more for electricity than they had ever been in their previous home and no matter what they tried, they couldn’t reduce their skyrocketing electricity bills. After working with their energy provider to rule out rational causes, such as power outages, they concluded that their high energy usage was due to unexplained power surges. They believed the epicenter of this energy leak was in the barn, where Liz had seen blue and white laser-like flashes.

Over the next year, Liz and Bill welcome their second child together, Rebecca, into their home as paranormal activity continues to escalate. Occurrences included objects moving around the house, farm animals mysteriously dying, unexplained putrid smells, doors slamming in empty rooms, and sudden temperature drops. The family also reported hearing banging and banging throughout the house, as well as what they described as loud snoring.

Bill, who apparently had an interest in the unexplained before the case, seemed to be most affected by the haunting. His art, whose sales were dwindling, began to become much darker and sinister. He began to spend more and more time alone in his studio painting obsessively. Later, Bill scrawled strange symbols on the walls around the house and frequently entered trance states.

Perhaps most disturbing of all were the apparitions that Liz, Bill and the children reported witnessing. These included dark, gloomy figures, a hooded figure seen standing at the foot of their beds, an injured man who appeared to have been involved in an accident, and an old woman with a hooked nose, whom Liz later identified in a photo. as the owner’s mother who died in the property.

There was also said to be the ghost of a beautiful woman who was constantly trying to seduce Bill. Could it be a succubus, a female demon said to seduce men through sexual activity? There were other claims that demons were at work on the farm, including those made by a local Baptist minister, who was convinced the family was being stalked by a demon.

With so much negative activity in the house over a six-year period, you might be wondering why the family didn’t just move out. Well, at the time, the UK was going through a recession and one of the worst real estate crises in the country’s history. This made it impossible for the Rich family to leave the house. They had no choice but to stay and try to get by. They brought in a local priest and a team of parapsychologists. It was thanks to an exorcism by Eddie Burks that the haunting ended. He concluded that their home had a “pre-Christian presence” lurking there. He tried to move this presence, which seems to have worked and the activity died out.

Soon after, the family finally left the farm, but Liz and Bill’s marriage didn’t survive the test and they divorced soon after. Bill died a few years later.

Please note that this building is a private residence, the privacy of the current owner must be respected. The photo included on this page is for illustrative purposes only and is not an accurate representation of the location or the actual property.