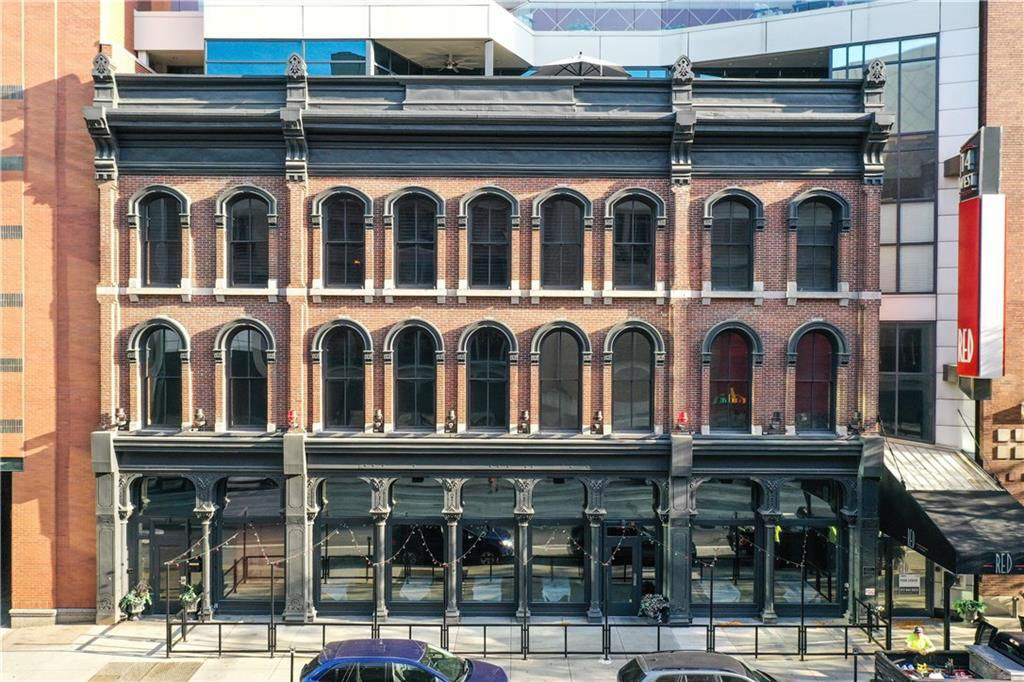 Historic downtown building with steakhouse area, luxury condo on the market for $ 4.95 million

A 145-year-old building near the Circle Center shopping mall in downtown Indianapolis is on sale again, this time with an asking price of $ 4.95 million for vacant restaurant space on its first two levels and a huge condominium at the top with a roof terrace.

The former Red the Steakhouse building at 14 W. Maryland St. was put on the market last month, after repeated unsuccessful efforts by building and condo owner Jeff Laskowski to lease the 10,600 square foot restaurant to a new user and a previous unsuccessful attempt to unload the living space.

“He loves working on projects, and he’s done with this project and he wants to move on,” said Robert Lather, a residential broker with the Robert John Realty Group at Century 21 Scheetz. He is one of the two main brokers in the property.

Lather represents the condominium space, while C21 Commercial Scheetz management broker, Tommy Kiritsis, is in charge of the commercial side.

Kiritsis said the space “is perfectly suited for another high-end restaurant” like Red, which closed in late 2018 amid the bankruptcy of its parent company.

In fact, Eddie Merlot’s, an upscale Fort Wayne-based steakhouse chain, signed a lease to move into space in 2019, but those plans were ultimately derailed by the coronavirus pandemic.

The building was constructed in 1876 and has been known as Elliott’s Block for many years. It was a warehouse annex for LS Ayres Co. before it was used by Indiana News Co. It was converted from office use to retail and residential space during a renovation of 1999 that converted it into an upscale restaurant known as Malibu in Maryland, with upstairs hotel suites on the third floor. A fourth level has been added as a penthouse with a roof terrace.

Local investor Richard Coombes, who led the redesign, sold it to Carter M. Fortune. The local businessman and philanthropist died at the age of 70 in August 2012. Fortune was president of Fortune Industries, a publicly traded company, before undergoing a restructuring.

Laskowski, the former CEO of west-side portable sawmill maker Wood-Mizer Products Inc., purchased the four-story structure from a Fortune family trust for around $ 3 million in early 2014. He renovated the top floor and part of the third floor. floor in a residence for himself, but later decided he didn’t need as much space.

The condo features four bedrooms, four full baths, and three half baths, as well as a theater, library, and rooftop terrace. Laskowski also entered into an agreement with Simon Property Group for direct access to the Circle Center and a closed garage for three cars inside the mall’s existing parking garage.

While two of the building’s four third-floor suites have been removed to make way for the Laskowski condo expansion, the other two have their own kitchens, living areas, and washers and dryers. They also feature exposed brickwork and wooden beams to give the spaces a more industrial feel.

The owner told IBJ in 2017 that he spent around $ 2 million on all renovations to the property.

Lather said Laskowski “is in no real rush” to sell the building. He does not occupy the condominium himself, but rather seeks someone who can make proper use of the property.

“We’re just looking to see if there’s the right buyer out there,” Lather said. “We certainly had a lot of interest in the property. It’s just trying to bring in someone with a unique vision and see the potential behind them.

Kiritsis said he believed the building would “demand a high price,” but did not explicitly say whether he expected the bids to meet the asking price. He pointed out that the building’s proximity to various downtown amenities and the fact that it includes a restaurant, condo, and smaller apartment-style units make it an attractive building for a variety of users.

The current asking price is actually over $ 1 million lower than what Laskowski was looking for when he first listed it, asking for $ 5.99 million in 2017 just for the condominium space.

Kiritsis said several potential buyers, ranging from developers to contractors, have expressed interest in the property, with a few offers already submitted. There is no set date by which brokers will stop accepting offers for the property.

Some of the proposed uses included transforming condos and apartments into Airbnbs or converting the building into some sort of small boutique hotel or other hospitality use.

Bill French, a retail broker at the Chicago-based Indianapolis office of Cushman & Wakefield, said he was optimistic the building would be sold as soon as possible. He also said any restaurant there will likely have to be upscale.

“It really is a unique place and needs a special restaurant,” he said. “It will probably be a ‘white slick’ or a high end operation.”

He said he was unsure who would be most interested in purchasing the property, whether it was an individual who owned and operated a restaurant and lived above it, or an owner who lived in the above and would rent the space to another user.

Either way, he said, a buyer would have to be well capitalized to have long term success with a building that includes a restaurant.

There have been some positive moves for the mall lately. Burn by Rocky Patel cigar bar opened last year on the southwest corner of Maryland and Meridian streets. And Sugar Factory, another restaurant concept, will open at the end of 2021 in the former Palomino space. in the streets of Maryland and Illinois. Additionally, CoHatch, a collaborative working collective based in Columbus, Ohio, is slated to open an outpost at the Circle Center this summer.

But the mall also recently transferred management functions to JLL, after more than 20 years of direct supervision by Simon Property Group. It is not yet clear what this will mean for the future of the mall. Simon still oversees the retail leasing of the property, although CBRE has the lease to market the vacant second and third floor spaces in the former Carson building for office users.

“I think what’s going on with the mall is probably having the biggest impact on the viability of this building,” Tikijian said. “And who knows how long it will take before we know what’s going to happen over there over time?”