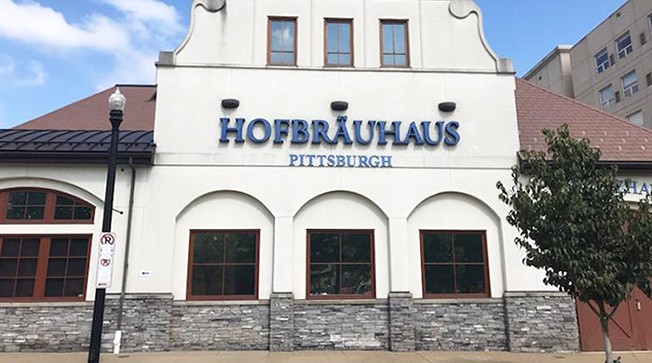 Hofbräuhaus Pittsburgh on the south side

In her messages, Bracey said that Hofbräuhaus Pittsburgh general manager Vincent Quinzio had filed several complaints about the music performed at the festival, despite the event having a permit, and allegedly qualified the artists and staff at Hearcorp. racist insults.

“Vincent has filed several complaints regarding the music, despite the fact that we have a license and have given sufficient notice,” Bracey said in a statement. social media posting. “At one point he came out and exploded in a fit of rage, unleashing racial slurs against the performers and staff at Hearcorp.”

Bracey added that they had faced “inexplicable feeding issues” on their stage throughout the day, noting that the festival breaker resided in the Hofbräuhaus Pittsburgh restaurant.

In an email sent to Pittsburgh City Paper On September 15, the Hofbräuhaus Pittsburgh property said it was investigating the allegations and asked people to provide more information by sending a message to their Facebook page.

“As owners of Hofbräuhaus Pittsburgh, we celebrate all facets of diversity, equity and inclusion for our clients, our staff, our global operations, our SouthSide Works neighbors and the greater Pittsburgh community.” , the owners said in the statement. “We take all complaints seriously and are currently investigating those specific to last weekend’s Barrel and Flow Fest.”

Hofbräuhaus of America said City paper in an e-mail of September 17 that Hofbräuhaus Pittsburgh is a franchise.

Bracey said in his social media posts that he invited the Hofbräuhaus Pittsburgh to participate in the festival and warned them in advance. Still, he said they refused, then complained that the festival was too loud, and called the cops with a complaint.

According to social media posts, this was not the first SouthSide Works event to receive noise complaints from Hofbräuhaus Pittsburgh. Creatives Drink co-founder Cody Baker alleged on social media that Hofbräuhaus had previously complained about noise about a yoga event during Made in Pgh’s Summer Fitness series. Another person supported the allegation, commenting on Bracey’s comments Facebook post about the event, writing that Made In PGH was “forced to turn off the music” and the instructor’s microphone, which interrupted the course.

But the allegations of racism at the Barrel & Flow festival involve more than one case. Buzzy Torek, a local Podcast producer who helped produce Barrel & Flow Fest said City paper that he met Quinzio during the festival. Torek said Quinzio would not let people who attended the festival use the toilets at the Hofbräuhaus Pittsburgh. But, Torek said he saw Quinzio allow white guests inside the restaurant.

“After puffing up my chest earlier in the day yelling at musicians and women during a soundcheck on towing cars, the conversation I was asked to have [Quinzio] was just exhausting, ”Torek said. “He told me that he didn’t let anyone drink with a bracelet, but my white friends didn’t seem to have a problem doing so.”

Torek added that he also spoke to many close friends who also said he had encounters with Quinzio who were racist.

“It was more than clear that he did not value people of any race because he was incredibly disrespectful and hateful towards my white colleagues. I couldn’t imagine how it is for black people, ”Torek said.

This story was updated on Friday September 17th with an additional statement from Hofbräuhaus of America.
Share FacebookTwitterGoogle+ReddItWhatsAppPinterestEmail