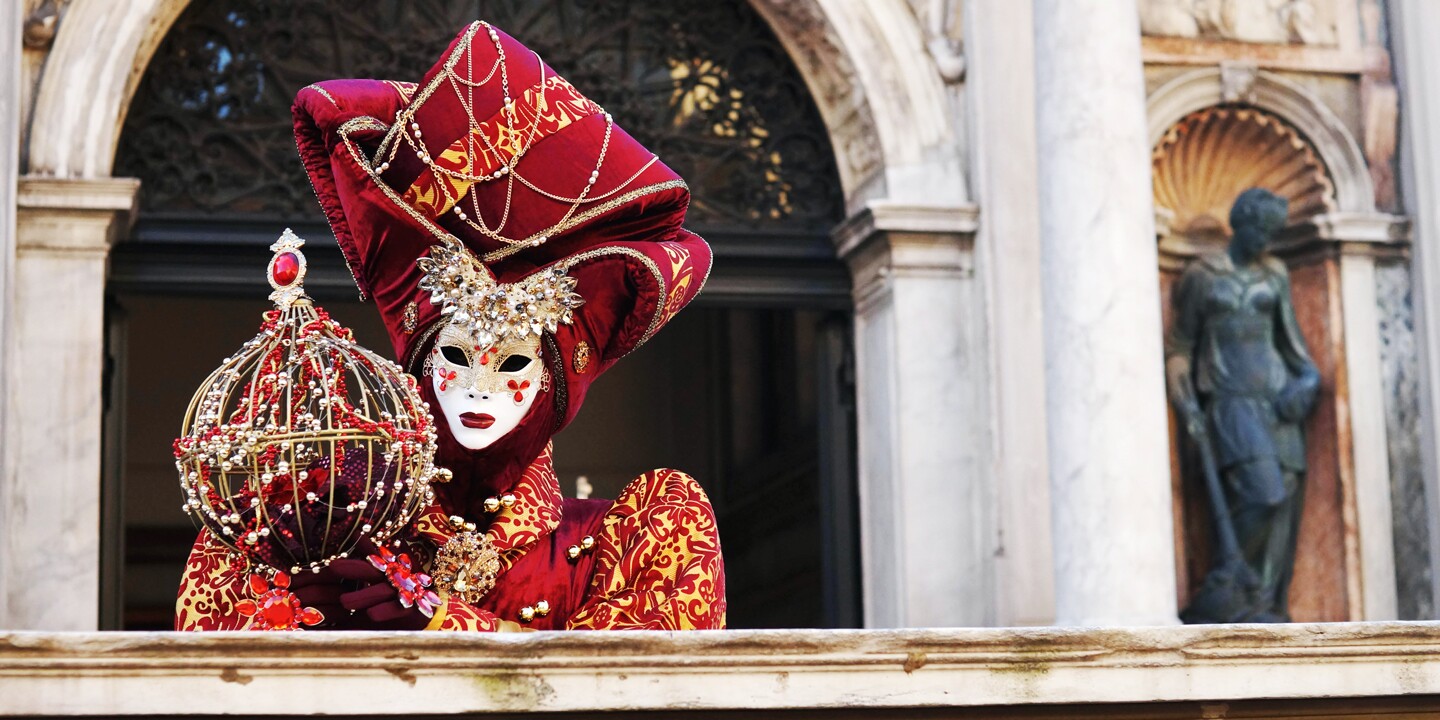 How to Attend Carnival in Venice, Italy

Each year, up to 3 million people descend on Venice participate in the festivities surrounding the Carnival (Carnevale in Italian). And although Carnival, also known as Mardi Grasis celebrated around the world, it has a flavor unique to Venice, transporting participants back in time to the 1700s.

In 2020, as the COVID-19 pandemic began to spread across northern Italy, Venice Carnival has been cancelled. In 2021, it was virtual. The festivities returned in 2022 and will be back in full force in 2023, although details are still being finalized. Whether you’re planning a trip to Venice to experience this magical party or just dreaming about it, here’s everything you need to know about Carnival in Venice.

The origins of the Venice Carnival

The exact origins of the Venice Carnival are unknown, but what is certain is that the tradition has existed for at least a millennium. The first recorded mention of the Carnival dates back to 1092, but it was not until 1296 that the senate of the Venetian Republic declared it a public holiday. Although Carnival is widely accepted as a Christian holiday preceding Lent, some scholars believe its roots can be traced back to the pagan traditions of ancient Rome.

“The Venice Carnival was initially a way for the plebs to let off steam,” explains Fulvio De Bonis, co-founder of the luxury tour operator. Imago Tourist attractions, which participated in the Venice Carnival and organizes exclusive experiences at the festival for its customers. “It was the feast that let the commoners rise and allowed the patricians to descend to the level of the plebeians, so it was a leveling of social classes.”

When Napoleon conquered Venice in 1797, he abolished the carnival in order to prevent rebellions. It took nearly 200 years to bring it back.

The Venice Carnival begins on February 4, 2023 and culminates on Shrove Tuesday, which falls on February 21, 2023.

How long does it last?

It is marked by several major parades and events, starting with the Festa sull’Acqua (Party on the Water), in which a parade of richly decorated boats will descend the Canareggio Canal after dark. The next big parade will be the Feast of Mary, which sees 12 beautiful women in period dress parade from St. Peter’s Basilica to St. Mark’s Square. This tradition dates back to the 9th century, when the wealthiest families in Venice offered beautiful clothes, jewelry and a bridal dowry to 12 beautiful but poor young Venetians. Of the 12 Maries, one is selected as the winner who descends from the bell tower of St. Mark’s Basilica for an event called Volo dell’Angelo (Flight of the Angel).

How to attend the Carnival of Venice

Besides the big public events, there are dozens of concerts, parties and lavish masked balls in the city’s most lavish palaces. “The most important thing is Balloon of the Doge hosted by Antonia Sautter,” says De Bonis, comparing the mood to Eyes wide closed without naked women. “Everyone wants to enter this ball. It’s the event of the year. It is very difficult to get tickets.

The best way to discover and enter the most exclusive balls is through a tour operator like Imago Artis or your hotels concierge. “In order to maintain a sense of tranquility for our guests, we do not host parties at the hotel, but I am personally available, along with our concierge team, to advise guests on the best balls and parties in town” , says Paolo Lorenzoni, Managing Director of the Gritti Palace, a Luxury Collection hoteladding that guests will be able to sample traditional Carnival sweets prepared by the hotel’s pastry chef.

In addition to having the right connections, you’ll need deep pockets to get into the most exclusive balls, which can cost up to $800 to attend, not to mention the cost of a costume rental, which can also cost hundreds or even thousands of dollars.

What to wear for Carnival

You will definitely see people wearing normal clothes in public parades, but part of the fun of carnival is dressing up in 18th century costumes and beautiful masks. People really like to pull out all the stops, donning spectacular ball gowns or costumes adorned with feathers, beads and trimmings, made of plush fabrics like velvet or satin.

“The whole city turns into an open-air theater and there are experiences, like enjoying hot chocolate at Caffè Florian in Piazza San Marco dressed in a carnival costume and surrounded by masks, that are hard to forget! ” said Lorenzoni.

The masks are sold in hundreds of stores across the city, but for the best quality masks handcrafted by true Venetian artisans, De Bonis recommends Sogno Veneziano Workshop and La Bottega dei Mascareri. Both make elaborate masks inspired by the Commedia dell’Arte. Some of the most common archetypes are Bautawhich covers most of the face but leaves the mouth exposed so that the wearer can eat and drink without removing it, and the Morettaan oval mask covered in black velvet that was reserved for women, who had to secure it by squeezing a button between their teeth, preventing them from speaking.

Is it worth it?

“It is true that it is chaotic. You can’t move through the streets, you’re stuck in the middle of everyone, but the beautiful thing is going to the ball,” says De Bonis, although he thinks yes, it’s worth doing it once in your life.

Lorenzoni agrees. “Carnival is without a doubt the most magical time of the year,” he says. “Walking through the narrow streets leading to the various masks almost allows you to travel back in time and admire the extraordinary costumes with their sartorial craftsmanship that are created specifically for this celebration.”