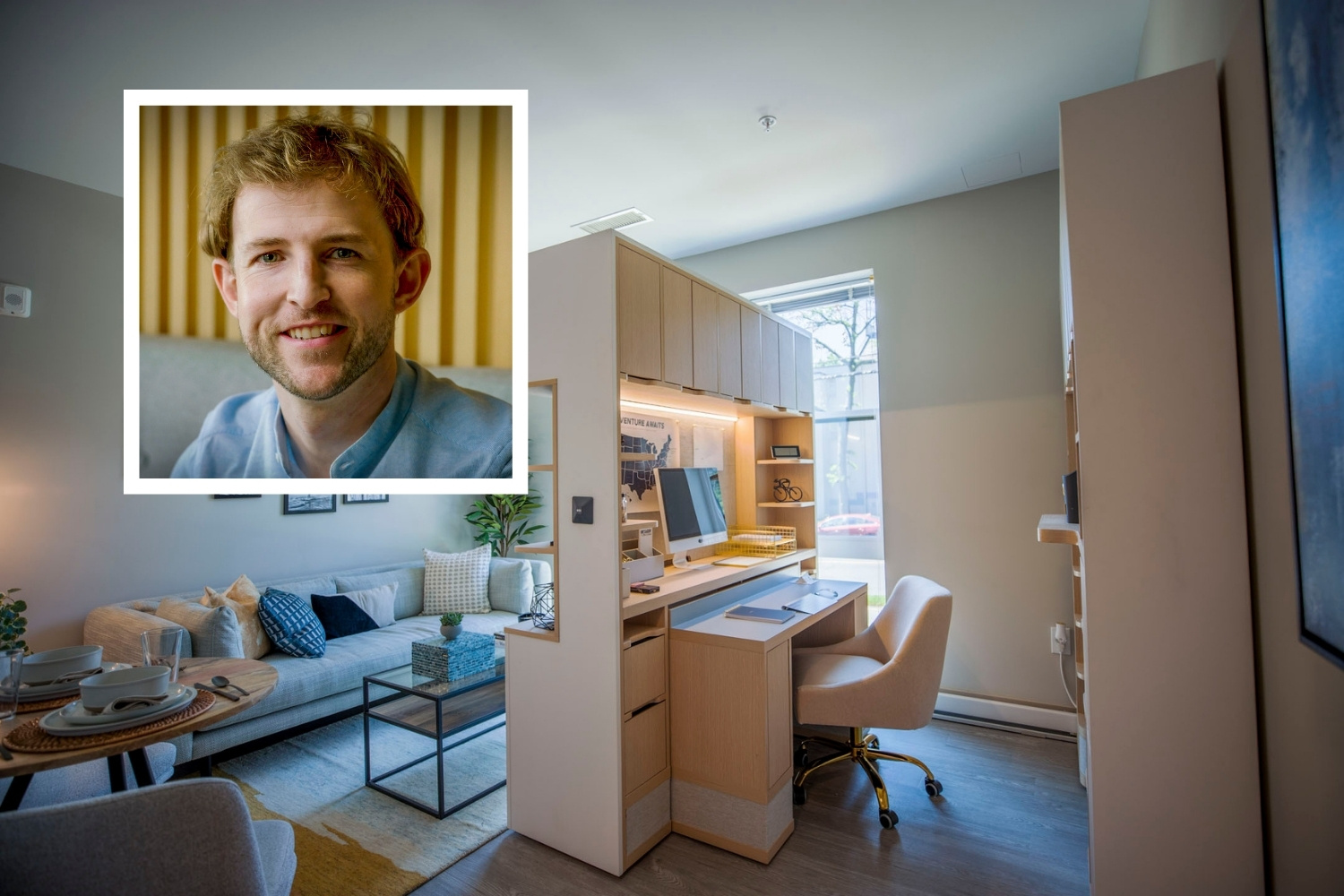 One of the greatest challenges that accompanies global mass urbanization is the lack of affordable housing. This is one of the issues I attempted to address during my masters program at the Massachusetts Institute of Technology (MIT), where, under the guidance of Professor Kent Larson at the MIT Media Lab, my team and I explored ways to challenge a fundamental reality in the real estate paradigm: to live better, you need more space.

We discussed how the rent people pay is generally proportional to the amount of space they need to live: the bigger the apartment, the higher the rent. That’s when we thought: could we change people’s perception of space? Could we prove that people don’t need as much space as they think to live comfortably and functionally?

I led a team of engineers at the MIT Media Lab from 2011 to 2015 as we developed the technology and robotics to “multiply” the space. In 2015, we decided to take these ideas from the lab to the world.

Three months later, we rented a studio in Boston and created our first expandable apartment. There was a robotic wall that rolled across the floor to divide the studio in two, creating some privacy between the two spaces when needed, but could easily be rolled back to create a larger single space for other activities. This wall also had a bed that could roll down at the push of a button, and the wall also opened up to become a walk-in closet, like Carrie Bradshaw’s in sex and the city. These adaptations were all designed to make the studio look more like a one-bedroom apartment, but at the price of a studio.

We put this studio on Airbnb in early 2016 and over 100 people have stayed there, from couples in their 20s to singles in their 80s. Their feedback helped us make feature improvements and refine the design. For example, the original system we installed was all white and seemed a bit robotic, which is fine if you’re an MIT geek like me, but not if you want your home to be more cozy and comfortable.

From the first designs, we made sure to prioritize safety. But we still received a ton of questions from people asking what would happen if they brought their dog or baby to the apartment, or what would happen if the apartment lost power. So we added layers of extra intelligence so that if the system felt it was pressing against anything it would be able to stop and retract quickly, and we also made sure that if the system was losing power, you could manually extract the bed and still have a great night!

Over the next two years, we created many more apartments that people could rent. In 2018 and 2019, we have grown even further. Today, our company, Ori, has 500 expandable rental apartments across the United States and we have thousands of apartments slated for installation within the next two years. Approximately 95% of our apartments in operation are rented on long-term leases of one year or more.

There is certainly a big appetite from young professionals for our evolving studios. But these studios have also been popular with a range of tenants, from busy nurses to business travelers and even empty-nests who have been brought back to the energy of the city.

However, we don’t just create expandable studios, we also offer one-bedroom and two-bedroom expandable apartments, which tend to appeal to couples and families.
We have also extended the functionality of apartments. Some now feature what we call our “Pocket Closet” as a partition that divides the room and functions as a home office on one side and expands to become a walk-in closet. Some have a “Pocket Office”, where at the touch of a button the walls come apart, giving you a home office in the middle of your apartment. Then, when you’re done working, you can press a button and the desktop disappears.

Then, because the bed is the biggest space killer of all, especially since you only need it for eight hours a day, we developed the “Cloud Bed” solution, where your bed slides up to the ceiling , freeing up the space below for you to work, socialize or exercise. As with all of our features, you can control this using your phone or by voice command with Google Home or Alexa.

To help people understand how we “multiply” space using robotics, I like to describe our expandable apartments as being a bit like the human body. The apartments have a skeleton, muscles, brain and skin. The skeleton is the mechanical systems: the metal structure, the wheels, the counterweights, the pulleys and the ropes that allow movement. But to move these objects effortlessly, you need muscles, they are the motors. Then, to move these objects intelligently, you need a brain – that is, the thousands of lines of software code that constantly monitor all sensors and other inputs for safety and performance, and tell engines what they should do. And the skeleton, the muscles and the brain are all contained in a skin, which is what people see on the outside as furniture and walls.

Ori’s “Cloud Bed” is my favorite feature because it has the most impact on me personally. I live in a one bedroom apartment in Brooklyn with my partner. We both often work from home. She works in the living room, where we have a Pocket Office, and I work in the bedroom, where we have a Cloud Bed. If we didn’t have a Cloud Bed, my desk would be tucked away in the corner of the room, with people seeing my unmade bed in the background during video calls. Instead, when the Cloud Bed is stowed against the ceiling, the room looks, acts and feels like a fully functional workspace with a sofa, coffee table and desk.

There are two ways to create our apartments. The vast majority are what we call a ‘renovation’, where a building has already been designed or possibly built, and we add our features to make the apartments in the building feel larger. For example, we could take a conventional 450 square foot studio and make it look and function more like a 600 square foot one bedroom apartment. For a tenant, this apartment could then be a little more expensive than a conventional studio, but less expensive than a conventional T2, which makes it more affordable per usable square foot.

The second method is to work with a real estate developer earlier in the process, when the apartments have not yet been designed or when there is still time to adjust the design. This means that we can optimize the use of space, increasing the density of a building while expanding the functionality of each apartment. As a result, while there may be more apartments in the same overall space, each apartment feels and lives larger than its actual “base” square footage.

When we launched Ori, our intuition was that it would be a solution primarily for more expensive urban centers like New York, San Francisco, Los Angeles, Boston and DC. And, of course, it is, but what we’ve found is that people across the country are feeling similar pressures around smaller spaces and unaffordable rents. That’s why our expandable apartments can now be found in over 30 cities nationwide.

Ultimately, we are tackling a global problem. As millions more people move to cities around the world, townhouses are becoming increasingly cramped and less affordable. So we have a mission: to change that by creating expandable urban apartments that are more flexible, functional, affordable and sustainable, in short, living spaces that can suit the incredible diversity of people who want to live in the most amazing in the world.

Hasier Larrea is the CEO of Or I.

As said to Katie Russell.