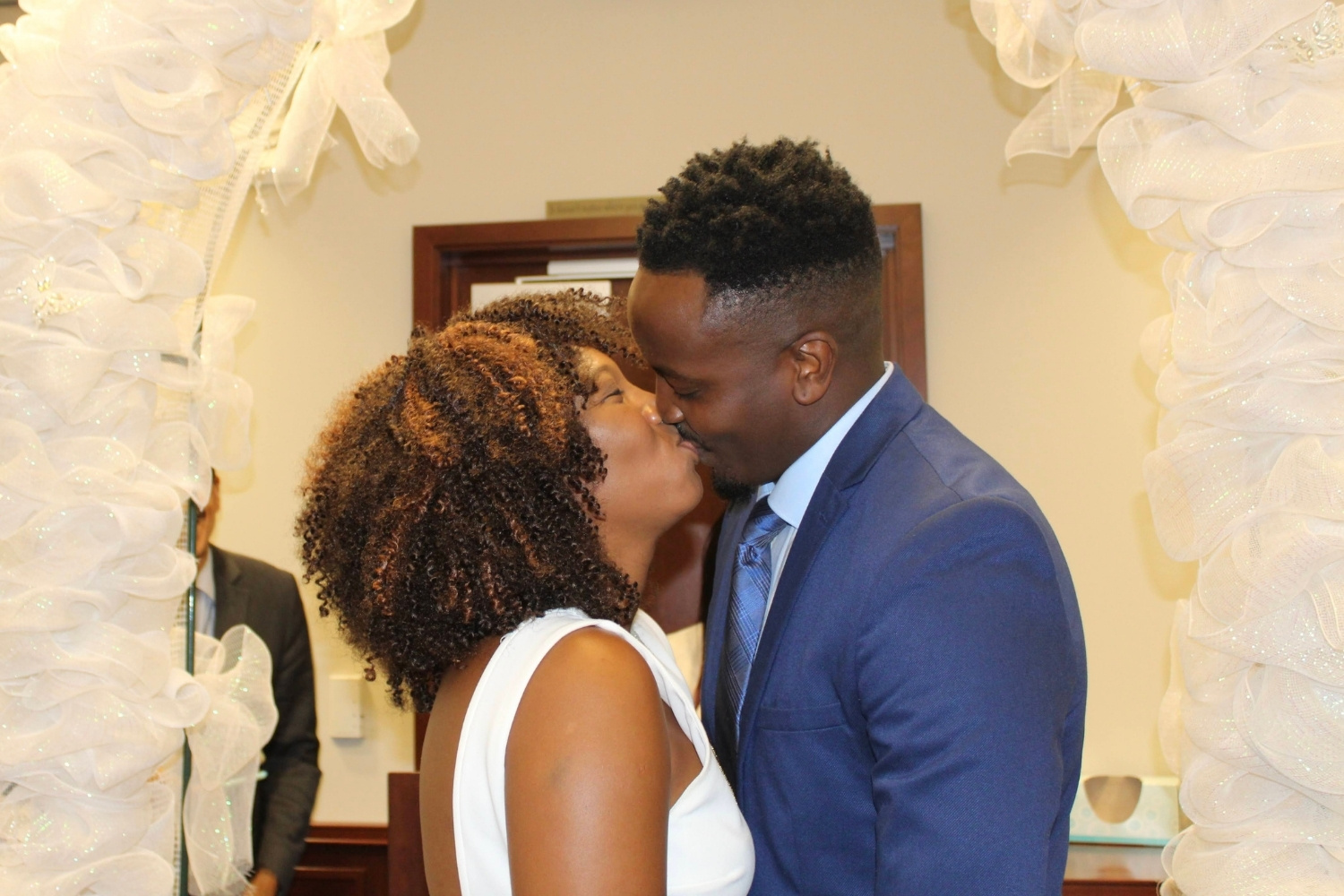 I was not at my best, as I sat in the metro on the way to my friend’s apartment in Paris. I had traveled for a month – to Italy, Bulgaria, Greece, Egypt, Jordan, Kuwait and India – to celebrate the end of my master’s degree in Amsterdam. I was wearing a sweater and jeans, my hair had been braided into braids that really aged after a month, and I had been in the sun so long I had a blast. But my partner, Steven, whom I met that day on the subway, said he thought I was beautiful.

The train was packed that day, September 16, 2016, and I briefly noticed Steven, but just as I noticed everyone getting on and off the train. I was listening to music and remembering my trip when I suddenly thought: what if I met my husband during my trip and I didn’t know it?

That’s when I really started noticing the man sitting across from me. The first thing I noticed were his arms. He was wearing a white T-shirt, but his biceps were piercing. He looked really strong, but he also had a really calming energy that emanated from him.

I thought: what if this man is supposed to be my husband, but I’ll never know because I’ll get off that train and never speak to him?

We kept looking at each other and looking away for 15 minutes. Then the person next to me came down and I moved my legs so he could pass. The man opposite stood up to let the man next to me pass, and when he sat down, his legs were so close to mine that they were lightly touching. I thought maybe he was doing it on purpose, to try to get my attention.

I saw his lips move and took off one of my headphones. It was then that he asked me in French, which I speak fluently, if I wanted to put my backpack on the seat next to me, because it looked heavy. I kept it on my lap, but I thought the conversation was going to continue, so I didn’t put my headphones back on. He asked me if I was a student – because of the backpack – and I said no. My stop came and he asked if he could come down with me, and I said he could do whatever he wanted.

He asked to carry my backpack for me. At first I said, “No, thank you.” I thought he might get away with it! But he kindly insisted, and I did a calculated risk analysis: I didn’t have anything valuable in the backpack, so if he ran away with it, I really wouldn’t lose anything. So he took my backpack, boarded the next train with me, and we continued to chat until I stopped.

He is one of those people who have such a calm energy that they pass it on to you. The conversation flowed so naturally. He told me he was doing a second master’s degree, in international development, which was the master’s degree I had just completed. I thought, what are the chances of us doing our masters in the same subject?

We talked about where we were both from and when I stopped he got off the train with me and asked if we could keep in touch. I gave him my number and he gave me a hug. It was very soothing – I felt like he was giving me his soothing aura.

I left the station, grinning from ear to ear. When I told my friend about it, she started teasing me about it – it was like we were teenagers. A few hours later, I received a text from Steven, which made me smile again.

He offered to go out with me, but I told him that I wouldn’t have enough time, because I was only in Paris three days before I had to take the bus back to Amsterdam for my graduation. . But he insisted. I would have been put off by his persistence if he had been anyone else, because that kind of behavior usually puts me off, but I thought it was cute.

We saw each other the day before I left. I didn’t have much time, so I chose a fast food restaurant across from the station where we had previously said goodbye. I thought we would only be there for about an hour as I still needed to pack, but that was really good so I changed my mind about not having time. We went for a drink in a bar in the center of Paris and took the last train back to my neighborhood after midnight. He walked me to the front of my friend’s building, and he kissed me goodnight.

During our date, he was very straightforward about finding a relationship. I told him to slow down, we were still getting to know each other. But, in the end, I appreciated him being honest about it because I’d been on dates with guys who weren’t looking for anything, and I usually cut them off quickly. I guess I was looking for a relationship without knowing it.

We stayed in touch while I was in Amsterdam for my degree, texting for hours every night. A few days later, I returned to Paris for a week before returning home to New York. At that time, I saw Steven a lot and we continued to know each other.

On the way to our third date, he said, “I don’t want you to go back to New York,” and I said, “Why? He was sitting across from me on the subway and he said, “Because I love you.”

Things were going too fast for me. I remember saying to him, “Listen, don’t you think it’s too early to be in love with me? You do not know me. He was quiet after that.

I never believed in love at first sight and I still don’t, because I don’t think you can love someone you don’t know. I am a very logical person. I think you have to know someone on a deeper level to be able to love them as a human being. So I can’t say I liked Steven when I first saw him. I thought he was a very interesting person that I wanted to know, and that he had a very calming aura that made me curious, but I can’t say that I liked him.

Still, I wanted to get to know him more. We met again the day before I returned to New York and agreed that we would keep in touch, but I didn’t expect anything to happen because of the distance.

Back in New York, Steven and I texted, called, and checked in several times a day. It became an unforced relationship. By the end of October 2016, we had become official.

I fell in love quickly. After a phone call in November 2016, I messaged Steven telling him that I was in love with him. I realized it was different from all my previous relationships because I could be myself with him.

I think the universe played a big part in how it all turned out. I took a job in DC and it involved traveling a lot in Guinea, which meant that every few months I had a layover in Paris and I could see Steven.

We maintained our relationship at a distance for three years. It wasn’t always easy, and at one point I felt Steven was a bit distant, so we had a two-month break. But we got back together and things picked up where they left off.

Things got pretty serious between us towards the end of 2017. He would jokingly ask me my ring size or say he was looking for something special.

I visited him in Paris for a 10 day vacation in November 2017. We had an Airbnb in Paris and I was exhausted from the flight so I was going to take a nap, but then he said, “Wait, I I have something for you.” He got into his bag while I was sitting on the bed and got down on his knees.

It was so natural and I said yes. I knew Steven was “the one” and that I wanted to be with him. I am a very anxious person while he is very calm so he balances me out. And he is very supportive. When I’m with him, I don’t have to impress him or be someone else around him. I can be 100% myself. I have never felt so comfortable with anyone before him.

Steven joined me in Washington DC in July 2019 and we now live in Florida. We got married in a transplant on September 16, 2019, exactly three years after we first met on the subway.

The experience made me believe in destiny, but I also believe in African spirituality. Interestingly enough, 2016 was the year I started exploring the religion of my ancestors, learning about the love and air orishas and all that. Thinking back to my trip to Egypt, I wore yellow most of the time, which is the color of the orisha of love, Oshun. I think it has to do with why I met Steven. I don’t think I would have met him without the African orishas – and fate.

Andye Sanon is an international development professional who lives in Florida with her husband Steven. In 2019, she and Steven started a handmade clothing and home decor business called Afrayiti. Andye is on Instagram at @dyetravels.

As said to Katie Russell

Are you traveling to Europe soon? 6 tips to help you save money and avoid misery

Cityzenith is suing self-proclaimed “crowdfunding promoter” Shane Liddell for $8,000,000 in US Federal Court for libel, libel and fraud