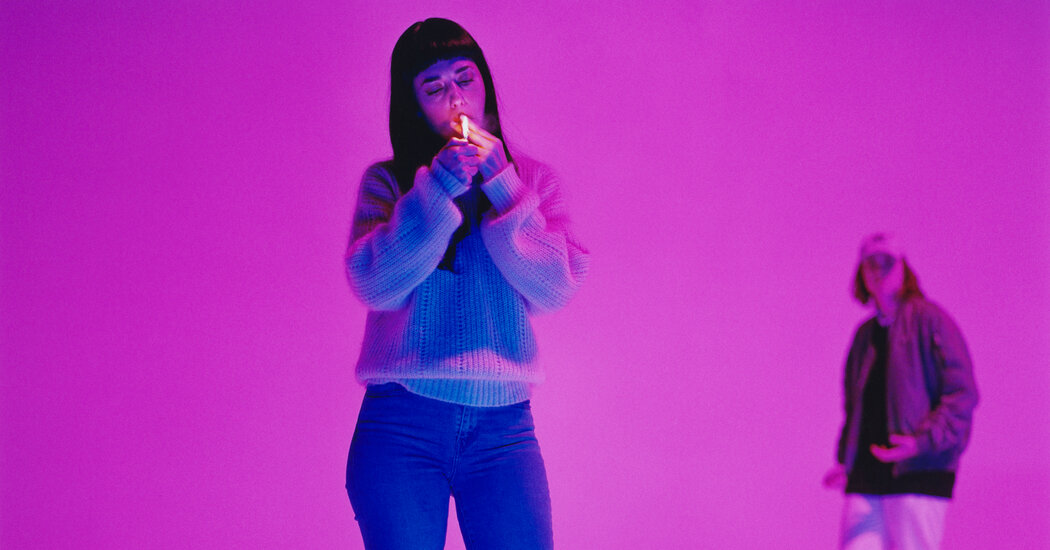 LAUSANNE, Switzerland — There’s a feeling streaming theater can’t quite replicate. It’s the feeling of being immersed in a performance, to the point of clinging to each phrase, each sound, each gesture. Distractions fade away. All that matters, briefly, is the actors’ next move.

In “L’Étang”, a new production by French director and choreographer Gisèle Vienne, no gesture is trivial. Its two protagonists, Adèle Haenel and Ruth Vega Fernandez, aren’t just in the room with the audience: for much of this trippy exploration of family taboos, you feel like you’re breathing with them.

After six months of uncertainty due to the pandemic and two canceled Paris races, ‘The Pond’ finally hit the stage earlier this month – in the Swiss city of Lausanne. While theater performances in France and Britain won’t resume until later in May, performance halls in Switzerland cautiously reopened on April 19.

Restrictions still apply: no more than 50 spectators are allowed per show. Still, it’s a start. At the Vidy theater in Lausanne, where “The Pond” ran until Wednesday, tickets for the season sold out within hours. (The production is set to tour Europe this year, with a presentation at the Holland Festivalin Amsterdam, in June.)

In a way, a world premiere in Switzerland suited “The Pond” perfectly. The Vienna show is based on a short play by Swiss writer Robert Walser, about a child who pretends to drown to test his mother’s love.

Walser wrote “The Pond” as a gift to his sister, Fanny, and it was arguably never intended for the stage. (For starters, it’s just 20 pages.) That suits Vienna, a trained puppeteer whose work is rarely guided by text. Its adaptation is by no means literal, but it takes a magnifying glass for Walser’s play’s unsettling allusions – to child abuse, incest and family trauma.

It is also a feat of polyphony, which draws on Vienna’s interest in the alteration and distortion of the voice. (In 2015, she explored ventriloquism in “The Ventriloquists’ Convention.”) Between them, Haenel and Fernandez play 10 characters: Haenel plays Fritz, the central character who simulates suicide, as well as his siblings and young friends, while Fernandez represents the adults in the story.

These are virtuoso performances, constructed from seemingly disparate elements. When the lights are first turned on on a large white box, designed by Vienna, the audience is greeted by seven puppets – life-size teenage girls, some of them huddled on and around a bed, with clothes scattered on the floor. One by one, to deafening club music, they are carried offstage by a technician.

Haenel and Fernandez enter as the last doll disappears, and strangely the actors seem to have taken inspiration from the inanimate figures. Every step they take is in extreme slow motion, but it doesn’t look robotic: Haenel, in baggy pants, oversized sweater and cap, has the faint foreboding of an angsty teenager, while Fernandez swings her hips exaggeratedly .

When they start talking, however, Walser’s lines come quickly. The story arc is clear, from Fritz’s bickering with his sister to his attempts to reconnect with his mother, but what happens visually has relatively little to do with it. When Fritz visits a sick friend, we see Haenel lying on the ground, laughing and emptying a bag of sweets on her head.

The gap between story and movement gives the proceedings an air of unreality, as does the accompanying soundscape. Both Haenel and Fernandez carry body mics, and every sigh and moan is amplified to accompany an eerie electronic score, composed by Stephen F. O’Malley and François J. Bonnet.

Haenel, who rose to fame as a film actress and became a prominent voice for the #MeToo movement in France, makes amazing use of this setup. Her voice goes up and down a dime as she moves from child to child in the story, but she never plays the characters in a conventionally realistic way.

Opposite her, Fernandez plays Fritz’s parents – especially his mother – with a hardened distance. While she and Haenel rarely look at each other, there is an unspoken power struggle between them: At one point, Haenel stands over Fernandez as she collapses to the ground and spits unhurriedly at his feet. .

It is a piercing performance, which brings to the surface emotions often suppressed in dysfunctional family contexts. Haenel and Fernandez are by turns sensual and monstrous; Fritz is thrilled to have earned proof of his family’s love after his carefully staged stunt by the pond, while his mother decides to make amends without quite knowing how.

“Now everything is fine,” Fernandez says. “I’ll catch up.” In short, they walk towards each other. A resolution is in sight, until Haenel stops and bends over in pain, swallowing air. While Walser suggests a form of reconciliation, in the world of Vienna there is no happy family ending. The trauma is too deep.

It may seem too dark for audiences after a tough year, but walking out of Vidy’s theater my spirit was as fired up as it has been in months. For 90 minutes, the artists claimed my full attention and paid it back in spades. I’m ready for more.