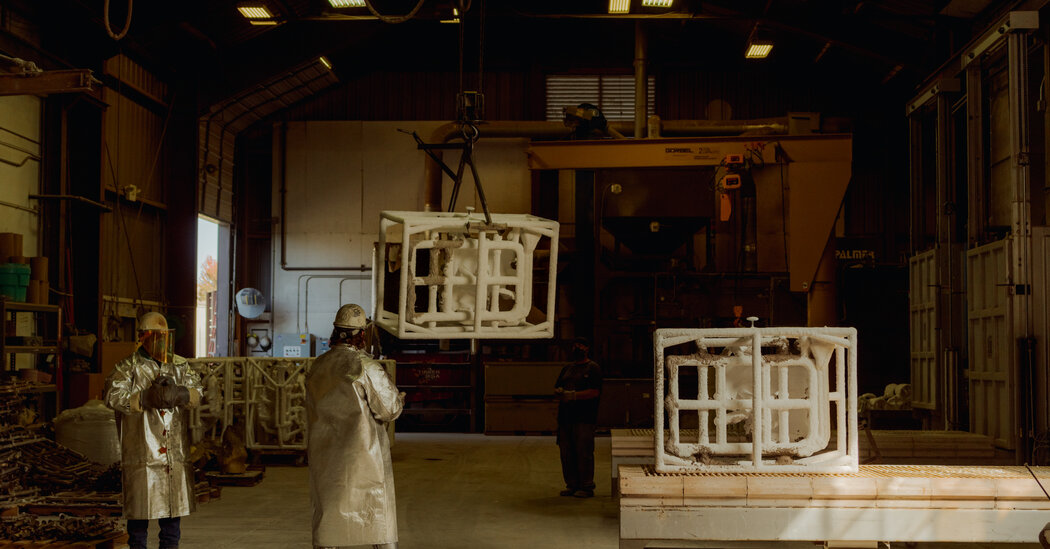 This article is part of our last Fine Arts & Exhibitions special report, on how artistic institutions help the public to discover new options for the future.

WALLA WALLA, WASH. – In this valley nestled between the Blue Mountains and the Palouse Hills, there is a sleepy warehouse district where giants are born.

At Walla Walla Foundry, all kinds of artistic behemoths rise up: a 36-foot-tall Venus de Milo by Jim Dine; a squad of caryatids freed by Wangechi Mutu; the two-ton head of a forest spirit by Yoshitomo Nara; Yayoi Kusama’s playful pumpkins.

As Walla Walla Valley has emerged as a wine destination, many prominent contemporary artists know it as the home of this fine arts playground, which has spawned relationships that are as intimate as they are professional. Sculptor Deborah Butterfield likens the foundry to “an artists’ chocolate factory where just about anything you can think of can be made.” Mr. Dine called it an “extension of the artist’s hand”.

The work he produced has been exhibited, collected and installed around the world, from MoMA and Central Park to the Palace of Versailles and the Venice Biennale. Yet, if you’re not directly involved in the large-scale art business, you’ve probably never heard of this place.

“We’ve always been passive and let the work speak for itself,” said Lisa Anderson, co-owner.

The Walla Walla Foundry is one of the largest contemporary art foundries in the world, spanning a cluster of buildings that house facilities including a traditional bronze foundry, wax and silicone workshops, size 3D printers. ‘one bedroom and a 40 foot -long paint booth.

Originally established as Bronze Aglow, Inc., in 1980 by Mark and Patty Anderson, it started as a small family affair where the couple raised their children Jay and Lisa around guest performers. Since 2008, the foundry has doubled in size and now employs 100 people – artisans, craftspeople, engineers, designers and administrators – who help artists create their visions, commissions with price tags ranging from tens of thousands to millions.

In an interview for a 2004 book on the foundry, “Extending the Hand of the Artist,” Mark Anderson, who died in 2019 at age 65, explained the philosophy that makes it an artistic beacon: “The word of the foundry has always aired by the artists who were here. We never did any advertising.

And with the exception of a few outreach activities and limited tours, the campus is closed to the public.

Since Mr. Anderson’s death, the foundry has gone through a period of transition, with Patty, Jay and Lisa Anderson as owners; Jay and Lisa also run the family’s sister business, Vineyard Foundry, two blocks away, where Lisa runs a gallery with a list of exhibits that have included Ai Weiwei and James Lavadour.

The next unnamed exhibition, which opens on November 4 and runs through January, is dedicated to Mark and “his connections to many of the artists he served at the Walla Foundry. Walla ”. The works of Mr. Dine, Ms. Butterfield, Nancy Graves, Keiko Hara, Manuel Neri, Lynda Benglis and others will be taken from the permanent collection of Mark and Patty Anderson.

Jonathan Follet, a Walla Walla native who became president of the foundry in late 2020, said staff and management have been thinking about the legacy and the future.

“’Reflection’ sums it up best,” he said. “It’s just that moment in time where we can look at what we have and where we want to go and you know, kind of capitalize on the story. This place ruled for 40 years.

Today, the foundry is in a sustained era of constantly receiving large-scale sculpture commissions from artists and galleries. Niki Haas, of the Haas Brothers, an artistic design team that used the space to create large-scale woodwork like a walnut table and bench set, said the foundry is leading a phenomenon in as long as behind the “mega-maker” curtain of ever greater art.

“Carving monumental has a lot to do with places like Walla Walla,” said Mr. Haas. “They are nameless and faceless, and that intrigues me all the more.”

From the street, the Walla Walla Foundry campus is unpretentious: a handful of warehouses with expanses of lawns and trees. During a site tour with Mr. Follet and the younger Andersones, glimpses soon emerge of the chemistry that occurs inside.

A grassy corner houses a 2013 40-foot bronze tree by Paul McCarthy. Surrounding the tree, M. Follet, with a master’s degree in architecture, says it is one of the first foundry projects to adopt extreme seismic engineering, providing an additional layer of security for collectors and the long-term sustainability of their investments.

“This particular piece could basically go anywhere in the world and meet structural codes just because it’s so sturdy,” he said.

More Glimpses: Across the lawn are two huge pieces of organic looking bronze – which are part of Ms. Benglis’ “Hill and Clouds” series.

Inside a workshop, amid the hum of drills and sanders, a team erected a shimmering 20-foot-tall stainless steel creature by an artist Mr. Follet couldn’t name (thanks to a non-disclosure agreement with the foundry). “They’re checking the footprint,” he said. “There are several characters in this work and their orientation to each other is really important.”

These spaces, filled with the disembodied heads and limbs of giant creatures like a sort of bizarre art slaughterhouse, can get crowded. Some of the larger sculptures, like Mr. Dine’s 23,000-pound “Cleveland Venus” (2003), have to be made in a supine position before being erected outdoors.

That will change soon, Jay Anderson said, with the grand opening of a new building, slated to open next summer, which will allow the foundry to create multiple large-scale projects at once, projects which can take anywhere from a few months to a few years.

“It’s supposed to be able to accommodate a 50-foot sculpture inside,” he said.

Outside the orbit of art

When the Andersons established the foundry in the 1980s, it was not for the express purpose of building monumental art. At the time, the campus was a building and the small team focused primarily on life-size bronze casts for a handful of artists such as Mr. Neri and Robert Arneson. The news spread to Mr. Dine and Ms. Butterfield, and so on.

Ms Butterfield and Mark quickly became quick friends and their families grew closer. Thirty-seven years later, Ms Butterfield has a studio at the foundry and comes to work there several times a year, driving a truckload of sticks from her home in Montana for wax burns.

“It has totally changed my life,” she said. “I think no one can match the quality.”

This quality is born from a specific environment. There is the historical knowledge and expertise of 40 years of bronze casting, wax molding and woodworking, combined with new technologies like polymethyl methacrylate 3D printers and the CNC machine, a tool. machining machine which, on this visit, was in the midst of a 1,000 hour job to polish a solid steel disc to a stunningly transparent mirror finish.

Matt Ryle, a project manager who was Mr. Barney’s chief manufacturer, says the quality and boldness of the work is also a direct result of the remote and laid-back location, far from the orbit of the world of l art with lots of room to experiment.

“The foundry isn’t jaded by the art world or civilization, you know, the crowds of city life and the well-worn industrial roads,” Ryle said. “They understand the artist and give artists the opportunity to explore.”

Standing next to one of Isa Genzken’s 33-foot-tall orchid sculptures – due to visit Gstaad, Switzerland in November – Mr Follet and Jay Anderson wondered if the best way to get there ‘install would be the helicopter, thus avoiding headaches. to navigate narrow winding mountain roads with such a large cargo.

Some of Jay Andersons’ fondest memories of his youth accompany his father on installation trips, such as one in an Idaho forest in the early 1990s to set up Ed Keinholz’s “Mine Camp”, which reproduced in bronze a 1950s hunting scene, with casts. a 40-foot-tall tree, a full-size pickup truck, a deer carcass, hunting accessories, a campfire, and Keinholz himself. (This spring, the foundry installed Ms. Kusama’s “Dancing Pumpkin” at the New York Botanical Garden.)

Mr Follet said the foundry is attractive to artists because it is a one-stop-shop, from design – educating artists on the best materials and methods to achieve their visions – and from fabrication to setting. checkout and on-site installations.

While the foundry’s reach is global, it also left an indelible and intimate impact on Walla Walla herself. Whitman College offers an outdoor sculpture walk featuring foundry creations, such as “Styx” by Ms. Butterfield (2002) and “Carnival” by Mr. Dine (1997).

In Pioneer Park, in the heart of the city, Lisa Anderson approached a sprawling London plane tree and patted a huge low member; it emitted a hollow metal ring. Now cast in bronze, the original branch was popular, a place for children to climb and residents to have their pictures taken. When it started to rot and the city removed it a few years ago, Mark Anderson donated the services of the foundry to make a cast. On Arbor Day, the city and the foundry unveiled the new bronze branch of the tree. Mr. Anderson did not live to see it.

“My father used to play on this tree when he was a child,” said Lisa Anderson, as she traced with her finger the bronze furrow of initials and hearts carved by the locals in the original tree.

The secret toll of racial ambiguity