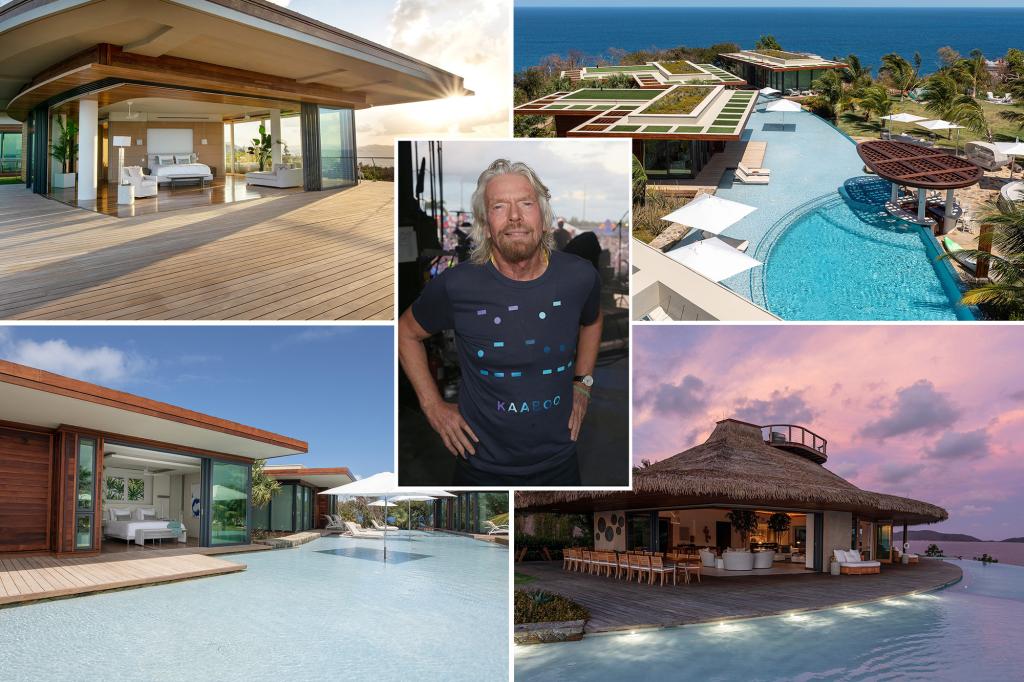 Part of the British Virgin Islands, a territory of Branson’s native Britain, Moskito’s newly opened glamorous rentals include the nine-bedroom Oasis Estate, perched on the island’s highest point and based around a four-story main house with a pool surround and panoramic sea views.

There’s also the eight-bedroom cliffside Point Estate overlooking and directly accessing the island’s communal white-sand beach, including a cliffside dining pavilion, plus a massive infinity pool. with a magnificent view of the surrounding turquoise waters. There’s even the Branson Estate, a three-villa complex with three pools, three hot tubs, and beachfront dining and gaming areas designed by the Bransons themselves.

“These are huge, grand private estates with incredible first class service,” said Kenton Jones, BVI Regional Manager of Virgin Limited Edition. “Obviously, this is the top of the range of travel.”

Still, this includes a concierge service to pre-arrange free activities, from kite surfing to Hobie Cat catamaran sailing. Your own private chef and food and drink are also added.

“Before traveling, the estate manager is in contact to tailor a set of menus. We have Caribbean chefs to provide local cuisine, but we also have international chefs,” Jones said. “We create an experience around the food. One night it might be a Caribbean barbecue on the beach, another night it might be on your patio under the stars. All with exciting menus to set mealtimes apart from the routine.

And there will be no dishes to clear; each estate has its own maintenance staff.

Branson bought Moskito in 2007 for £10 million, or nearly $13.5 million. Although he oversees the development of the 10 allotted building plots, nine have private owners and are individually designed under the watchful eye of the tycoon.

“He has an active role in what’s being created so it doesn’t harm or change the island,” Jones said. “That’s the great thing about Moskito: what’s been built adds to the beauty. It fits into the landscapes.

While Moskito’s private life is the big draw for A-Listers, celebs who aren’t far from being seen will no doubt find plenty of glamorous TikTok and Instagram wow moments.

“I bet we’ll see pictures of sunset drinks at The Point’s shallow pool, which looks west and is spectacular,” Jones said. “And on the roof terrace of the Oasis, perfect for stargazing. The whole island is an Instagram paradise, everywhere you look,” he added.

Moskito is next to Branson’s Necker Island, which he bought for a whopping $180,000 in 1979. It’s now his own private, multimillion-dollar resort, often populated by Branson’s friends like Kate Winslet, Harry Styles and Ronnie Wood. Jones points out that Necker is actually available for hire all over the island. The price of around $105,000 per night makes Moskito a bargain.