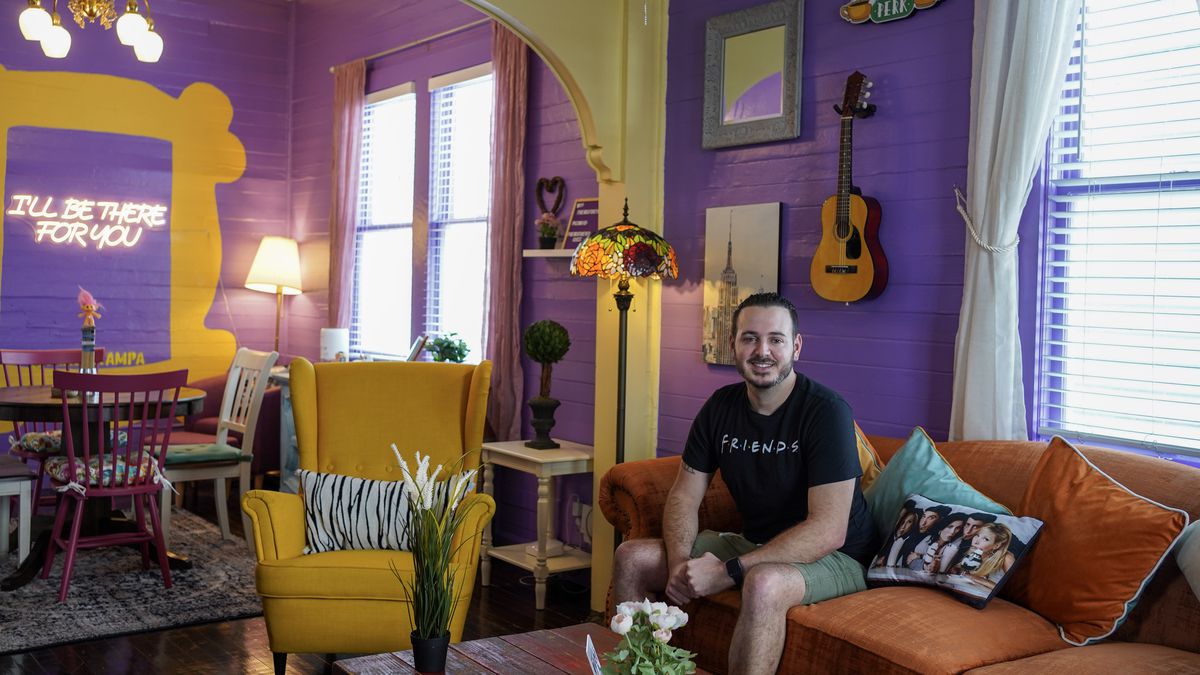 Inside the Tampa Airbnb that looks like the sitcom “Friends”

An Airbnb rental in Ybor City needed a makeover.

The house had to be repainted and the kitchen cabinets didn’t match, said Frank Albert, an Airbnb superhost with 28 properties in the Tampa Bay area. But it was the right fit for a project to recreate scenes from one of the most iconic sitcoms: “Friends.”

Within two months, he and his best friend were on the hunt for the perfect paint colors and decor similar to what was on the show, official “Friends” merchandise, and a Central Perk orange sofa. In April, Albert listed the 1920s bungalow on Airbnb in hopes that it would not just be a place to stay to see Tampa attractions, but become one himself.

While Albert said “Friends” was one of his favorite shows, the main reason he chose the ’90s sitcom over the six young adults living in New York was because of its recognition. He had the idea about a year before transforming the house.

“There are so many shows where if you did a theme, (guests) might not understand what it is,” Albert said. “Whereas here, with the purple color of the wall and the yellow frame of the door, just seeing this picture, even if you’re not a fan, you’ll notice it’s ‘Friends’.”

Upon entering the Airbnb, it’s not an exact replica. It’s a “modern interpretation with a lot of nostalgia added,” Albert said.

The 1,100-square-foot, two-bedroom, two-bathroom property mixes scenes from Monica and Rachel’s apartment, Joey and Chandler’s apartment, and the Central Perk cafe. Rental can cost between $150 and $350 a night, depending on dates and availability.

The living room and dining room have Monica and Rachel’s purple walls with a piece of Central Perk with her orange couch. The walls are filled with framed photos of New York and memorable quotes from the show, like “Pivot!” and “We were on a break.”

In the dining room, the main feature is a wall with a white neon sign that reads “I’ll be there for you” inside a yellow frame mural. A cabinet has stuffed animals like a lobster and Ross’ monkey, which Albert said he brought back from the “Friends” experience in Washington, D.C.

Throughout the process, Albert said he was the most like Monica from the show because he wanted everything to be perfect and in place. As he handled the remodel, he credits his friend Erin Wertman with the mastermind behind his appearance. Wertmen is also a property manager specializing in interior design.

When asked if he would do another themed rental in the future, Albert said he was considering it but wanted to see how this one performed. He has three to four other themes in mind for the future.

“I just don’t want to say and then give the idea to someone else,” Albert said.

His most memorable booking at the “Friends” rental so far was a family wishing to celebrate a woman’s 108th birthday. Guests came to celebrate surprise anniversary trips and anniversary dates. There are also people who book for its proximity to Ybor City, Casa Santo Stefano and Columbia Restaurant. He keeps treats from Chocolate Pi in Seminole Heights and the Chill Bros. Scoop store in Ybor City in the freezer with “Friends” character stickers on them.

Albert said he hopes it will become a memorable place for guests.

“It reminds a lot of people of their childhood,” Albert said. “And I think no matter what phase of life you’re in, there’s always something you can relate to.”

Economy cars, hybrids, suddenly hot small SUVs, sold out. But the supply of full-size trucks and SUVs is growing

‘Marcel The Shell With Shoes On’ Makes a Splash – Specialty Box…