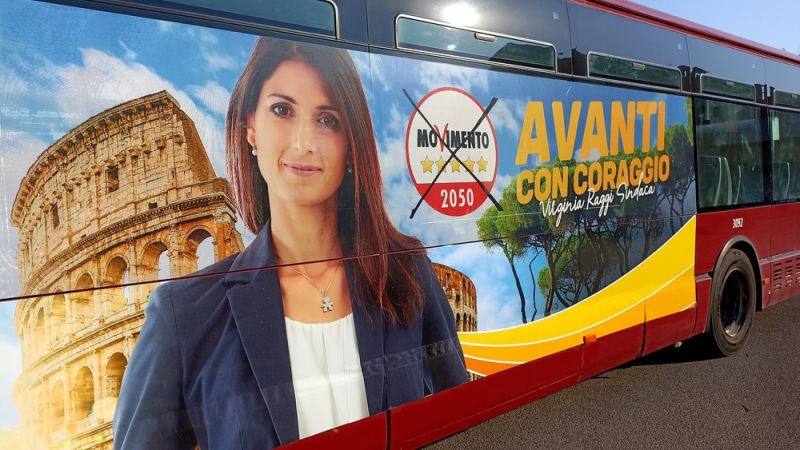 Both admired and criticized for five years, Rome’s mayor, Virginia Raggi, faces elections in October. She discusses the city’s future in an interview with Wanted in Rome.

In what state did you find the municipality of Rome when you became mayor and in what state, after 5 years, do you leave the Capitol?

When I arrived at Campidoglio, I found a fixed administrative machine, without wheels or steering wheel. After putting the accounts in order and starting to repay the debts we had left over from the past, I relaunched it under the banner of legality. The other candidates don’t even know where to get their hands, but I can run him.

We worked hard to get the budgets approved on time and this great commitment was also confirmed by a major rating agency like Standard and Poor’s, which improved the forecast on the capital’s accounts by shifting the outlook from negative to stable.

Building sites and investments are back in our city: they are long-term projects that will change the face of Rome, making it even more modern, attractive and sustainable.

Many multinationals, from Netflix to all the major electricity sharing companies, have decided to open offices or branches in the city, bringing jobs and growth. The big film productions are back and no less than 16 different luxury hotels are opening their doors in the city, such as the Bvlgari Hotel in Piazza Augusto Imperatore.

What is the most difficult aspect of governing a complicated city like Rome?

Rome is a large and complex city in many ways. Being mayor is the best job in the world, but you need more effective tools. For this reason, a law that gives Rome more powers is needed to further improve the efficiency of our city. And this is the reason why, since the beginning of my mandate, I have tried to include this request among the priorities of the political agenda of our country.

The work of Parliament is moving forward: a victory for all of us. Above all, because the current bureaucratic framework would not allow us to overcome the challenges of the future, which are numerous and decisive: the PNR, the Jubilee of 2025, the candidacy of Rome Expo 2030. We must be ready and prepared, by simplifying the procedures and clearly define responsibilities and functions.

If you were re-elected, how would your second term be different from the first and what would be the priorities of a new administration?

My goal is to continue the work that we have started and to continue on the path we have mapped out in recent years. We want to confirm an important tool such as microcredit to stimulate the investments of many small entrepreneurs in our city and save them from the danger of usury.

We want to take care of those in need and offer them a home to overcome the housing emergency with funds from the PNR. We have thought of new “Km0 Services” in local markets to help families and the elderly who confirm the inclusive vocation of our city.

Rome has an incredible heritage of trees and green spaces. We want to promote it even more immediately and we also have an ambitious long-term dream of urban regeneration in the suburbs: that of creating a “Park City” where families, young people and all those who want to play sports in the suburbs. different neighborhoods can find state-of-the-art facilities and services. We have already laid the foundations for this vision for the future and we want to reap the benefits in the years to come.

As well as in public transport. After having saved ATAC from bankruptcy and put 900 new buses on the territory, it is time to revolutionize them with a computerized transformation in real time: an application already in experimentation, which will be usable from June 2022, capable of managing traffic. in the city and allow Romans and tourists to choose which way is best to take at any given time.

Critics have not failed over the past five years. What do you say to detractors?

The facts speak for themselves. I leave the chatter to others. I only have Rome at heart.

What do you think is a success for your administration and what is rather than a failure?

I am proud of the work accomplished in the suburbs. They call me the mayor of the suburbs because I am rearranging them after decades of neglect. In San Basilio, for example, we intervened to try to change the face and image of the neighborhood, too often identified with episodes of delinquency, to the detriment of many associations active in the neighborhood and of the many honest citizens who live there: took places away from drug trafficking by bringing cultural events to the suburbs; cleaned up a property that a clan used for drug trafficking to turn it into a gymnasium for local youth; improved the local market; upgraded the historic whale fountain; brought the new buses; started renovating social housing.

Bringing legality back to Rome, demolishing the illegal villas of Casamonica and driving the Spada family out of Ostia, is certainly a success for all citizens. It is clear that in some areas the results took longer to arrive, as I said we found a city at a standstill and full of debt. Now we must reap the fruits of this hard work.

How to improve the tourist offer in Rome in the years to come?

The pursuit of the strategic axes of the Futurama Tourism Plan: the launch of the Destination Management Organization (DMO) to provide Rome, like the other European capitals, with an integrated governance structure for the strategies and processes related to tourism, the planning of tourism campaigns, communication and marketing actions aimed at defined targets, sharing of programs and events with the sector for planning the offer and seasonal adjustment of flows, profiling of an ad hoc reception for the different types of travelers.

Important European capitals have decided to limit the “AirBnb” phenomenon. How does a possible new administration intend to deal with this problem?

Limiting entrepreneurship is not the solution; managing it with care in order to combat abusive and undeclared activity is our choice. In 2020 we signed a pilot agreement with Airbnb for the payment of the tourist tax: a collaboration with the online reservation platform in the name of legality, security and the fight against illegal activities, which in the pre-covid era would have brought in significant income reinvesting in the city.

How do you plan to resolve the longstanding problems of WADA and ATAC?

For ATAC, we have already charted a clear path with which we have saved the company, protected twelve thousand jobs and relaunched the entire public transport service. With the plan of arrangement with continuity we have kept ATAC public and saved it from bankruptcy, facing a monstrous debt accumulated by previous administrations of 1.3 billion euros. Thanks to a solid business plan and the progress made in recent years, ATAC, for the first time in its history, also recorded operating profits, both in 2018 and 2019.

Over the past few years, we’ve also invested in fleet renewal, putting over 900 new buses on the road and resuming hiring workers and drivers to service the city.

Fortunately, AMA’s problems have already been resolved by our administration. We’re not saying it, but the facts speak for themselves. After decades of waste and mismanagement, we have taken laborious but successful action to restore the accounts of the subsidiary.

This work has led us to close the 2017, 2018 and 2019 corporate budgets, to approve the Recovery Plan and the new multi-year Business Plan. Thanks to mega funding of over 300 million euros, we have filled the gigantic hole left by those who came before us (over 250 million euros) and we have restarted with new rentals, the purchase of new vehicles and improved collection services. In the plan, among others, there is also the construction of two new factories that will help Rome achieve autonomy in terms of waste disposal.

Rome is home to two football teams with two demanding fan bases. We have often talked about giving these clubs the possibility of having their own stadiums. What would be the position of a new administration of yours?

As you know, I work with Roma. The Friedkins have opened up to the new stadium. In this way, we have definitely turned the page. At the moment we don’t have a plan, but for me the best place to build a new facility might be in Ostiense, where there are already many services. It is a redeveloped area and, above all, it is close to the heart of Romanisti. We also work with SS Lazio. It would be great if both clubs in the capital had their own stadium. I am working hard to achieve this goal.

Woman and mayor in a man’s world. If and how difficult was it to move forward?

I am the first woman to be elected mayor of Rome. An honor for me and a source of pride. It’s true that there have sometimes been prejudices, but as many women do every day, I respond with work and commitment. I have always focused on the projects at hand, and this is what I will continue to do.

How has your life changed since you became mayor, what did you miss the most about your previous life?

Serving citizens requires constant commitment, but it is also the most beautiful thing in the world. It is helping people, carrying out a project, an idea, a vision. Of course, before becoming mayor, I had more time to devote to my family. It’s the only thing I miss.