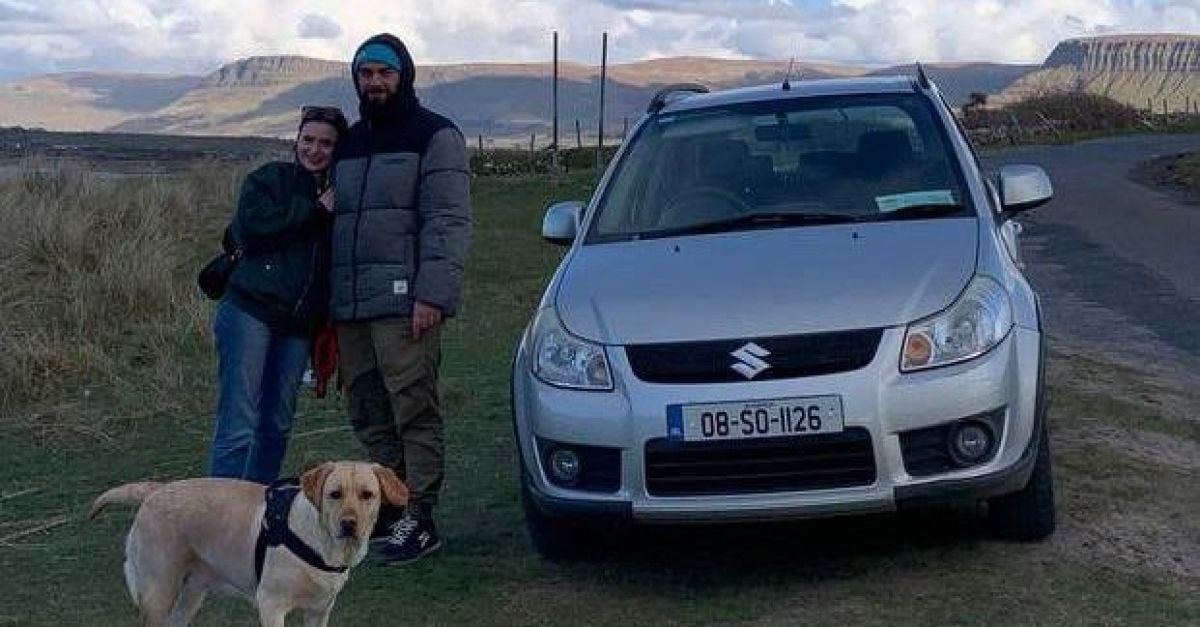 Irish photographer Bradley Stafford has called Kyiv home since 2017 – the Ukrainian capital is where he met his wife and the couple are currently based in Co Leitrim after fleeing before the Russian invasion.

After a long and arduous journey, they traveled to Ireland with a friend and their Golden Labrador, Bailey.

As Russian President Vladimir Putin mobilized thousands of troops to the Ukrainian border, Mr Stafford and his wife Anastasiia made the decision to travel 300km west of their home to the town of Rivne to stay with his mother.

He said there was still a sense of calm at that time, with people hoping war would be averted, and then February 24 came and changed life as they once knew it.

“Around 4am I heard a big buzz, I heard planes and fighter jets flying over our building,” Mr Stafford told BreakingNews.ie.

“I was on the seventh floor, I could see that people were starting to come out of their homes.

“I texted my mom at home to let her know I was safe because I knew she was going to wake up to some scary news. Then I had to wake my wife up and tell her that the war had begun.”

The next day, they experienced their first airstrike siren.

“We went to the basement but all the doors were locked, some people started panicking, but eventually we found one. It was cramped, dark, nowhere to sit, we stayed there for half a Throughout the day, there were seven or eight of us and each time we had to leave with our emergency suitcases, go down seven flights of stairs with the dog. We then found a bigger bunker.

“It was more of a basement than a bomb shelter. People were just trying to help each other. We had our dog, she had no idea what was going on…she would come upstairs to say hello to the strangers, and even brought smiles to a few faces.

“Until 11:30 p.m. that night, it was the last siren. Until then, my wife hadn’t wanted to leave, she has grandparents who couldn’t really leave, and her mother didn’t. Something changed in her mind and as we sat down for the last siren she said to me ‘let’s go’.”

They were on the road at 6 a.m. Anastasiia’s mother and grandfather drove them, along with Bailey and a friend and colleague of Anastasiia, to the western city of Lviv, close to the Polish border.

Anastasiia and her friend work for a tech company, which had organized a bus to take people to the Polish border from Lviv.

“The station was extremely busy, but there was still no real panic.

“We started to get a little nervous as the bus was four hours late. I even started to think I could hear sirens when they weren’t actually there.

“When we got to the border, the queue to get out was around 10km. We left for my mother-in-law at 6 a.m. on Saturday and arrived in Krakow Poland at 1 a.m. morning on a Monday, so the whole trip was 43 hours, it would usually be less than 10.

“Those two or three days felt like an eternity.”

Bradley Stafford, his wife, Anastasiia, and their dog, Bailey.

He added: “In the space of five days we slept about 10 hours. In Krakow we booked into an Airbnb and tried to get together and make plans to move forward. The first few days were so weird, even a flying plane heard, a tram could set you off.”

They then stayed with friends in Berlin and Cologne, where they took the time to plan and figure out how to get to Ireland with Bailey.

Mr Stafford’s father met them in Cologne and traveled to Cherbourg in France where they took the ferry to Rosslare.

In total, it took about a month to reach Ireland from the time they left Kyiv.

After finding a house to rent in north Leitrim, they all settled in well and Mr Stafford said the locals were very welcoming.

Bailey is the happiest of them all because she now has a garden, Mr Stafford added with a laugh.

However, they all hope to return home as soon as possible.

“Without wanting to sound ungrateful, and I’m sure many Ukrainians around the world will feel the same way, nobody wants to be there, they want to go home. Despite what’s happening, a lot of people have come back. Of the 2, 5 million who left Kyiv at the start of the war, more than a million have returned.

“I have seen reports that the queues at the border are now longer to get into Ukraine than to get out of it, which I could never have imagined three months ago with crowds of people trying to get out.”

Anastasiia and her friend work remotely, while Mr. Stafford looks for work.

However, he hopes to do something to help Ukrainians and this inspired him to start a GoFundMe which will be used to help people who have been affected by the war.

I was well received by everyone I met, I found my wife there, I found my profession there and my dog ​​is Ukrainian too!

“I started this fundraising campaign and I hope we can come back in August/September and I want to help with volunteering and distribute supplies with the money raised. If we don’t feel safe enough to come back until then I wouldn’t. We wouldn’t hesitate to go back even for a week to help with the relief effort but also to check on our apartment, we’re pretty sure that it’s still standing It’s a building in the center of Kyiv with 36 floors next to a military base, last we heard a month ago it’s still OK.

“After coming out safe from some of the stories I have heard, there is an element of survivor guilt. I hope to raise awareness and ask all of my followers if they can donate or share the campaign I feel like I can help.

“I have raised €1,400 so far, in parts of rural Ukraine, it is equivalent to seven months of work. Many towns north of Kyiv have been destroyed, they have no access to supermarkets, water, public transport, whatever. I found a team of volunteers who travel daily from Kyiv under military surveillance to all these different towns, and they pack a minibus or two with food, cleaning products, medicines, everything necessary.

I am raising funds for the victims of the Russian invasion of Ukraine.

“If I was able to raise anywhere near the €10,000 goal, I set out that this money could help hundreds, if not thousands of people.

“I feel compelled to do this, Ukraine is my home, I have been living there since 2017, my work as a photographer has taken me all over the country. I have been well received by everyone I have met , I found my wife there, I found my profession there and my dog ​​is also Ukrainian!There is a strong bond there, and I want to help in any way I can.

Mr. Stafford has spent the past five years traveling Ukraine and photographing its unique architecture.

With the situation constantly changing, Mr Stafford and his wife hope to return home in August or September.

The Ukrainian woman is still in “survival mode”, but…

“As he returns to a very different country, he wants to use his talent to photograph the destruction of war, as well as people’s efforts to rebuild themselves.

“Each time I come back, I want to document the relief effort in photos and video. It was a pleasure to introduce Ukraine to the world, I managed to generate interest and find a niche. when I return I want to document the war damage but also the rebuilding process, some parts of Ukraine will be very different from what I remember. Entire towns, villages, villages have been razed to the ground.

“They have already started to rebuild bridges, roads. As soon as I return, I will devote myself 100% to showing as many people as possible what life in Ukraine is like.

“News tends to pass and people forget, it is very important that the world does not forget what is happening in Ukraine. I will come back at some point and I will start traveling the country again and photographing it in a form or another. Reconstruction, the untouched beauty that was able to escape the horrors of war, I will.”

Son will reopen the neighborhood library

She wanted a refund for her Vrbo rental. The owner blocked it

The Morning After: New York’s Airbnb listings could exceed the number of…