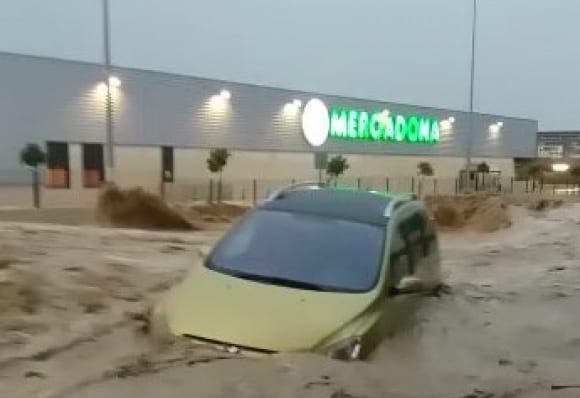 Is your home at risk of flooding in Spain? Valencia and Seville in the three main danger zones

While Spain is frequently ravaged by fires and droughts that devastate the countryside, jeopardize homes and hammer agriculture, there is a third horseman of the apocalypse lurking in the country: floods.

The risk of flooding comes each year as the other dangers recede. Two people are already known to have died in floods this year, including a policeman trying to rescue a trapped motorist in Alicante.

The regions of Spain most at risk from flooding and most susceptible to flood damage have been documented in a new report, with Valencia and Seville making the top three, just behind Barcelona in first place.

The report, from Gamma Location Intelligencecombines the risk of flooding with the potential property damage that would be incurred to determine which provinces have the most properties at risk and an estimate of the cost of flooding.

And the results show that, although the northern coast is the most exposed to flooding, it is the Mediterranean coast that presents the greatest risk of suffering massive damage.

The floods are estimated to have caused €17,531,757 in property damage in the province of Barcelona, ​​which suffered 90mm of rainfall in the Port of Mataro area in 60 minutes on September 16.

Just to the south, in the province of Valencia, homeowners have reason to worry, as €13,878,134 in damage is predicted based on the risk of flooding.

The region was affected by flooding in Oropesa del Mar, Cabanes and Torreblanca, in the province of Castellón around September 17.

Richard Cantwell, a senior scientist at Gamma LI, said: “The effects of climate change are being felt around the world and, although damage from wildfires and drought tends to be more widespread in Spain, floods also occur in the winter months and increase due to the climate. currency.

“In fact, in the second half of 2021 alone there were several serious floods such as in Navarre, Cantabria and La Rioja. Terrible floods have also wreaked havoc in recent months in Murcia, Tarragona and Madrid.

In a year in which Spain suffered €3 billion in forest fire damage to 293,000 hectares burned, flood losses are another specter of climate change looming over the country. country.