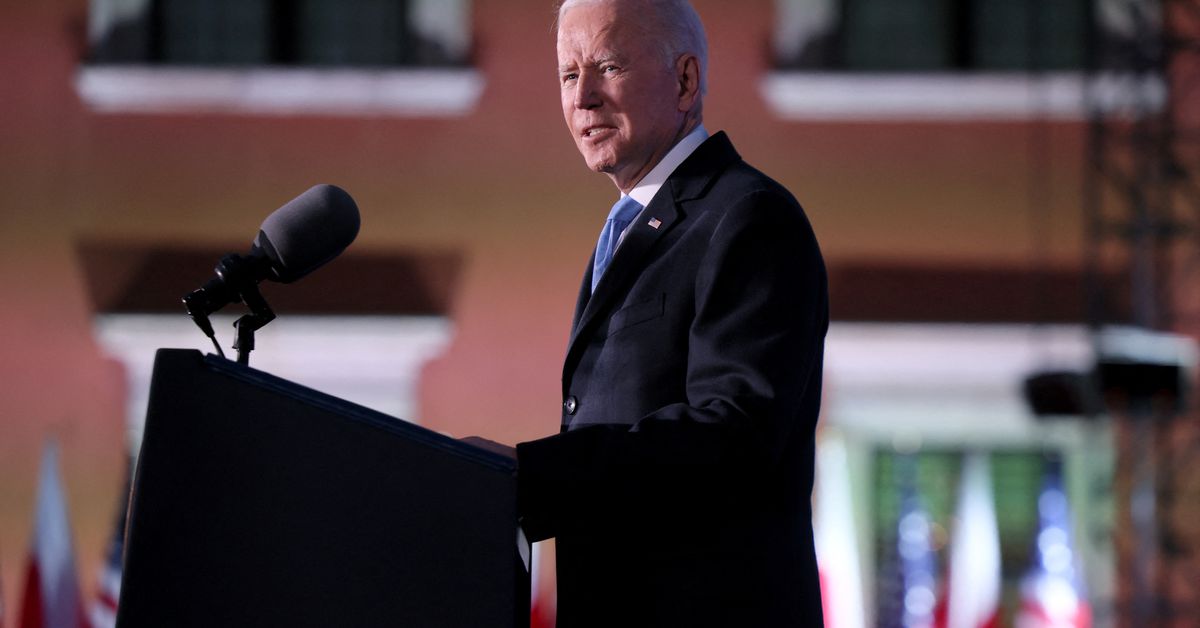 “For the love of God, this man can’t stay in power,” Biden said Saturday at the end of a speech to a crowd in Warsaw. He framed Russia’s invasion of Ukraine as one battle in a much larger conflict between democracy and autocracy.

The White House has tried to clarify Biden’s remarks and the US president said on Sunday he had not publicly called for regime change in Russia, which has more nuclear warheads than any other power.

“We will continue to follow the US president’s statements most carefully,” Peskov told reporters.

Putin has not publicly commented on Biden’s remark – which comes amid Moscow’s biggest showdown with the West since the end of the Cold War.

In his first live appearance since the remark, Putin appeared on state TV on Monday being briefed by Alexander Sergeev, president of the Russian Academy of Sciences, on carbon buildup in shellfish and the use of artificial intelligence to decipher ancient Tibetan manuscripts.

Last year Biden called Putin a “killer”. After that comment, Biden phoned Putin who then said he was satisfied with the US leader’s explanation for the remark.

Such a blunt remark from Biden about the need to end Putin’s power, however, seems to breach the norms of US-Russian relations and also, oddly, align with the narrative of former KGB spies who form the closest circle to Putin in the Kremlin.

“It’s unusual for the president to talk about regime change in such a direct way,” William Wohlforth, professor of government at Dartmouth College in Hanover, New Hampshire, told Reuters.

“But that wouldn’t seem so unusual from Putin’s propaganda perspective, because he often portrays that as the goal of American foreign policy,” Wohlforth said.

Putin’s inner circle, including Security Council chief Nikolai Patrushev, a former head of the powerful Federal Security Service spy agency, have long argued that the United States is plotting a revolution in Russia.

Dmitry Medvedev, who served as president from 2008 to 2012, said on March 23 that the world could be heading for a nuclear dystopia if Washington pursues what the Kremlin presents as a long-term plot to destroy Russia. Read more

Medvedev painted a bleak picture of a post-Putin Russia, saying it could lead to an unstable leadership in Moscow “with maximum numbers of nuclear weapons aimed at targets in the United States and Europe.”

Putin, Russia’s supreme leader since the resignation of Boris Yeltsin on the last day of 1999, sees war in Ukraine as necessary to protect his country’s vital interests from the United States, which he says is determined to world hegemony. He is particularly keen to dash Ukraine’s hopes of joining NATO.

Ukraine says it is fighting for its survival even against an imperial Russian-style land grab that has divided the two largest East Slavic peoples.

Biden’s remark about the end of Putin’s rule overshadowed a speech that had a much larger theme: the battle between democracy and autocracy.

This points to a much longer war, according to Russian aluminum tycoon Oleg Deripaska. Read more

“Now a kind of hellish ideological mobilization is going on all around,” he said on Sunday.

“It seems that all sides are recklessly preparing for a long-term war that will have tragic consequences for the whole world,” said Deripaska, who has been sanctioned by the United States and Britain.

Under constitutional changes approved in 2020, Putin, who turns 70 this year, could stand for election for two more 6-year terms as president, allowing him to stay in power until 2036.

The Kremlin says Putin is a democratically elected leader and it is up to the Russian people, not Washington, to decide who leads their country.